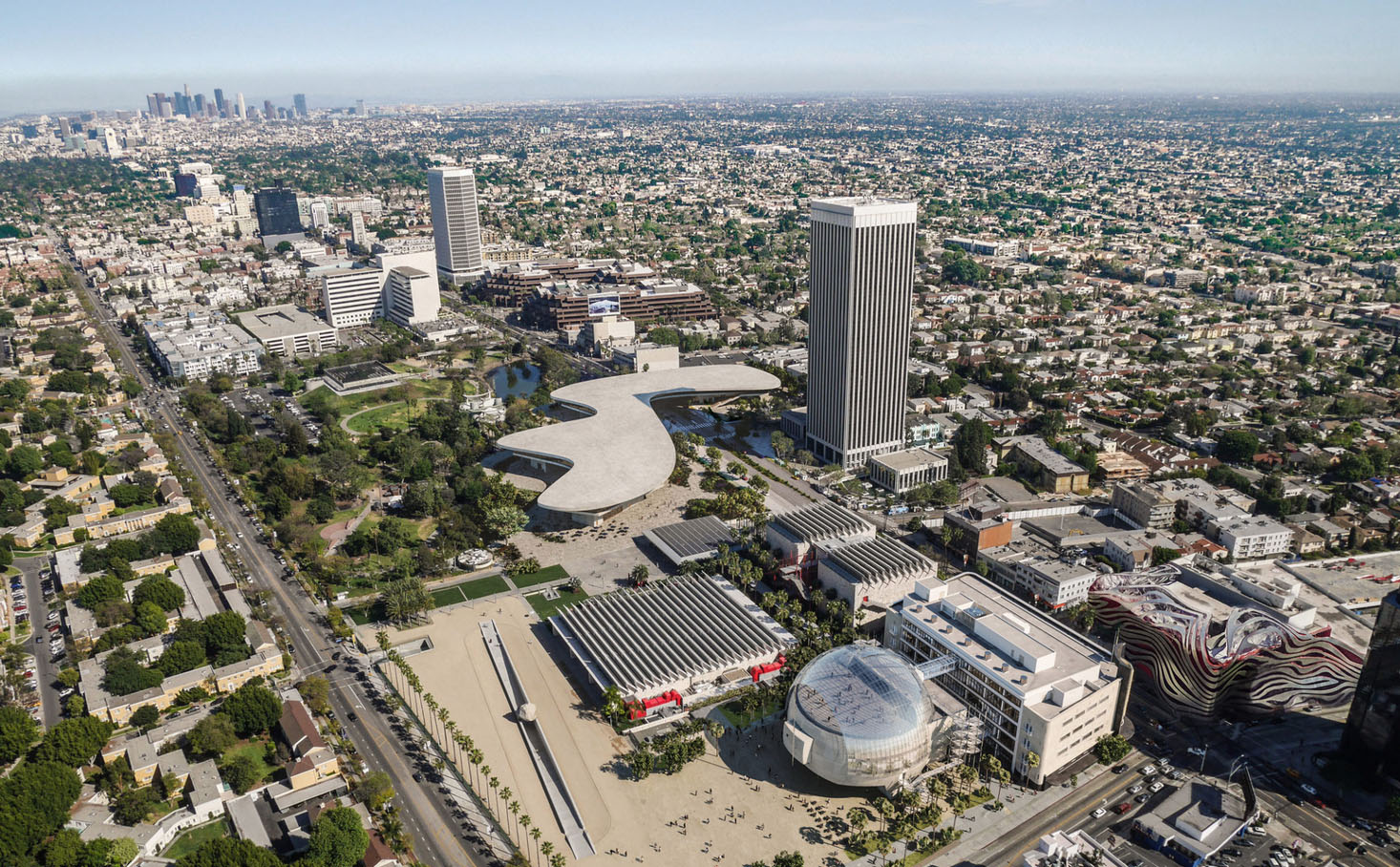 Architect John Southern reports on Michael Govan's recent talk with USC architecture dean Milton Curry on the Zumthor project. The biggest scoop may be a slideshow image of an architectural model revealing—however schematically—the Zumthor building's floorplan. It's the first indication of the interior layout the public has had since 2013.
The model removes the top to reveal 26 rectilinear rooms in an off-the-grid design: Malevich suprematism inside the Arp biomorph. The floorplan has somewhat more rooms and linear wall space than might be evident in the renderings. Linear footage of walls is probably the most relevant single metric in determining how much art can be shown at once (more so than floorspace which, as everyone knows by now, is being cut about 10 percent from the existing buildings' area).

The floorplan has crazy-quilt spaces, partly enclosed by the boxy galleries, that would offer differing degrees of protection from the morning and evening sun. A number of corridors, of different widths, separate rooms. 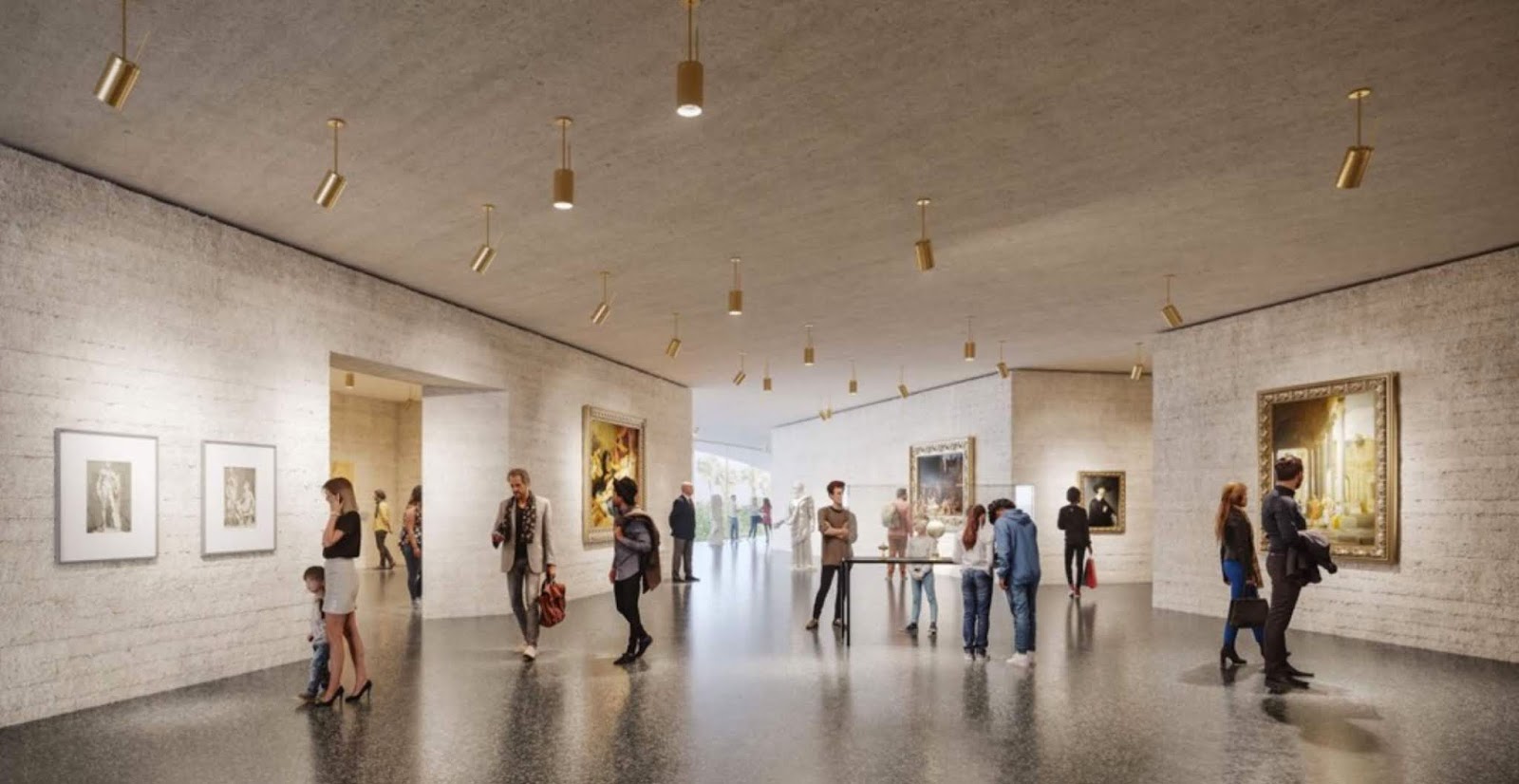 Will the alleys and interstices be dead zones, or will they have some sort of social, experiential magic? That's the kind of thing you can't judge from renderings.
A new exterior image gives the David Geffen Galleries illuminated all-cap signage over Wilshire. It's a choice that leans in to the toll plaza comparisons. 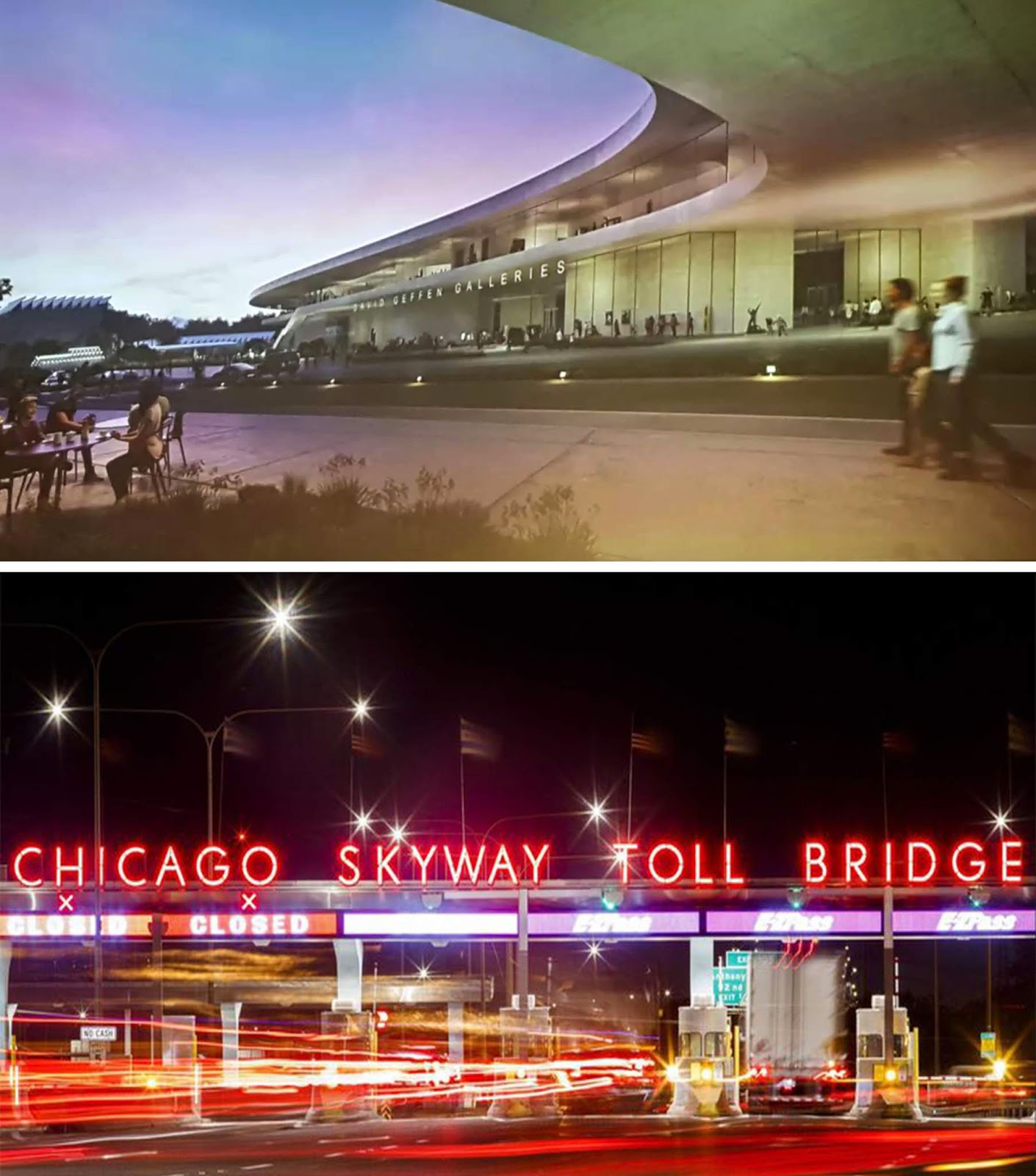 Anonymous said…
How can LACMA's director be encouraged to leave the community? Lure him away to another museum in another city?

Is the Metropolitan, Chicago Institute or Louvre in need of fresh blood?

Offer him a parachute-type deal? A promise of more money above and beyond his pension fund? A promise of a villa in the Swiss Alps, a place in Hawaii, a Mercedes or Lamborghini?

The LA Philharmonic's much-lauded former director relocated to New York City not too long ago. Why can't LACMA's current director do the same thing?
September 9, 2019 at 12:48 PM

Oh, jeez. I didn't even that modification at first.

Makes me think of a few newer British cultural facilities, such as the Royal Festival Hall in London, that have similar store-like signs on them.

Zack said…
I actually think the renderings of the exterior (yes, including the “David Geffen” rendering) are quite elegant. And the article lays out the reasons the museum has made the decisions it did. I know there are many people (particularly the commenters on this blog) who are unhappy with the museum’s direction, but I found this article reassuring. Thank you for linking us to it.
September 9, 2019 at 3:58 PM

Anonymous said…
This goes way beyond merely the look of the Zumthor building.

If it were merely things like cheesy signs or reduced space, that would be bad enough. But the collections are being technically or symbolically stripped down, the budget is being stretched to the breaking point (red ink galore), the curators are being separated from their galleries, the director is into a head trip with "Bleh, encyclopedia-type operations are passe," the auditorium is being downsized, possible expansion areas of the future are definitely a shrug-yawn afterthought, the conservation lab is ending up a what and a where?"

"But other than THAT, Mrs Lincoln, how was the play?"

Anonymous said…
I think the main reason for reduced square footage is that Govan knows $600 million will not be enough to replace the buildings AND add more gallery space. It seems like he's trying to stretch these dollars as far as they can go which makes sense in a business sense, but it's gonna hurt LACMA in the long run once it needs to expand again. However, it seems this is the design we're stuck with. I wish Govan would've at least hosted a design competition. I'm not sure why he's so settled with Zumthor's proposal. If this was Palm Springs, then I would say go ahead, but this design does not fit LA's aesthetic at all.
September 10, 2019 at 8:48 AM

Anonymous said…
It's not just the Zumthor plan that's so foolish and irresponsible. It's all the other things too. It's the harebrained notion that satellite branches of LACMA reflect some kind of a good-steward policy. It's the fact that LACMA is reportedly one of the most indebted museums in the country. It's the bait-and-switch maneuvering of Govan in general that is making him the Darth Vadar of LA's cultural scene.
September 10, 2019 at 2:24 PM

Anonymous said…
"... Zumthor puts LA back in the game."

By making LACMA that much more of an also-ran compared with the Metropolitan, Chicago Institute, National Gallery of Art, Boston Institute of Fine Arts, etc, etc? .
September 12, 2019 at 4:28 PM

Just this month, the Chicago Institute hired an architectural firm to make sense of its labyrinthine campus.

Before the sex scandal in the Director's Office and budget deficits , the Met thought they had a plan to make sense of their own "sprawling" campus. (The budget deficits also put an end to the Met's poaching of Getty staff.)