In Western art, animals are foils to humans or comic relief. In Japan animals are often the main subject of paintings or sculptures. A picture of an ox can be pious, philosophic, funny, or all of the above. LACMA's "Every Living Thing: Animals in Japanese Art," curated by Robert Singer and Kawai Masatomo, is a large show covering a lot of territory: nearly 200 objects in diverse media from 5th century to just about now. Despite its size, it's about the most family-friendly international loan exhibition you'll find. (Actually, the show is reduced by a hundred or so objects from the initial presentation at the National Gallery, Washington. DC had Takashi Murakami's 82-foot painting, In the Land of the Dead, Stepping on the Tail of a Rainbow, owned by the Broad.)
One of the prize loans is a pair of Inari foxes from a Shinto shrine. They're said to be the earliest pair known in wood. The fox on the left holds the key to a granary; the one at right mouths a treasure ball.
Utagawa Yoshifuji's woodblock print The Bewitched Cat of Okabe (about 1847-48) treats a shape-shifting witch who devours unlucky travelers. Utagawa imagines the cat-witch as a monstrous feline face made out of cats. The eyes are cat toys, and the tongue is tied into the bow collar of Japanese pets. The print out-weirds Louis Wain and seems to reflect knowledge of the Archimboldesque meme of European art. 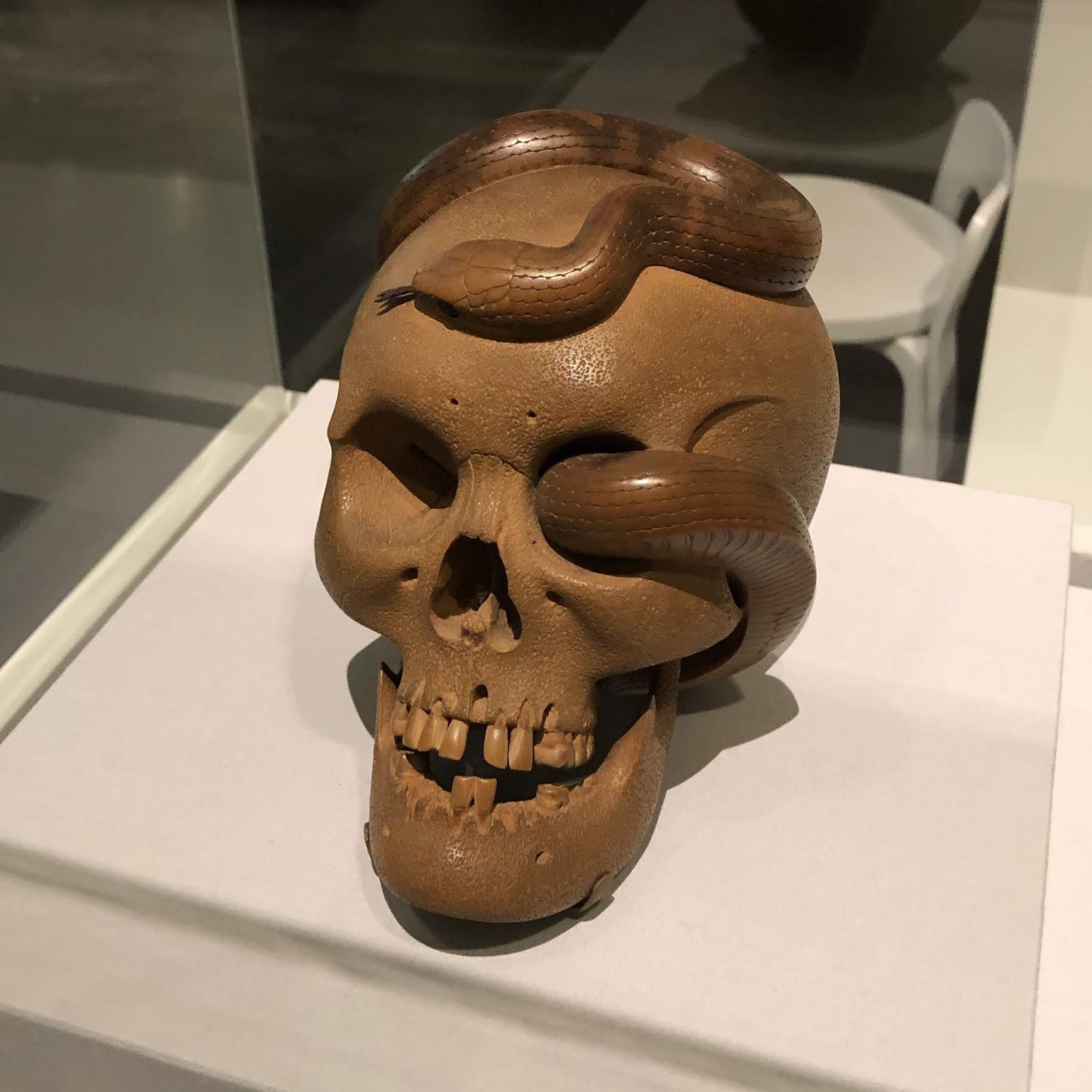 Many of the later works are intriguingly hybrid. Izumi Magouemon's boxwood Skull and Snake (about 1892), conceived as a Western-style memento mori, won a prize at the 1893 World's Columbian Exposition, Chicago.
Maruyama Okyo studied Western art and even pre-photographic stereographs. He was one of the first Japanese painters to observe nature with scientific precision. In Cranes the hyperreal birds are presented without landscape backgrounds. Okyo's influence continued through the Meiji Period.
Washimi Shungaku's Myriad Fishes (mid-to-late 19th century) is a 2017 gift of Lenore and Richard Wayne. Anticipating certain posters seen in Florida sports bars, it's an earnest attempt to grapple with the diversity of the natural world—a blend of natural history, caricature, allegory, and absurdity.
The deluxe minimalism of European Art Deco resonated with many Japanese artists. Witness Yamamoto Kozan's small, sleek Rabbit—a white bronze incense burner—and a rabbit Table Clock by Neya Churoku, probably 1920s or 1930s.
"Every Living Thing" has two monumental works of calligraphy by the two greatest practitioners of the 1960s, Morita Shiryu and Inoue Yuichi. The former's Dragon, a four-panel screen, employs such innovations as aluminum candy flake and alkyd varnish to express the character for "dragon" as a gestural pictograph.

Anonymous said…
Other than the Pacific Asia Museum in Pasadena, what other institution in the LA area exhibits works from Japan, Korea, China, etc?

At least the Japanese Pavilion isn't being ripped down. But will the position of curator for Asian art at LACMA be combined with the curator of prints and drawings? Or maybe the curator of Islamic art? Or maybe with the head of the museum's janitorial services?

With the museum of Govan/Zumthor, one can never be sure what the hell is going on. Anything positive that is.
October 22, 2019 at 2:24 PM

The Dreamer said…
...And just like clockwork, he strikes again with another Govan/Zumthor rant haha
October 22, 2019 at 7:13 PM

Anonymous said…
If you give a damn about LA's publicly owned, presumably general-category, encyclopedic-type museum, you better gear up some of your own clockwork too.

This is a glimpse of what the ongoing debacle of 5905 Wilshire Blvd has in store for everyone: