The Getty Center's "La Surprise: Watteau in Los Angeles" brings together "all the works in Los Angeles by the artist." Despite that claim, one L.A. Watteau is conspicuous by its absence. It's the big, disputed Italian Comedians that the Getty bought in 2012 as the museum's first Watteau (maybe). That painting is on view a few galleries away (room S203), labeled as a Watteau and hanging next to works by Chardin and Fragonard. But the museum has ghosted it from the "La Surprise" exhibition, without so much as a text panel mention of its existence. I'd read that as a passive-aggressive vote of no confidence. (Getty painting curator Davide Gasparotto says the large Italian Comedians would have created "great imbalance" next to the smaller paintings and drawings.) 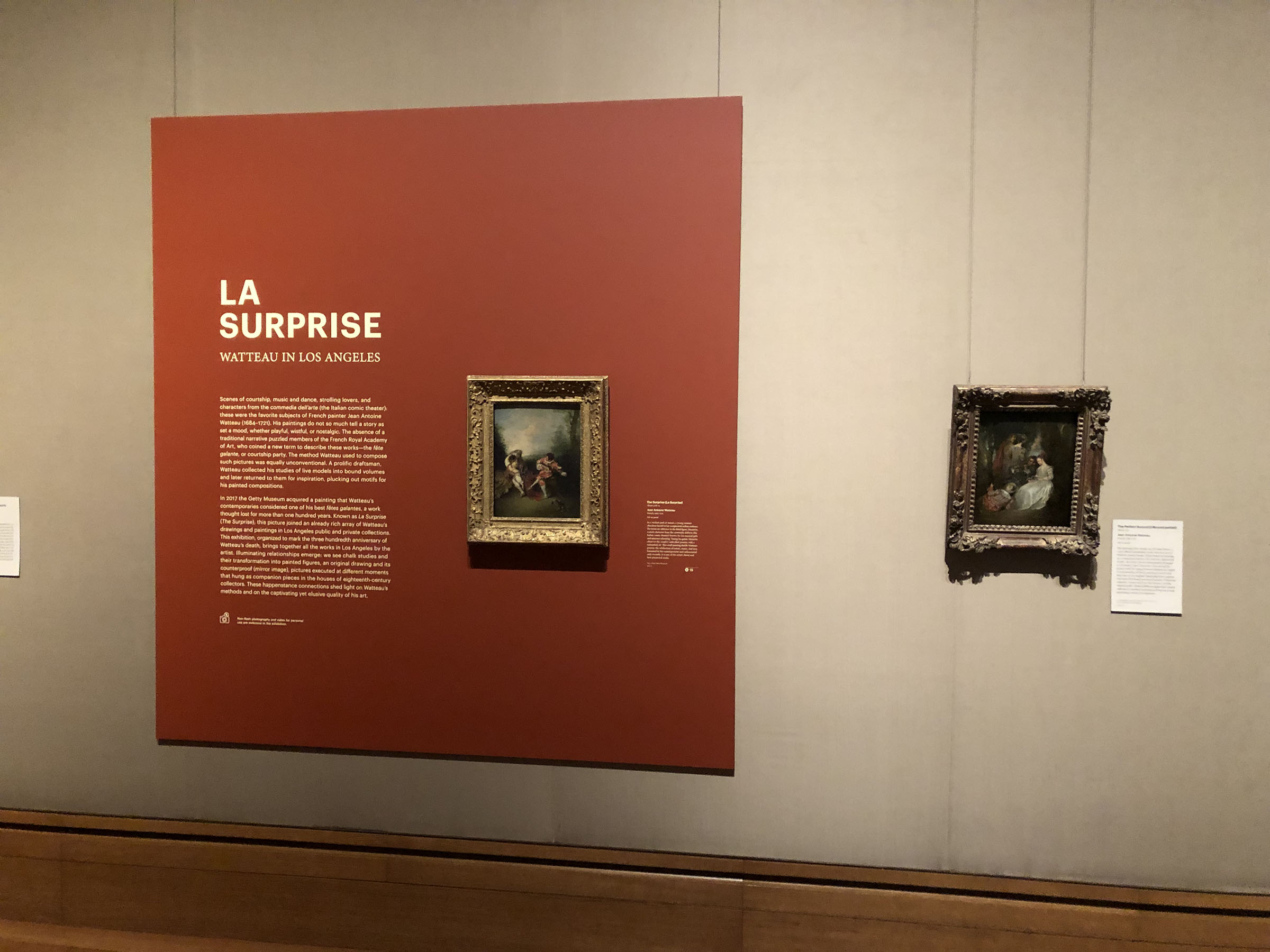 Former Getty curator Scott Schaefer bought The Italian Comedians, a bold move given that scholars were split on its attribution. Schaefer believed it was likely to be autograph. In 2017 Schaefer's successor, Gasparotto, bought the small, unquestioned La Surprise as "undoubtedly one of the most exquisite and important Watteau paintings to become available in modern times" (and not mentioning the one the museum had bought only five years previously). Since then the Getty and its two Watteaus have been like the Distracted Boyfriend meme.

A companion publication, Watteau at Work, is more forthcoming than the show itself is. An essay by Emily Beeny reports that "with acquisition budgets curtailed by the economic downturn of 2008, no museum was in a position to pursue La Surprise" when auctioned on July 8 of that year. (It then went for $24 million.) Four years later, the Getty bought The Italian Comedians for an undisclosed sum. Then in 2017 rebounding markets made possible the spectacular group acquisition of La Surprise and drawings by Michelangelo, Rubens, Goya, and Degas.

The publication reproduces The Italian Comedians and summarizes its history. The painting's provenance goes back to the 18th century, but so does the controversy over its authorship. The picture is unusual for Watteau in its scale (almost 51 inches high), bold brushwork, and cool palette. The figures are familiar from accepted Watteau paintings and drawings (which is in keeping with the artist's habit of recycling figure studies). Watteau experts have pointed out some awkward passages while concurring that the painting's overall quality is beyond that of any of the known followers or early copyists of Watteau.

The most significant technical point in favor of Watteau's participation is that the white-suited Pierrot closely follows a Watteau drawing in the Teylers Museum, Haarlem, that has the head looking downward. Imagery shows that Pierrot's head was originally downcast, then repainted to have him meet the eyes of the viewer.

It's been proposed that the Italian Comedians was begun by Watteau and completed by another artist—making it a Polish Rider of sorts. This was apparently the median opinion in 2012, and as far as I can tell, opinions have not shifted since then. Like pandemics, attribution disputes resolve in their own time, and that may not be our time.

UPDATE: See Davide Gasparotto's comments below (fourth post). The Getty performed technical investigations on The Italian Comedians before the exhibition and plans to convene a panel of Watteau experts to discuss its attribution.

P.S. The exhibition's surprise loans are from from L.A. collectors Ariane and Lionel Sauvage. They've lent three paintings and several drawings, some relating to works in the city's museum collections.

Anonymous said…
Even if its attribution is disputed, I'm not sure why the Getty chose to snub Italian Comedians. They could've at least shown it in the exhibition and let viewers decide for themselves.
December 20, 2021 at 10:04 AM

Ted Gallagher NYC said…
That painting is so awesome I don't even care if it's not a Watteau. Whoever made it deserves une médaille!
I saw it ages ago at a Watteau exhibition at the Met. It seemed so modern compared to the staid "French Comedians" in the Met collection.
If Getty wanted to be responsible, it should have included it as an attributed work.
Great question: who else could possibly have done it but Watteau?
December 20, 2021 at 11:28 AM

Ted Gallagher NYC said…
Further...
And if Getty is so concerned about authenticity, why does its website assign the work to Watteau, with no equivocation?
They talk out of both sides of their mouth.
Just sayin'.
December 20, 2021 at 11:49 AM

Davide Gasparotto said…
I believe that your interpretation of our choice is too subtle. The "Italian Comedians" is included in the exhibition and discussed in the catalogue, it is just not included in the gallery because - with its size - it would have created great imbalance within the display, which is focused on drawings and paintings of smaller scale, centered on the theme of the courtship party. Since the beginning, the exhibition was meant to celebrate "La Surprise". That said, I cannot deny that the "Italian Comedians" is a painting of disputed attribution: since its acquisition, scholars of Watteau were divided about its status as an autograph work by the painter. We have performed new technical investigations on it prior to the exhibition and we intend to address the question of its attribution with a group of Watteau scholars at the end of the run of the show. In the meantime, as you noticed, the label still bears the attribution to Watteau. This may or may not change in the future.
December 21, 2021 at 12:37 AM

William Poundstone said…
Thanks for the clarifications, and I've added an update.
December 21, 2021 at 7:48 AM

Ted Gallagher NYC said…
I hope the scholars' denouement is live-streamed for us COVID hostages on the east coast.
First I've ever seen even a photo of Watteau's "The Ogling Woman." Very Titianesque in coloring and mood. Beautiful.
December 21, 2021 at 8:14 AM

Anonymous said…
Thank you Davide for posting here. Of all Watteaus’s I’ve ever seen, the Getty’s Italian Commedians has had the greatest impact on me. The Pierro is so complex and full of emotion, it’s magical. Sometimes melancholy, sometimes happy, sincere, quiet… I have not seen many large Watteaus to know how he economized working on such a grand scale and that’s how I reconcile it against more detailed smaller works, but the playfulness and emotions, the composition and directness, it’s brilliant and different. But for an artist comfortable and successful working at a much smaller scale, I can’t imagine him turning his practice over to grand painting. I would think he would be happy with one offs of this scale and moving on to the next albeit small invention.
December 21, 2021 at 11:02 AM

Interesting reading comments from both insiders and the public.
December 21, 2021 at 2:54 PM

Anonymous said…
So, anybody know the outcome of the technical analysis and the discussion with scholars?
April 1, 2022 at 4:07 PM