LACMA has been doing a large show of Viceregal (a.k.a. Spanish Colonial) art every few years. The latest is "Archive of the World: Art and Imagination in Spanish America, 1500–1800." Though drawn from the permanent collection, it's big in ambition, spanning three centuries, the whole of Spanish America, and a gamut of media: paintings, furniture, silver, decorative objects, sculpture, and textiles.

A generation ago, LACMA's Viceregal holdings amounted to the Hearst Chalice (donated by William Randolph Hearst in the 1940s and believed to be Spanish Renaissance, not Mexican) and some textiles from Miss Bella Mabury, another patron of the mid-century Los Angeles County Museum. Neither LACMA nor most American museums had much interest in this field. Precolumbian antiquities were prized (because they were "modern"), as were the Mexican muralists. That left half a millennium of post-conquest art that was dismissed as provincial, derivative, hybrid—and very, very religious. Both the public and critics tended to like their post-Renaissance art secular.

Palm Spring collectors-dealers Bernard and Edith Lewin made a good living catering to the taste for Mexican modernism. In 1997 the couple bequeathed their 2000-plus piece collection to LACMA. It was a mixed bag. Several dozen paintings were museum-worthy, if not tent poles of a collection. The vast majority of the trove was dealer's stock. Under the direction of LACMA curator Ilona Katzew, the museum sold off the lesser pieces to found a new collection of Viceregal art. This move was a textbook example of the good kind of deaccessioning. Newer, lesser art was sold to buy older, more important work—all with a clear plan, in this case that of adding a rare volume to LACMA's would-be encyclopedia.

A unique Folding Screen with Indian Wedding was the first major painting bought with Lewin funds, in 2005. It epitomizes the 17th-century globalization of the art world. Made in Mexico, and recording Indigenous marriage customs and spectacle, the folding screen format must have been inspired by Asian examples. The oil on canvas medium and Baroque naturalism are European.

The current exhibition's title is taken from the 1728 account of Jesuit chronicler Manuel Herrara:

Two worlds have given Mexico all their splendors, and two oceans all their riches: Europe offers all its beauties, Asia all its precious objects, and Africa all its adornments. Nature not only graced Mexico with great abundance but also granted her the most precious of metals, enriching her with all the fineries of the world: tapestries from Cairo, textiles from England, glass from Venice, rock crystal, patterns from Antwerp, porcelain from China, linen from Cambrai, lace from Flanders, braids from Milan, pearls from the Orient, diamonds from India, and antiquities from Rome. Bejeweled with everything, Mexico is arguably the archive of the world.

The show and its catalog brim with new scholarship. Deluxe mother-of-pearl and tortoise-shell objects, found in old collections from Mexico City and Lima, have puzzled scholars. Were they made in China, Mexico, or Peru? The answer appears to be none of the above. They were made in Guatemala, and LACMA now has several prime examples.

Any show of Viceregal art poses more questions than answers. That's part of the fun. This one adds another question: How long can the Lewin largesse last? Even given a massively inefficient art market, Katzew seems to have engineered a perpetual motion machine, minting tomorrow's art history from yesterday's market dross. "Archive of the World" introduces about 20 recently acquired works, most bought with Lewin funds, such as the Holguín Pietà. I see no indication that the acquisition rate of truly great works has slowed. Still, prices for Viceregal museum pieces are rising as surely as for gas—and there's only so much of it to go around.

The gold bowl, originally for a flour ground from the root vegetable known as yuca in L.A. markets, is the only object in the show from Portuguese-speaking Brazil.
Purchased in 2019, the Holguín Pietà underwent an extensive conservation campaign and is here making its debut. It was LACMA's first Bolivian painting, but no longer its only one. It's shown with another large painting by Joaquín Caraballo, a leader of a late 18th-century Holguín revival.
The Cuzco school was a group of Indigenous artists in the former Inca capital who embraced European themes while rejecting Baroque perspective and naturalism. A newly acquired Defense of the Eucharist and Charles II lionizes the Spanish King (literally: the lion is at lower left). At right two Muslims and a clueless Protestant make a bumbling attempt to topple a Catholic monstrance with flimsy ribbons. The painting is shown next to a very similar monstrance made in Cuzco at about the same time. 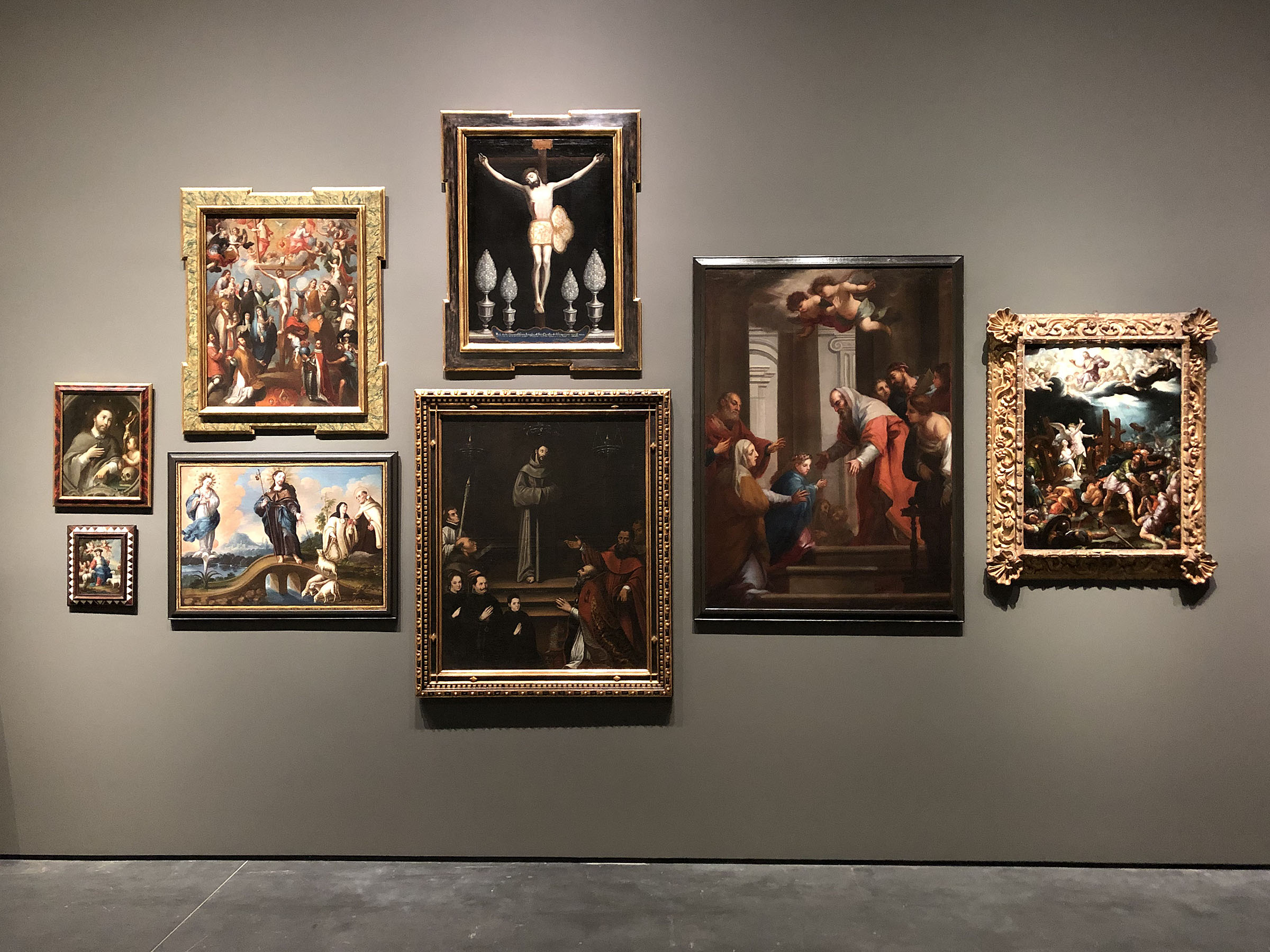 A section of "Archive of the World" explores the use of copying in Viceregal art and argues that copies need not be such bad things. A Morlete Ruiz history painting is shown next to the larger(!) Bernard Picart print that inspired it, itself a reproductive work after a mega-painting by Charles Le Brun that Morlete Ruiz never saw. At this remove from the original, a copy may entail considerable invention.
Enconchados are a New World invention: oil paintings inlaid with mother-of-pearl. The exhibition has three examples, one a Virgin of Guadalupe by Miguel González.
The Spanish-Mexican Count's portrait is shown with a c. 1755 French suit similar to one he was wearing.
This polychromed and gilded statuette (20 in. high) is another example of the elaborate work produced in Guatemala. The devil has glass eyes and teeth carved from bone.(Unless otherwise noted, all objects were purchased with the Bernard and Edith Lewin Collection of Mexican Art Deaccession Fund.)
Email Post
Labels: Bernard Lewin Cuzco School Edith Lewin Ilona Katzew LACMA Melchor Pérez Holguín William Randolph Hearst

Anonymous said…
Who says something like this --- "for those of us who love art history"?
Think about it. What kind of fool says that?

Speaking of fools, the LA Times doesn't get the story again. Here is the NY Times on the opening of The Cheech:

Ted Gallagher NYC said…
In reply to anonymous, above:
Everybody says art history, including virtually every curator in this country with a PhD in, uh, art history.
Any road, I, for one, love art history, too.
June 14, 2022 at 4:43 PM

Anonymous said…
> For those of us who love art history, it’s nice to see that
> LACMA still buys art made before 1960. How refreshing.


But since the museum is increasingly driven by the goals and interests of hipsters and the nouveau riche, even art from 1959, much less 1650, is treated as not au courant enough.

Given that LA already has MOCA, the Broad and the Hammer - much less places like Hauser & Wirth - LACMA shouldn't be so much into creating the ideal selfie moments.

I have a PhD in Comparative Literature.

I found fault with the entire phrase, not the term "art history."

It is fatuous to say "for those of us who love art history."