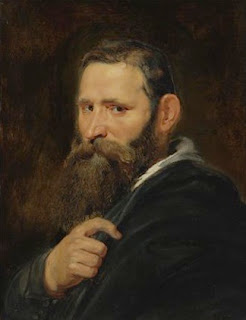 The Los Angeles County Museum of Art is selling 17 European paintings at Sotheby's June 4th sale in New York. The works on the block include big and bigish names — Rubens, De Hooch, ter Borch, Angelica Kauffmann — and a few pictures that might be familiar to regular visitors, such as Jan Steen's likeable The Twelfth Night and Jean-Baptiste Greuze's icky Girl with a Lamb. The Rubens, a Head of a Bearded Man (pictured), has not been on view in living memory (though it was featured in the museum's 1946 blockbuster, "Rubens and Van Dyck"). It, the De Hooch, and the ter Borch (below, The Card Players) are the most valuable works, each estimated at $400,000 to $600,000. The Sotheby's catalog includes the usual disclaimer: "to benefit future acquisitions." 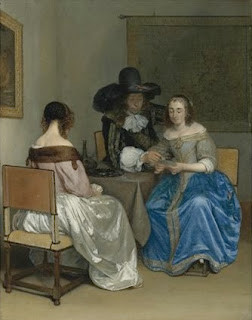 The sale continues the museum's aggressive approach to upgrading its collection. As in a previous purge, the museum is not shy about relinquishing its only work by an important artist. The ter Borch and the De Hooch, though not great, are LACMA's only paintings by the artists (and since it ain't got a Vermeer, the sale won't leave much in the way of Dutch genre scenes). Clearly the superb Edward and Hannah Carter paintings have raised the bar for the Dutch galleries.
The only puzzle: why sell this very instant, into a slumping art market?
Email Post
Labels: deaccessioning LACMA Peter Paul Rubens Sotheby's

Unknown said…
While always controversial when a museum sells works from its collection, it is hard to argue that most of these paintings add anything to LACMA'S collection of old masters.

However, I do take exception to the inclusion of the paintings by de Hooch, ter Borch, Steen, and Bol on this list. None of them are masterpieces, but each one illustrates an important aspect of Dutch painting. The loss of these paintings clearly diminishes the importance of the collection of Dutch old masters at the musuem. The de Hooch and the ter Borch are about the only Dutch interior paintings of everyday life in the collection. Although LACMA has a better Steen- "Samson and Delilah", Steen is better known for his comic paintings of taverns, celebrations, and other works satirizing Dutch society. "The Twelfth Night" is one such painting and selling it off leaves LACMA with no example of this important aspect of Dutch art.

I object to the selling of the Bol for other reasons. It is a very mediocre painting. The musuem's earlier "Self Portrait" by Bol is the better picture by far. It was painted while he was still heavily influenced by Rembrandt and is an important example of Rembrand't circle. Bol's style changed and he came under the influence of French fashion as exemplified in the "Portrait of a Gentleman" that the museum is selling. This is not a painting that should be regularly exhibited, but isn't educating the public one of the primary purposes of a museum? What better way then to have two examples of an artist's work, showing the change in his style? This would also illustrate the broad changes that took place in Dutch painting after 1670. The later period is not as highly esteemed, but how would the public understand this if they could never see an example of late Dutch painting?

The presence of the Rubens portrait on the auction bloc also surprises me. I didn't know it was still in the musuem's collection. I have regularly visited LACMA for over 20 yrs and have never seen this on display. Again, while not a great work, if it is a genuine Rubens (which it appears to be), then it can't be entirely without interest. As anyone who has visited LACMA in the last few years can testify, there are other paintings clearly inferior to this that have been regularly hung.

The Carter paintings are by far superior to any of the works I have mentioned, but they are limited to still life, seascapes, architectural view, landscapes, and interiors. The loss of the paintings I mentioned above leaves LACMA's collection of Dutch old masters with less balance and sadly diminished.
June 1, 2009 at 9:22 PM