Genesis in Westwood, Apocalypse in Pasadena 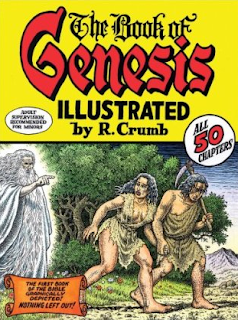 The Hammer Museum is pairing its great Burchfield/Gober show with another fascinating yin/yang smackdown: Robert Crumb meets the book of Genesis. Crumb has illustrated the entire text as a comic book. It's being published (in hardcover) this month by W.W. Norton. Crumb went to great efforts to achieve such historic accuracy as is possible, rejecting early drawings that made the costumes look like modern bathrobes and the tents resemble something from REI. The Hammer show presents all 207 of Crumb's original ink drawings. The scope of the project may be the problem. By hewing so closely to a given text and to historic accuracy, there is little scope for the transgressive invention that Crumb is known for. It's tough for Rachel to compete with Angelfood McSpade. 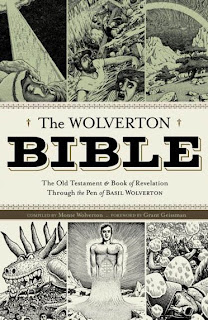 Comix fans and bible fans will also want to check out the Basil Wolverton Bible, published late last year. Unlike Crumb, Wolverton was a true believer, a disciple of Pasadena's Herbert Armstrong and his scandal-riven Worldwide Church of God. From 1952 to 1974 Wolverton illustrated the bible for Armstrong, even as he was working on Mad magazine and such relentlessly lowbrow classics as Brain-Bats of Venus. Wolverton's art-world following best appreciates his illustrations of apocalypse, which was no theological abstraction for him. Herbert Armstrong announced the world was to end in 1975, with end-time tribulations beginning in 1972. As it developed that Armageddon wasn't arriving on Armstrong's timetable, the church fell into chaos, exacerbated by the skirt-chasing of Herbert's son and heir-apparent. All of this complicated fund-raising. That and Wolverton's failing health put an end to his illustration project a year before scheduled zero hour. Ray Olsen wrote, "Wolverton’s faces have only a handful of types and expressions, and he couldn’t do foreshortening. His Book of Revelation drawings, full of grotesque horror, are more impressive than the others; but altogether his religious art demonstrates that he was kind of the Douanier Rousseau, the Grandma Moses, of comics."
Email Post
Labels: Basil Wolverton Hammer Museum Herbert Armstrong Robert Crumb