Wheeling and Dealing with the “Pope” 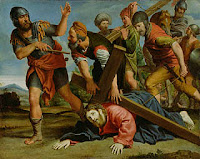 Martin Bailey, writing in The Art Newspaper, has details of an only-in-UK scandal. It seems that art historian John Pope-Hennessey (alias the "Pope") got a pass on Britain's export laws when he moved to New York in 1976 to head the Metropolitan Museum's European painting department. In a letter, Pope-Hennessey pointed out that his paintings "are bequeathed to the Ashmolean [Museum] in my will, and though I cannot, of course, give an undertaking that none of them will in [an] emergency be sold, I should be very sorry if the Ashmolean were deprived of them." The export license was granted. Weeks after arriving in New York, the "Pope" sold his best painting, an Annibale Carracci, to a London dealer. Six years later, a Domenichino (The Way to Calvary, pictured) went to the Getty Museum. The "Pope" had paid 38 pounds for his Domenichino; he claimed the sale price to the Getty was $750,000.
Email Post
Labels: Annibale Carracci Domenichino Getty Museum John Pope-Hennessey