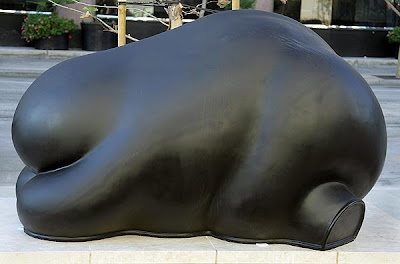 In 1969 architect James Wines coined the term "plop art" to describe the lame abstract sculpture being installed on sterile corporate plazas. The clever usage, punning "pop art" with scatology, caught on. Wines felt that abstraction had become the new academic style and hoped for more adventurous choices in public art. Those who never liked contemporary art's guts in the first place appropriated the term, too.

"Plop art" was used to deride Richard Serra's Tilted Arc (left), an innovative, site-specific piece whose placement frustrated those whose work required them to trudge across this specific "site" daily.
Intentional or not, LAPD Chief William J. Bratton recalled Wines' witticism when he likened Peter Shelton's new sixbeaststwomonkeys (detail, top) to "some kind of cow splat." It's become the latest public art cause celebre, rating an 1126-word defense of Shelton by the LA Times' Christopher Knight and a 786-word rebuttal to Knight's article by the ubiquitous Donald Frazell. (Frazell to Knight: "OK CK, this is war.")
One point on which essentially everyone agrees is that public art is a unique medium. Its priorities are distinct from those of the less public art of museums and galleries. There are two main approaches to public art. One is to please art-lovers and minimize offense to everyone else; the other is to please everyone else and minimize offense to art-lovers.
Like Tilted Arc, sixbeaststwomonkeys embodies the first approach. Shelton is a serious artist with a serious following. That isn't to say that everyone who likes serious art likes Shelton. Art doesn't work that way. However, one gathers that most of the Shelton-haters wouldn't have been any happier with a Robert Therrien. They don't like contemporary art, period. Probably they don't spend much time contemplating Claus Sluter, either. 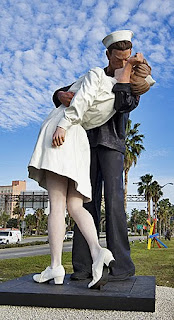 The second conception of public art is that it should please the public. The problem with that is that it's near-impossible to please a public that doesn't care about art in the first place. (The Dodgers can't do much for people who hate baseball.) Sarasota, Florida, is agonizing over this paradigm. Sculptor and Johnson & Johnson heir J. Seward Johnson has created a 26-foot-high polychrome piece, "Unconditional Surrender," (right) based on the famous black-and-white Alfred Eisenstaedt news photo, "The Kiss." Johnson's sculpture was installed at a prominent location in Sarasota, sparking an effort to raise money to buy it for permanent display. The donors tended to be wealthy WW II vets who'd retired to the region. The haters were Sarasota's also-considerable art community, who find the Johnson piece embarrassing. So far, the pro-Johnson claque has been unable to raise the $675,000 price tag — more than the $500,000 of public money that paid for LA's Shelton.
There's little question that sixbeaststwomonkeys is a prime example of what Shelton does. The question is whether Shelton has failed as a public artist by offending Bratton (as he indisputably has). The Times' Steve Lopez wrote that Bratton drove by the installation, then walked by it to see whether "it's as ugly up close as it is when you're driving by." According to Lopez, "The answer was yes, and he sounded mad enough to have the artist arrested."
Of course, Bratton is one person. If every average Joe and Jane comes to hate sixbeaststwomonkeys in perpetuity, then Shelton has failed as a public artist, no question. It's way too soon to conclude that. How many of the complainers have seen the work or ever will see it? How many are seconding a populist sentiment without reflecting whether they truly give a damn — about sixbeaststwomonkeys or any art?
Email Post
Labels: Christopher Knight Donald Frazell James Wines Peter Shelton plop art public art Steve Lopez William J. Bratton

Donald Frazell said…
Bad art is bad art, doesn't matter the style. Public art must emphasize one aspect of creative art over the other two. It must define who WE are. Exploring nature and searching for god are not really appropriate, unless in those venues. This is part of a public building of secular and governmental use. It should reflect this use as part of who we are. After all, WE paid for it.

Artists should be on commission much more than they are, most want to whine and "express' themselves. Not one of creative arts focuses, simply part of what we all do anyway. Its a given, to emphasize it is to maximize the minimal. Small thoughts end up in small deeds.

Many great works of art have been as commission, most actually up til the nineteenth century. One should pay a little attention to the venue, and its needs. There is art in everything, and there is no unworthy motif. One should have been found and reflected in the art of this site. Not some artistes "cleverness". Thats irrelevant. Who cares? Certainly not the people who will be viewing it, as shown in the vast majority of those responsidng who work there.

The things are not revolting or obnoxious, just silly and a waste of precious resources in a time when the Age of Excess is over. We must be more careful with our resources. And thoughtful, and most importantly, knowledgable of what is needed. But as art schools dont teach history and science and theology except in a very constrained and self-focused way, this is what we get. Blobs, souless, without purpose, just stuff. Exhibitionism of the artiste, not of who WE are.

And so it is failed already, it never even attempted to address its reason for being. The needs of the site. A string of works is fine, if that is one of the requirements. But these are more appropriate in a childrens zoo. Smaller, so kids can climb them. Maybe a slide from the "monkies" on down. That about the level of skill here, actually far higher abilities in those areas of creativity than "fine" art. As thats where the talent has obviously gone. Where people tackle a problem,and come up with solutions, you know, work.

Something more ecologically minded would be much better if the police and people of the city are not to be the motif. A forest with water, or Southern California plants for a retreat in the noise and pressures of the city would have been much better, and cheaper. And would touch the soul. Artistes should go into more "green" works to make the city more livable, emotionally healthy, and spiritually calm if they have nothing worthwhile to say.

We should be saving the Rodia Towers rather than wasting funds on things like this. They are truly important, the most creative public edifice in California by far. Yet ignored by those of the artistes sect. Too far from the bistro's and galleries of those who dont work for a living. As these horse puckies reflect. Cerative art must get back to us, over I. The small and insular art world needs to open up, realize they are no more, or less, important than anyone else. And that they have a role in society. It is time they assumed that responsibility, for there is no freedom without it. And this is definitely a mini-mob mentality, of lemmings tied to an illusion of virility. when it truly reflects impotency.

Donald Frazell said…
And it is not an either or situation. Not kitcshy realism vs childish conceptualism. There is a third way, what art has always been, and will always be. Both of these are absurd, reflecting mini audiences. But of the kissing couple make those around it feel better so be it. It will be destroyed later, its their money after all.

But the blobs are OUR money. And reflect only the self interested concerns of the gallery/academic/museo complex. Those who want to create career over art. Neither of these continue arts concerns, but are tangents into self worship. One must know the past and build upon it, there is none in either.

Modern art did not ignore the past, but incorporated more, of other cultures, and the new industrilized and technological world. We need to do so once again. Are must be relevant once more. It must fulfill its purpose adn role in humanity. It has failed to do so for fifty years now, the creeping careerism of the Academy stifling all emotion, all searching, all connectiveness of us as one. The splintering for marketing purposes must end. It is about US, not I.

Anonymous said…
I have been reading and looking some info about Plop! Splat, and wow I have no idea that in the web were so many blogs related to generic viagra, but anyways, thanks for sharing your inputs, they are very informative.
Have a nice day
May 26, 2010 at 3:04 PM