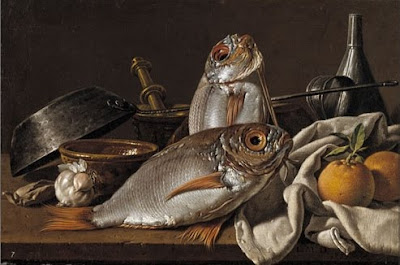 Good art is not supposed to push emotional buttons, yet it does so all the time. An example is the oddly durable conceit of a brilliantly lighted still life presented inexplicably against an inky black background. Pioneered in 17th-century Spain, it has been revived periodically, notably by the 19th-century American Raphaelle Peale (left, Blackberries).

Maybe even the Tijuana school of black velvet painting owes something to it — the creepiness of bright images on black comes through regardless of skill. One of black-ground painting's highest exponents is the subject of "Luis Melendez: Master of the Spanish Still Life," now at LACMA. (Top, Melendez's Bream, Oranges, Garlic, Condiments, and Kitchen Utensils). Though just two rooms, it's possibly the best Old Master show the museum has ever done (it or the 2005 van Ruisdael show). There's only thing wrong with the show, and that's the walls. They're painted and textured in a simulation of whitewashed rough plaster or stucco. Yes, like something you'd see demonstrated on HGTV.
Ironically Melendez never painted a white wall so far as you prove from the paintings on view. The subjects are set against the blackest of black murk or, in a few cases, storm-tossed romantic landscapes. The stormy skies are worth noting. The black-background still lifes often evoke a weird beam of sunlight during a late-afternoon summer thunderstorm.
Compositionally, the black background has the effect of focusing attention on the subject. It's like the white cube once favored for showing modern art. Like that white cube, the black backdrop is anything but neutral. Affectively, it's melancholy and mysterious, all about a certain slant of light that oppresses. One of the questions the show poses is why such a simple trick has the psychological punch it does — and whether we get the same thing out of it as Melendez and his patrons did. The supernatural lighting must have had theological significance, if not so much for Melendez, then for his predecessors of the previous century. To us today, Melendez (and Sanchez Cotan, Zurburan, Peale...) is likely to evoke words like luminism, surrealism, magic-realism, film noir — none of which meant anything to these artists. What did these paintings mean, then? 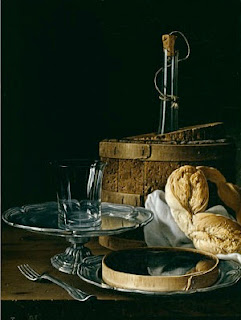 The morbid quality we attach to black may not always have been intended. Box of Jellied Fruit, Bread, Silver Salver, Glass, and Wine Cooler (right) displays an upscale summer dessert and was paired with a winter spread — less Morticia Addams than Martha Stewart. Still, black as an emblem of mortality is pretty universal, at least in the West. Consider the popular Oaxacan Day of the Dead effigy of a skeleton painting a wall black. He dips his brush into a paint can labeled NUESTRO FUTURO.

UPDATE: LACMA's Unframed blog reports that the faux detailing of the Melendez walls "may be repeated in the medieval galleries when the European art reinstallation is complete next year."
Email Post
Labels: Emily Dickinson LACMA Luis Melendez Raphaelle Peale

Donald Frazell said…
White and blue are also colors of death, just depends on where you are. And since such a feeling is far from universal, it must be discounted as parochial and quaint. And as you suggested, quite possibly not at all intended.

Also, the emotional has always been THE point of creative art. As Cezanne said, it is the beginning and the end, technique but the path of developing a rich swath of passion into a matieral thing that triggers it in others. All true creative artsits know this, and why we are the enemy of academic thinking and art.

Which is about things and profit, about career and controlling the universe. A false dream if ever there was one. Demonstrated by our most recent economic calamity, far from being the last one, as greed and fear control both capitalism and academic lifestyle. They are irrevocably linked.

art collegia delenda est
art colleges must be destroyed
They deceive and tangent those who are curious away from truth.
October 16, 2009 at 6:50 PM