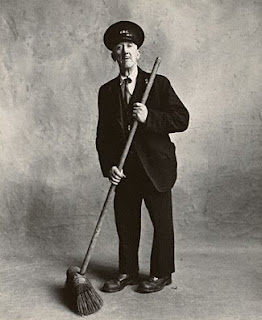 "This place has more failed artists and intellectuals than the Third Reich." Don Draper was speaking of Sterling-Cooper, but his words could just as well apply to another cauldron of mid-century modern angst, Conde Nast. Art director Alexander Lieberman set the tone for Vogue magazine while moonlighting as a sculptor, producing some of the most brain-dead abstractions ever to be collected dutifully by American museums. (Lieberman is responsible for the "red ziti" on the southeast corner of LACMA's campus.) One of Lieberman's proteges was Irving Penn, a failed painter who scraped the pigment from his canvases and repurposed them as photographic backdrops. Penn turned out to have a genius for fashion photography. He was never entirely content with being a successful commercial photographer, though. Throughout his career, he did "personal projects." The most notable, his "Small Trades," is now on view at the Getty Museum.
Inspired by similar efforts of Atget and Sanders, Penn set out to portray ordinary working people of Paris, London, and New York. In this he was aided and abetted by Lieberman. Some of the results appeared in various editions of Vogue in the early 1950s. Penn's main innovation was to bring his subjects into the studio, in their work clothes, and photograph them against neutral backdrops in natural light. 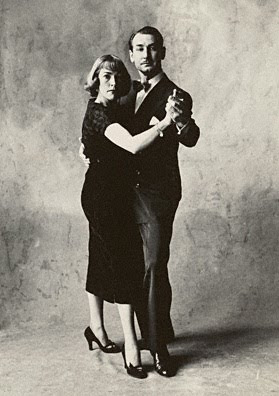 He awaited the preternatural perfect moment; even his Ballroom Dance Instructors (right) is cleverly stiff, a Laguna Beach-worthy tableaux vivant in which dancer is forever estranged from the dance. Penn kept up the project as time permitted, reprinting negatives over the next decades. The 92-year-old artist died Oct. 7, a month after the Getty show opened. Reading the numerous eulogies, Charlie Finch "asked myself why the work of this universally celebrated master always left me cold and came to the conclusion that it was because of fashion." Finch posed a question not everyone in the art world was willing to ask: "Is fashion photography art?" That's a take on the question still asked outside the art crowd, omitting the word "fashion."
Irving Penn suavely photographed the world's most beautiful models in the most stunning clothes. He did commissioned portraits of society folks and celebrities. Given that hard-to-ignore context, Penn's photos of unbeautiful working stiffs are liable to come off as patronizing. It's not that Penn was ridiculing regular people. It's worse that that: he was patting them on the head and saying, good for you! (I went through the show asking myself, "Why do I think this is slumming when I love Diane Arbus — and don't have any problem with anything she did?" Answer: Haven't a clue.)
In his 1974 publication Worlds in a Small Room, Penn explained,

"In general the Parisians doubted that we were doing exactly what we said we were doing. They felt there was something fishy going on, but they came to the studio more or less as directed—for the fee involved. But the Londoners were quite different from the French. It seemed to them the most logical thing in the world to be recorded in their work clothes. They arrived at the studio, always on time, and presented themselves to the camera with a seriousness and pride that was quite endearing.
"Of the three, the Americans as a group were the least predictable. In spite of our caution, a few arrived for their sittings having shed their work clothes, shaved, even wearing dark Sunday suits, sure this was their first step on the way to Hollywood."

They made it to Brentwood, anyway. Penn set aside a definitive set of 252 prints that he entrusted to the Getty last year, as a sale and gift. Every single print is on view in this show, maybe the Getty's largest show ever — of anything.
Email Post
Labels: Alexander Lieberman Charlie Finch Getty Museum Irving Penn Mad Men

Donald Frazell said…
Uh, wrong. My mother went to this school, and was a freshman when Penn was a senior. It was an applied arts school, not a fine arts school til much later. Penn was originaly an assistant editor at Vogue, as his graphic arts background taught him to be. He had issues with the photographers they had, and was given an assignment by the editor to photograph a shoot. His almost immediately became the style of Vogue, and may have made the magazine what it is today, Though that is not a good thing anymore, but was back then.

His work is direct, not artsy fartsy nonsense, one can pose, but it will be seen as the artifice it is. No frontin and pretending, as the current fashion, er, art world sees themselvse in their artificual world they mistake for reality and truth. His work is direct, as much influenced by Paul Strand and the post Hollywood Edward Weston as those you list. many thought Hemingway strange and using also, but thats the way of creative artists. The photograph of the best Ameican artist of them all, Miles Davis is a classic. All true artists who wanted direct un adorned truth came to him.

As originally a photographer myself, more in the Bret Weston mold, I find his work quite refreshing. I found that photography had its limitations and run its course, the crap of today fitting quite nicely in with contempt painting and conceptual self absorbtion. Unlike Arbus who was a user of freaks to get her own name known, though truly she was one of them herself. Penns are balanced, intelligent and curious about the world, not ones own limited domain. He explored the world around him, the single strength of photography, and through one must go to reach for god, the spiritual, and define mankind, which he did. He fulfilled craetive arts three essentials without even knowing it, but followed what he felt. Defining mankind, exploring anture and searching for god being the purpose of all creative arts. Not the fine arts of kissing up to the rich, and feeding their egos.

I have often seen his work and will certainly get to this show. Yes, it makes one feel uneasy, especially if you have much to be uneasy about. Its not voyeurism like your Arbus, but simple presentation of who one is, in the most direct and simple way possible. Done with great craft, and evocting those emotions that are at the core of creative art, and you dont like.

Fine Art was always crap and annexed creative art, claiming to be one and the same, though nothing is more fashion than fine art. Penn's photographs are eternal, about more, about us, not I. Yes, he fell into it, did not study for it at all, but then, thats truly life. Its what one does with the opportunties that come acros ones path, and being prepared.

Not buying MFAs and expecting to be lauded and glorified as an artiste. Art has been sterilized, merchanidzed, ego driven. This is its opposite, as entertainment and creative art are yin and yang, both necessary but should never overlap. Entertainment and therapy has bought creative art, thinking it can be its, but never has been, never will be. Those days are over, the cult of the individual, leading to our current economic disaster, brought on by the very patrons of the arts who buy the contempt schlock.

Time go grow up, time to put aside childish things. And be men, Time, to get to work.

Donald Frazell said…
Here, a grinning Duchamp rather feyly covers himself, fitting his lithe sexy body into the wedge as if it were a cocoon. His expression indicates that "this too shall pass," as, hopefully, will the art world's insistence on welcoming the thin world of fashion into its precincts.

What a flake this charlie finch is. Who cares what the fool thinks, lithe sexy body? Make me puke! Hero worshipping of the most perverted kind. If a real man said he loved the way Frida Kahlos bosum made her work so much more passionate, he would be derided forever. Sorry, cant think of single decent looking female fine artist, all anorexic and self absorbed, frida is the best I can do. And the men, including Duchamp are just as bad. Just alot more of them.


what a douche. And proves my above point completely. What happened to virile, healthy femininty and masculinity? Gone, all metrosexual Portraits of Dorian Gray

Anonymous said…
Frazell: "As originally a photographer myself, more in the Bret Weston mold..."

Donald Frazell said…
Actually, better. We were making them at the same time, in the late 70s, I took it as far as it could go. And found myself back at Cezanne, so started painting, which again is far beyond your small minded illustrations of retarded academic ideas. That aint art. Its therapy. And lord knows the contempt world needs alot of that.