Beauty and the Geek

LACMA has debuted its new Oceanic collection in "Art of the Pacific," a longish-term temporary installation designed by Franz West. Like Jorge Pardo's ancient America rooms, the West design is pointedly different from what you'd expect. The curvacious Easter Island dance paddle (left) levitates on a geeky pedestal that dares you to hate it because it's unbeautiful. West's profusion of two-by-fours perversely evokes Eero Saarinen's dictum, "The undercarriage of chairs and tables in a typical interior makes an ugly, confusing, unrestful world. I wanted to clear up the slum of legs." Another point of reference for West seems to be Brancusi, with his use of pedestals that compete with what they're supporting, creating a sense of tension. (At that, the dance paddle's face is pure early Brancusi.)
The pedestals often work best when you least expect it. A sleek neckrest from Tonga, c. 1850, has four minimal legs that would have delighted Saarinen. It ought to clash with the forest of two-by-fours beneath; somehow it gains power and complexity from them. It's an interesting visual puzzle. 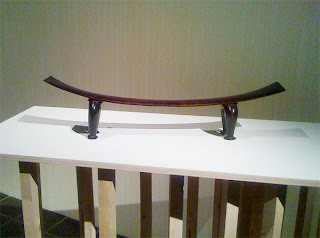 Love the pedestals or hate them, it's a safe bet you won't spend too much time looking at them. The so-called Masco Collection, mostly assembled by kitchen cabinet magnate Richard Manoogian, lives up to the advance billing. This is a Frick collection of Pacific Islands art. That's all the more welcome at LACMA, a museum where the masterpieces tend to get plenty of breathing space. Here, you'll be waiting to exhale.
Most objects are beautiful, rare, old (pre-1900), in an extraordinary state of preservation, or all of the above. Smiley-faced New Guinea skull racks are popular with museums, but the LACMA rack is shown as its makers intended, as an Eames Hang-It-All for organizing the skulls of vanquished enemies. Though it's shown behind glazing, most of the larger pieces are free-standing and lighted by sideways daylight. As usual in Pacific collections, Melanesia is best represented. The collection has no Marquesan tiki figure (remedied here by a loan), and there's only one piece representing Micronesia, a jaunty house mask from Satawan Atoll. 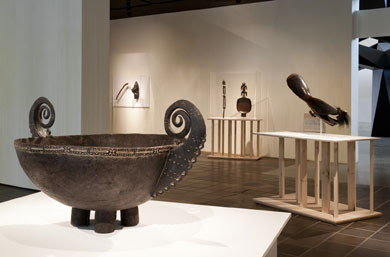 The "Art of the Pacific" installation has no object labels, evidently on the theory that "the objects speak for themselves." Well, sure. Ideally. It's hard to imagine any museum displaying the comparable caliber of Western art without labels. (Other than the Frick, of course.) For now, there are uninformative laminated cards in the gallery and a first-rate handbook to the collection on LACMA's site.
LACMA is becoming the Museum of Novel Wall Treatments. The walls here were painted in green tea by West's Viennese compatriot, Andreas Reiter Raabe. The streaky texture is just noticeable enough to say this isn't a white cube, and neither is it anything else that it's not. It's too bad they didn't get Raabe to do the walls in the Melendez show. (Want a tea-dappled guest room? LACMA's "Unframed" blog appears to divulge the secret ingredient.) 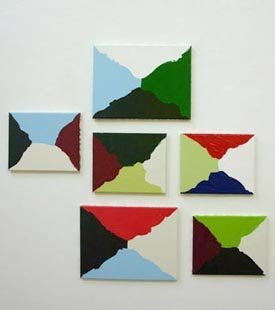