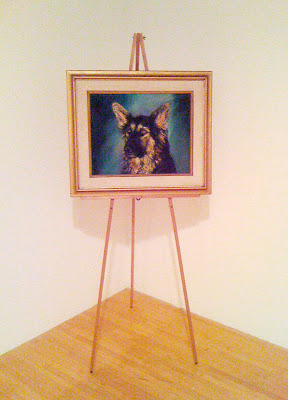 In case you haven't heard, both MOCA buildings are presenting the largest installation of the permanent collection ever, 500 pieces by 200 artists (above, William Leavitt's 1972 Painted Image). The collection now spans 70 years, with a small Mondrian from 1939 being the first major milestone. Pre-1980 art fills the Grand Avenue building, and more recent works are in Little Tokyo. There's an exemplary website. 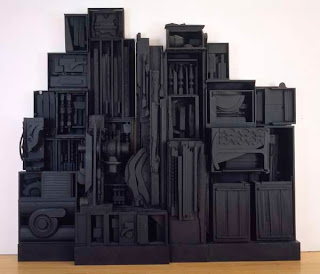 • What MOCA is showing: Well, the usual suspects plus tons of near-great stuff that hasn't been shown much or at all. At California Plaza, it starts with two Ad Reinhardts in the chronology's first room. There's a monumental Louise Nevelson, Sky Cathedral (1959), a gift from the artist. A mural-scale Alfred Jenson, an entrancingly small Michael Asher… and on and on. The show proves how infrequently 98 percent of the the collection has been exhibited.
• MOCA has never been big on gallery texts. This time, it's using quotes from the artists. Great artists are not always good at talking or writing about their art. Whoever selected the texts here showed real discernment. Instead of echoing present-day conventionalities about the recent past, the quotes veer off into unexpected tangents. Check out Ad Reinhardt on the rules of art, Willem de Kooning on homosexuality, Helen Leavitt on socialism, and Lewis Baltz on Los Angeles and God. You can find all but the Baltz quote on MOCA's site, so here's an excerpt: "I always believed that God would destroy L.A. for its sins. Finally, I realized that He had already destroyed it, and then left it around as a warning."

• Within the chronology, the installation makes use of visual and conceptual rhymes. Nothing new there, but MOCA's interpretation is subtle and smart. The inky-black Nevelson leads into a room of Klines and Siskinds. It creates a marvelous black-and-white epiphany, all the more welcome for artists whose reputations have sagged in recent decades. Elsewhere there are rooms on the all-American themes of cars (Robert Frank and John Chamberlain) and sex (Nan Goldin and Yayoi Kusama).
• What MOCA isn't showing: Two Max Ernst sculptures (left, Lunar Asparagus, 1935). Arshile Gorky (naturally; his big retrospective, now in Philadelphia, comes to MOCA next year). Four other Louise Nevelson sculptures. Ansel Adams (doesn't feel very MOCA, yet the museum has 72 prints, donated early in its history. Have they ever been shown?) Brassai (94 prints). A crazy, early, cowboy-'n-Indian Roy Lichtenstein, the sort of thing that's been getting some attention lately. A fifty-foot-wide Frank Stella, Agua Caliente (below), that hasn't been getting much love from anybody.

• What MOCA doesn't have: Some major Abs Ex'ers, Louise Bourgeois, Eva Hesse… Despite the claims of having a great New York school collection, it boils down to Panza's amazing suites of Rothkos and Klines, plus a quintessential Pollock drip. MOCA has no de Kooning painting. (It's showing Dark Pond, a loan from the Frederick R. Weisman Art Foundation.) Nor does it have paintings by Newman, Still, or Motherwell. (The Huntington has a Motherwell!) Beyond that, there are plenty of first- and second-generation abstract expressionists MOCA ought to have: Gottlieb, Baziotes, Pousette-Dart, Lewis, Frankenthaler, Guston, Mitchell… The good news is that most of these artists are not obscenely expensive. The bad news is that any collector must think twice before donating a Norman Lewis, given how how infrequently the Jackson Pollocks have been shown. 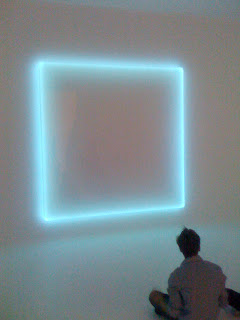 • Popular favorite: Very possibly, Doug Wheeler's RM 669. Visitors of all ages were zoned out in front of it, like it was a flatscreen TV with all the good channels. It's every bit as worthy of adulation as Family Guy.
• "First Thirty Years" ought to be on permanent display. Ironically, for the time being, it is. MOCA's belt-tightening has cut back the kind of temporary shows the museum was known for. One building is better than two, and a building able to show the permanent collection alongside temporary shows is better than one that requires trade-offs. Given MOCA's financial realities, this is the most unconstructive of criticisms. 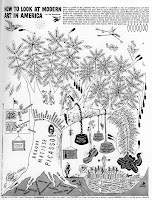 • A historical show like this raises the question of where contemporary art has been and where it's going. Click on the image at left for one skeptical answer, courtesy of Ad Reinhardt. It's a cartoon family tree of contemporary art he did for ARTnews in 1961, midway in the time frame of the works exhibited at California Plaza. The sobering thing is how few of the names of Reinhardt's avant-garde contemporaries mean anything to us today.
Email Post
Labels: Ad Reinhardt Doug Wheeler Eva Hesse Frank Stella Jackson Pollock Louise Bourgeois Louise Nevelson Max Ernst MOCA Norman Lewis Roy Lichtenstein William Leavitt