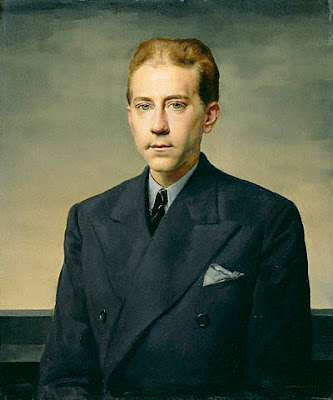 As if in response to MOCA's "First Thirty Years," the Getty is showing all its 20th-century paintings — both of them. That would be Ed Ruscha's 1997 Picture Without Words (left, on permanent view in the Getty Center auditorium) 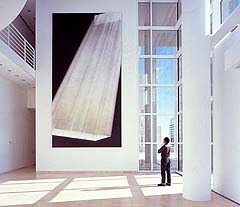 and the rarely seen 1938 portrait of museum founder J. Paul Getty by British artist Gerald Brockhurst (above). The Brockhurst presently serves as the frontispiece to the Malibu Villa exhibition "Collector's Choice: J. Paul Getty and his Antiquities." Needless to say, the show isn't about Brockhurst, and the label half-apologetically ID's the painting as a society portrait. As that demonstrates, museums have a fraught relationship with founder portraits by non-canonical artists.
Armand Hammer broke his promise to give his collection to LACMA in part because the museum balked at displaying banal portraits of Hammer and wife in the galleries, next to the Rembrandts and Van Goghs. 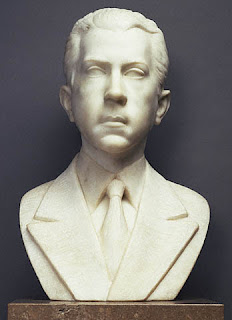 No such drama attended J. Paul Getty's gift of two portraits to his eponymous museum. The best-known is the marble bust that sits in the entrance of the Getty Center museum — not greeting visitors so much as casting Haunted Mansion eyes on them as they leave. It's normally the only work of art there aside from the Giacometti Standing Woman. An odder couple is hard to imagine. The 1939 bust envisions Getty as a Mussolini-era Roman, wide lapels in lieu of toga. Its author is Pier Vangelli, whose reputation is best gauged by typing his name into Google. The search engine will try its darndest to convince you that you must have misspelled the name of actress Pier Angeli. She dated James Dean. The highest-ranked relevant link for is the Getty's own website. The Getty biography of the artist is completely blank. 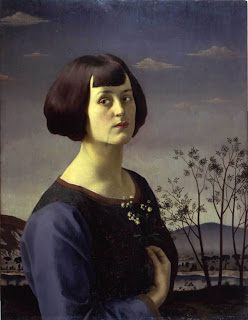 In comparison to Vangelli, Gerald Brockhurst (1890-1978) is a rock star. By the age of 12, the Birmingham-born tweener was hailed "a young Botticelli." That was in 1902, when no one knew what would become of young upstarts Matisse, Malevich, and Picasso. In 1914 Brockhurst painted Ranunculus (right), a portrait consciously evoking the quattrocento tradition of figures against a spare landscape and sky.
Brockhurst fell deeply under the spell of Piero della Francesca, and he wasn't alone. Twentieth-century critics, art historians, and artists had rediscovered Piero. He was "modern." By the 1930s, art had become less radical across the board. Even Picasso was vacillating between classicism and surrealism. This inflected views of art history and what it might mean for the present. Piero was perceived anew as a magic realist. His work finds echoes in Otto Dix, Grant Wood, Balthus — and Brockhurst.
Gerald Brockhurst painted such notables as Marlene Dietrich and the Duchess of Windsor. He said he sought to record appearance, not character. That contrarian talking point has much in common with the German New Objectivity. It's not quite true, of course, in either case. Though better-mannered that a Dix or Wood, Brockhurst's Getty has more than a hint of caricature. The diagonal lines at the corners of Getty's mouth are straight out of a cartoonist's manual. Mona Lisa smile or Cheshire Cat smirk — or is the young billionaire pouting? Brockhurst omits the quattrocento trees and landscape in favor of a minimalist parapet. As in some Magrittes, the murky sky is painted more intriguingly than the oddity that's blocking it.
Getty must have been pleased. He certainly respected Brockhurst's counsel. The artist gave Getty a hot tip on the art market. The Madonna of Loretto, a painting coming up for auction at Sotheby's in July 1938, was an authentic Raphael, Brockhurst insisted, not a mere copy. The foreshortening of the Virgin's arm proved it was the real McCoy. On that advice, Getty bought the painting for less than $200. Thanks, Gerald. It wasn't a Raphael, not in the current understanding. But Getty became obsessed by it. He spent endless hours trying to prove to the art world that it was authentic. He largely succeeded until a superior version turned up in France. Brockhurst's bum tip seems to have reinforced Getty's innate conviction that the great thing was to buy junk on the cheap and convince everyone else it was a neglected masterpiece. Getty was remarkably uninspired by the idea that he, as the world's richest man, could afford to pay market prices for the world's greatest art. 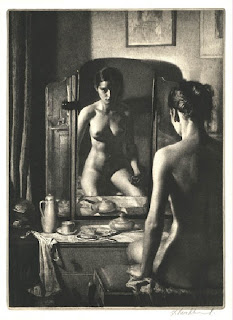 Brockhurst often feels close to Balthus — the Paris-born Swiss artist whose status as a back-bench modernist is as secure as Brockhurst's is not. Both incorporated Piero's stiffness and numinousness into paintings that were at a polar remove from the mainline moderns. Both earned livings painting "society portraits." Both had personal and artistic interests in very young women. Brockhurst's most famous work today is a near-photographic 1932 etching, Adolescence (right). That's a year before Balthus' ruder, cruder painting of Alice in the Mirror, now at the Centre Georges Pompidou. In Britain, it was a positive scandal to show a picture of a 16-year-old nude, no matter that the private parts were in deepest shadow (unlike the Balthus). The furor over Brockhurst's 15-inch-high etching(!) is said to have necessitated his move to America.
Accurate or not, he moved six years later, the year after he painted Getty. Brockhurst and second wife (the nymphette model for Adolescence), made New York landfall months just after Mondrian and Matta did. He couldn't have anticipated that provincial America was about to go modern in a big way. Brockhurst died in Franklin Lakes, New Jersey, in 1978, his days of celebrity long over. Wikipedia adds this qualification: "In 1958, he appeared as a guest challenger on the TV panel show 'To Tell The Truth'."
Email Post
Labels: Balthus Botticelli Ed Ruscha Gerald Brockhurst Getty Villa J. Paul Getty Pier Vangelli Piero della Francesca Raphael