The Getty Research Institute has acquired two wooden models of Philip Johnson's unbuilt "Habitable Sculpture," originally intended as a 26-story residential tower for lower Manhattan. In 2001 the 95-year-old Johnson called the tower "the best building I ever designed.” It was to have been cantilevered over the Federalist James Brown house (1817), setting off a battle with preservationists and starchitecture NIMBY's. The GRI acquisition includes a video interview with Johnson and a set of posters produced as part of a campaign to promote the building. The posters implore "Say Yes," but NYC said no. "What was lost here was not just a project," developer Antonio Vendome said in 2002. "It gives absolute direction to any investor or developer: 'Keep your eye on the bottom line.' Imagination, passion and beauty have nothing to do with it." 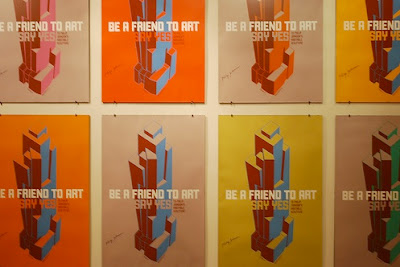