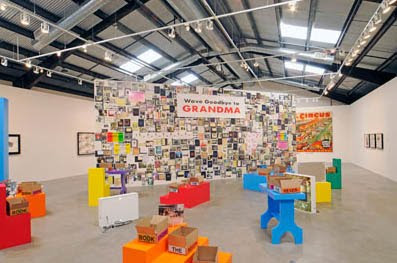 Color lithography is having a moment. At the Santa Monica Museum of Art, Allen Ruppersberg has assembled a museum of found images, spanning early 20th-century sheet music and c. Summer-of-Love rock posters. It's all anchored by two mural-size circus posters. Are vintage chromolithographs art? Nobody asks that question, not when they're part of a contemporary artist's installation.
Across town is the Huntington's "The Color Explosion: Nineteenth-Century American Lithography from the Jay T. Last Collection." Last, otherwise known as a founding father of Silicon Valley and collector of African art, has promised his 135,000-piece archive of American color lithography to the Huntington. In the museum world "ephemera" describes printed images created for a commercial purpose and not intended to last for the ages. In fact these things have long been collected. Examples on view include theatrical posters, tobacco and cigar box labels, trade cards, seed packets, orange crate labels, children's books, board games, city views, calendars, and much more. It's all fascinating as a demonstration of how much American life has changed, and how much it's stayed the same.

The remarkable thing is how few of the images impress contemporary eyes as art. That's puzzling because the art audience has been conditioned to accept just about any early photograph as art. Police mug shots? Check. Botanical specimens? Check. Documentation of surgeries and anesthesia? It's all good.
Color lithography and photography each burst on the scene around 1840. As in a romantic comedy, they were rivals who completed each other. Photography offered detail without the toil and distortion of the artist's hand. Lithography supplied the color early photography couldn't. With diligence, it too could verge on photographic exactitude.
Cases were made, early on, for photography and lithography as fine art. Advantage, lithography. Goya was an early adopter, albeit in black-and-white. Both media offered artists scope to invent new types of pictures, even as the underlying technologies were being refined and reinvented. Both went through cycles of critical acceptance and rejection. In the twentieth century, the art trade invented editioned lithographs as a form of affordable art by famous painters. For much of that century, photography was ephemera, the province of crazy collectors who couldn't afford real art — not even lithographs.
A couple of decades upended that opinion. Snapshots went up on art museum walls as "vernacular photography." Color lithography began to feel less of the moment — even Picassos, much less baseball cards. 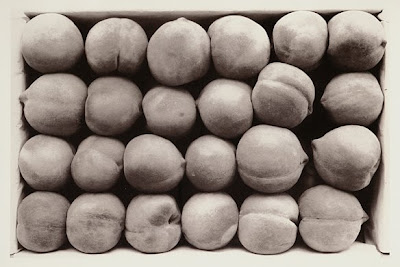 Consider Carleton Watkins. He's now called the first great American artist in the West, or the greatest American artist of his age. This reflects a very recent upgrade. John Coplans rediscovered Watkins in the 1960s, and only in the 2000s has Watkins rated superlatives. Above is Late George Cling Peaches, c. 1888, owned by the Huntington and until recently filed under documentation of the Old West. Now, everyone in the art world's got a hard-on for this sort of thing. It's pop, it's minimalism, it's postminimalism.
It's also an advertisement for peaches. It must have been created for purposes not too disimilar from the produce labels, posters, and trade cards in the Huntington's lithograph show. Why is there no color-litho equivalent to Watkins? (The two household-name lithographers are businesses, not individual artists: Currier and Ives and Milton Bradley.)
One answer might be text. The lithography medium makes it easy to incorporate text into the image. In fact the typography is one of the most innovative things about these pictures. But it means the images are forever married to sales pitches for defunct precursors of Lady Gaga, Rogaine, and Grand Theft Auto. A photograph, such as Watkins' peaches, exists independently from any sales pitches that might once have been appended. It leaves future generations a blanker slate on which to project.
Another theory: Clients must have kept lithographers on a short tether, demanding beatific expressions, unsubtle humor, and artistic conventions fondly remembered. Those clients may have been less hands-on with photographers. They weren't buying art, they were buying photography = truth. The best artists, like Watkins, realized how much slack that gave them.
Email Post
Labels: Allen Ruppersberg Carleton Watkins Huntington Library Jay T. Last lithography Santa Monica Monica Museum of Art

Donald Frazell said…
Purpose is everything, at least when done so well that it accomplishes ones desire, and triggers these emotions in others.

There are many forms of art. These lithos are applied arts, advertising. Thats their purpose, and none other can be found, though contempt types can find the most absurdly shallow meanings in dog poop, or cow splats. Ask my boy William Wray, an excellent cartoonist and illustrator, who also does creative art now, but knows the difference,. Art schools dont, as if they all get blended together, it is so much easier to sell degrees.

The photos are informative, but also this one lookng for order and patterns in the combination of nature and man, seeking god within it. On a minor level, but actually successful, and so creative art. Not fine art, which thinks it is creative, when truly only about mollifying their clients wants, the rich and self absorbed. Fine art refines things into nothingness so nothing disturbs the owner, but gives a sense of superiority and power of objects, to seemingly control life. Now thats truly an absurd "concept" and why contemporary artistes can never be trusted to qualify anything,. What have they ever done? Nothing, and thats what sells. Therapy, absurdist humor, childish self expression, and decorations.

But true creative art exists, when one seeks it. Finding order in chaos. meaning. Purpose. The enemies of contemporary art, of this Salon, just as that of the nineteenth century. And it is going down,. The age of excess is over.

But this above is some truly childish nonsense, all about the maker and viewers childhood, Grow up damnit, it is time to put aside childish things, we got work to do.
Time for Men and Women, in creative art, we are needed.