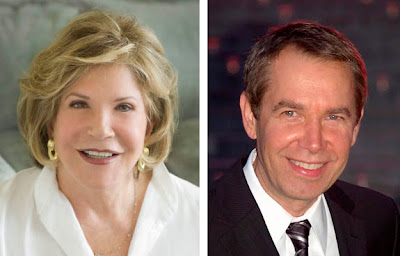 Has Wallis Annenberg unfriended Jeff Koons? Easily missed in the spate of recent articles about the plight of Koons' Train is this jaw-dropper from Annenberg (in the October Vanity Fair profile by Bob Colacello): "I personally think Los Angeles deserves a much finer icon than a train hanging from a crane."
Ouch. To put that in context: It was Annenberg who put up the $2 million for Train's feasibility study. By definition a feasibility study may determine that a project is impractical. So Annenberg was once so stoked on Train that she was willing to venture $2 million on the mere possibility of determining that it could be realized. The results of that study — or even whether it's been completed — have not been made public. But Koons is talking like fabrication can start the moment anyone writes a check.
The mystery is why Annenberg soured on the project. The Koons piece was "a train hanging from a crane" when announced in February 2007 — and that's still exactly what it is.
Email Post
Labels: Jeff Koons LACMA Wallis Annenberg

Donald Frazell said…
maybe she grew up. or finally understood, that the age of excess is over. And it would be unseemly. cant have that now, can we dear?
art collegia delenda est
December 14, 2009 at 12:20 PM

Ezrha Jean Black said…
$2 million is a far cry from the $35 million or so it would take to execute and install (to say nothing of maintenance). It's a little intimidating for a museum entrance & probably even hazardous in seismically active L.A., & almost ludicrously ugly. WA's underwriting of the feasibility study was of a piece with her underwriting of many other gifts and programs to LACMA -- including Engineer (train or building -- who can tell?) Michael Govan's salary -- who no doubt talked her into it. Give her credit for having enough sense to recognize that Govan, et al. should focus on getting the LACMA 'train' -- its programs and collections -- back 'on-track' rather than continuing to pour money into the art world bubble that is Jeff Koons.
December 30, 2009 at 1:31 AM

Anonymous said…
couldn't we just take that $2 million to repair the situation with the Department of Cultural Affairs?
February 1, 2010 at 7:33 PM