“Effulgence” at the Velaslavasay Panorama 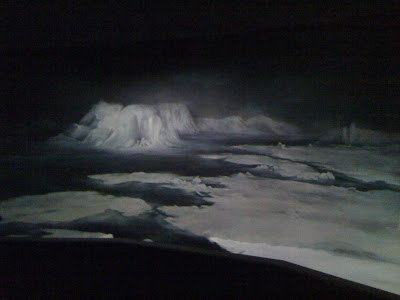 The Velaslavasay Panorama tends to be mentioned in the same breath as the Museum of Jurassic Technology. It is a deadpan recreation of another age's public spectacle, done on the slimmest of budgets by a clever artist working outside the MFA box (in this case, Sara Velas). The Velaslavasay presents panoramas, which is to say cylindrical landscape paintings where the viewer stands in the middle.
The idea is credited to otherwise forgotten Irish artist Robert Barker (1739-1806). During a walk with his daughter on Calton Hill, Edinburgh, Barker was struck with the notion of capturing the full, 360-degree view and presenting it to the viewer in a special room. Barker talked up the idea to Sir Joshua Reynolds, who told him to forget it. Barker nonetheless took out a patent in 1787, sparking a century-long vogue for illusionistic cylindrical landscape paintings. From the beginning, the goal was virtual reality. These were paintings without frames; the viewer was to feel that he or she was there. Panoramas were the Avatar of their time, proof that the masses desire nothing more than dimensionally "realistic" illusion. Panoramas predated photographs and gave stereographs a run for the money. It was motion pictures that killed them. To the British, particularly, panoramas offered a substitute for foreign (ugh!) travel. The Times of London found a 1861 panorama of Naples “even more pleasant to look upon in Leicester Square, than is the reality with all its abominations of tyranny, licentiousness, poverty and dirt.”
Barker originally named his invention “la nature à coup d’oeil” [“nature at a glance”]. On the advice of friends, he switched to “panorama,” a word that remains in the language, though (oddly) it is most often used to describe a real unrestricted view rather than the illusion. The L.A. suburb of Panorama City is proof of the term's popularity and bastardization. Velaslavasky's auteur, Sara Vela, was born there.
There are no proper panoramas in Panorama City, and only three others in the U.S. (in New York, Gettysburg, and Atlanta). The Velaslavasky inhabits the former Union Theater in the West Adams district. As in the panoramas of old, the viewer ascends a spiral staircase to enter a circular viewing platform looking out on an expansive landscape. The landscape is a painting, carefully lighted and supplemented by some three-dimensional elements between the platform and the backdrop. The Velaslavasay space is much smaller than its nineteenth-century forebears. The painting is maybe five feet beyond the edge of the platform. This diminishes the sense of "being there," but that's okay. It is the artifice that resonates most loudly.
The current offering, "Effulgence of the North: An Arctic Panorama" is a near-monochrome view of ice floes. The sepulcral lighting and ambient noise of "Effulgence" change ever so slowly, on a long-cycling timer. It's an interesting gloss on the the hallucinatory literature and art of the polar regions, initiated by Samuel Coleridge's "The Rime of the Ancient Mariner" (1789); the icebound landscapes of Caspar David Friedrich, Frederic Church, and William Bradford; Gustave Doré's 1876 illustrations of "Rime"; the "slow time" of L.A. light and space art; and the Ganzfeld effect, a point of reference to the latter movement, in which jet pilots and snowblind explorers see phantasmagoric imagery in a featureless field of vision.
The panorama's brushwork is not so fundamentally different from what you might find at the Laguna Pageant of the Masters, executed on a tight production schedule. But the Velaslavasay presentation encourages the viewer to find abstraction in figuration, and strange patterns in abstraction. That way madness — at any rate, sensory deprivation hallucinations — lie.
The blurring of illusion and reality has always been part of the panoramic package. In “The City of York with the Cathedral on Fire,” exhibited at the British Diorama in London, viewers gazed on a painting of York Minister. A light appeared in a window, representing the mad arsonist Jonathan Martin. Smoke appeared, then open flame, which gradually engulfed the building.
On May 27, 1829, a worker was lighting some chemicals behind the panorama painting to give a realistic ruddy glow to the painted flames the audience saw. The trickery set the painting ablaze. The audience became engulfed in real flames as it rushed headlong for the exits. 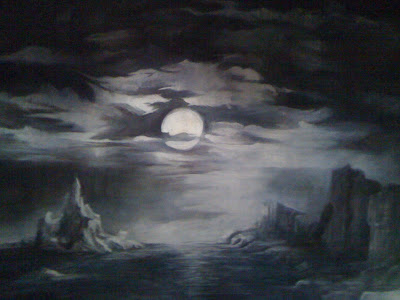