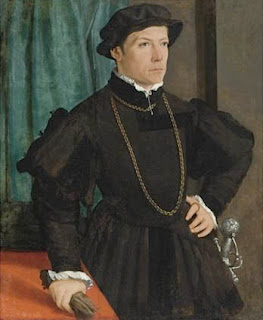 On Jan. 28, Sothebys will auction 17 European paintings and a terracotta sculpture from LACMA's collection, the proceeds to fund new acquisitions. The most valuable work is Christoph Amberger's Portrait of Hans Jakob Fugger (left), estimated at $200,000 to $300,000. Other lots are by Ferdinand Bol, Adriaen van Ostade, Jan Asselijn, and Jan van Goyen (two, both from the Anita Baldwin collection). While nothing qualifies as exciting, they're not all from the storeroom: The Amberger, along with half a dozen others, were on regular view in the European galleries before they closed for renovation last year. LACMA sold another group of Old Masters through Sothebys last June. According to the New York Times, the museum needs funds to gain full title to two Edward and Hannah Carter collection paintings, the celebrated Hendrick Avercamp Winter Scene and a Jan van der Heyden cityscape. Hannah Carter gave the museum 12 of her best Dutch paintings, and the remainder of the Carters' collection was long described as a promised gift. The New York Times now says the Avercamp and van der Heyden were partial gifts to the museum, requiring it to buy the remaining interest. It seems unlikely that the works being sold are worth as much as, say, 50 percent of the Carters' pristine Avercamp. 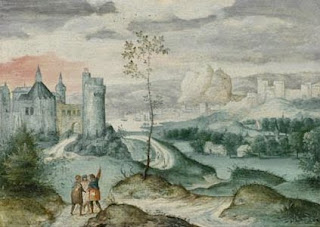 Ironically, one of the pieces to be auctioned is a Carter painting, if an outlier. It's a wan, sketchy Netherlandish landscape (right, about 1535), a forerunner of the 17th-century landscapes the Carters are otherwise known for collecting. The Carters donated it in 1972, before they hit their stride as discerning acquisitors. Ascribed to Herri Met de Bles, it's newly attributed to the anonymous Master of the Lille Sermon and estimated at $40,000 to $60,000.
Email Post
Labels: Christoph Amberger Edward Carter Hannah Carter LACMA

Aztek Robot said…
i just found your smart and funny blog. you are superdope in an academic and institutional way.
January 8, 2010 at 11:43 AM