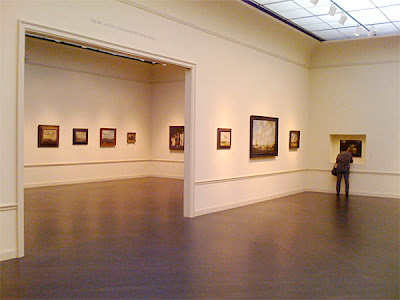 The Los Angeles County Museum of Art is debuting its reinstalled European galleries with five rooms of Dutch, Flemish, and French 17th-century painting. For the first time the Edward and Hannah Carter collection of Dutch paintings has a worthy presentation. That alone makes LACMA a better, more important museum than it's ever been. All 36 Carter Dutch paintings have now been accessioned, including the Hendrik Avercamp and Jan van der Heyden that were partial gifts. (This pair reportedly motivated this past week's auction of unwanted works from LACMA's collection.) The museum now has three large rooms of Dutch golden age painting. Two of the three are devoted exclusively to Carter works.
The kneejerk reaction is, doesn't that set a bad precedent? LACMA has a history of donors bolting after not getting their own museum-within-a-museum — or getting it, for that matter. There's been no indication that the Carters, by all accounts the museum's most unselfish supporters, demanded a room (or two) of their own — or else.
Remarkably, the Carter-segregated arrangement is as fine as you could ask for. The Carters bought only landscapes, seascapes, city views, church interiors, and still lifes. Everything they bought was a first-rate museum painting. Within these categories, LACMA has almost nothing worthy of hanging next to the Carters' works. The only painting in the "non-Carter" room that feels like it might belong is the Jan Davidsz de Heem Still Life with Oysters and Grapes, an Ahmanson gift. LACMA just sold several mediocre Dutch landscapes at Sotheby's. They wouldn't have scanned alongside the Carters'. This suggests a model for future collectors: If you really want your paintings to hang together in perpetuity, focus on one tightly-defined area and make sure that every object you buy blows everything else out of the water.
Speaking of landscapes, one wall alternates (uncle) Saloman van Ruysdael and (nephew) Jacob van Ruisdael. Not too many of the world's great museums can match these four paintings.
European painting and sculpture curator J. Patrice Marandel recently told The New York Times he's looking for Flemish paintings. It's not hard to see why. The Flemish baroque room is low-wattage compared to the Dutch collection. Not so long ago, the museum's most notable Flemish painting was a van Dyck Andromeda, said to be one of just two nudes by the artist. The museum has since decided it's not a van Dyck at all, and it's somewhere in storage. The second-most interesting Flemish painting, the Sweerts Plague in an Ancient City, is now shunted to the Italian baroque room. Sweerts painted it in Rome.
A French gallery is built around the great de La Tour Magdalene. In the past, Marandel has spoken of giving greater prominence the Andrew S. Ciechanowiecki collection of 46 oil sketches, acquired in 2000. The Ciechanowiecki pieces tend to be religious or history paintings by minor classicists rather then the later, plein-air landscapes that have set collectors and museums abuzz. The new installation works well enough mainstreaming Ciechanowiecki "sketches" alongside actual "paintings." In many cases, the distinction isn't apparent. 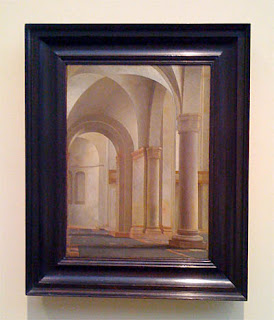 The new rooms are painted off-white and have the ebony-hued wood floors of the modern galleries (the planks at a diagonal to the walls). Whoever picked the paint color probably pitched it as Saenredam white. It's a cool, silvery white that zings with the Saenredam. (Left, Interior of the Mariakerk, Utrecht, a Carter gift.) Stand back and the overall effect is a little severe. It's a white cube with chair rails. Some will find that a relief from the Pottery Barn cranberries and teals many museums are using.
The rooms may not be memorable, but that's not necessarily a bad thing. The Saenredam white cube is a perfect machine for viewing Dutch art. The walls diffuse the overhead light (artificial), offering equal opportunity for every hue of the Dutch palette. The Carter paintings, the Rembrandts, the Magdalene — all look better than you've ever seen them. 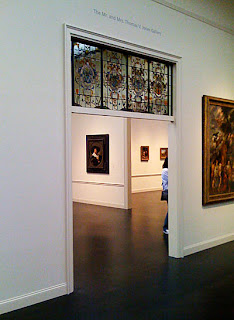 The one flourish in this empire of white is a stained-glass overdoor separating the Flemish and non-Carter Dutch rooms. It's a heraldic Dutch window, dating from the 1620s, a gift of William Randolph Hearst. Hearst gave the museum its modest collection of stained glass, and most of that holding is late in the stained-glass chronology: the 1500s. The even later Dutch window has not been shown in the permanent galleries before. It fits here, reminding visitors that the early Dutch still life paintings coexisted with stained glass. No less important, it provides a landmark in the expanse of white-cubism.
There's more to come. The museum will be showing Italian paintings alongside Roman antiquities in a long gallery, said to be the largest for Italian baroque art in the U.S. More alarming: There's been talk of using the appalling fake-stucco wall treatment of the Luis Melendez show for the permanent galleries. In an unopened room, they're now hanging LACMA paintings on walls reminiscent of Old Madrid. Yikes! 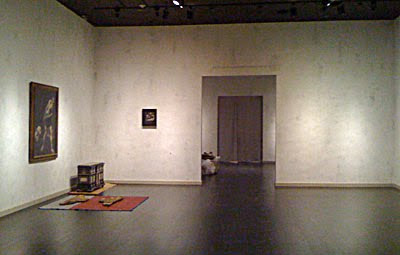 Unknown said…
I just called LACMA and they said that the 17th Century Dutch section is not open yet. The pix indicates otherwise.