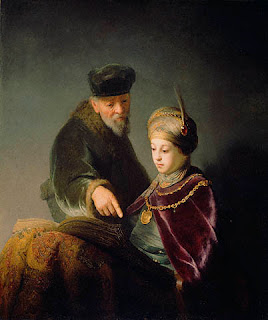 With Rembrandt scholars in town for the big drawing show and a symposium, the Getty Museum has quietly changed the attribution of one of its paintings. Prince Rupert of the Palatinate With His Tutor in Historical Dress, formerly credited to Gerrit Dou, is now called A Young Scholar and His Tutor and labeled "Workshop of Rembrandt van Rijn." Dou was part of Rembrandt's workshop in 1629-30, when the painting was created. But the change isn't just semantics. The Getty's new label copy is less sure the prince is a prince, or this Dou is a Dou. It cites x-ray evidence to argue that Rembrandt sketched in the subject and a student painted over it. The tutor's pointing hand, the focus of the composition, is believed to be by Rembrandt himself. (Hands are notoriously difficult for painters.) As to the student's identity, they're now saying only that "it may be the work of" Dou.
The whole painting was long attributed to Rembrandt. It had been downgraded to Dou by 1984, when the Getty bought it along with an apparent companion piece, Prince Charles Louis and His Tutor, by Jan Lievens. Getty curators have now decided that the faces in the Dou/Rembrandt painting are too generalized to be portraits. A historical subject, such as Eli Instructing Samuel, may have been intended.
This makes yet another case of flip-flopping (de)attributions. Either those 20th-century deattributors went way too far, or today's curators, dealers, and scholars are too hungry for fresh old master meat. Young Scholar hangs in the room where the Getty has temporarily assembled seven Rembrandts. Make that 7.1.
Email Post
Labels: Gerrit Dou Getty Museum Rembrandt