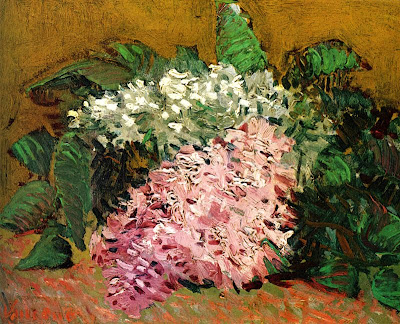 The Philbrook Museum of Art, Tulsa, has been lent six paintings formerly in the collection of L.A.'s Hammer Museum. In 2007 the museum ceded 92 works, said to be worth $55 million, to the Armand Hammer Foundation, resolving a dispute over terms of Armand Hammer's gift. There was no public disclosure of what works were returned or their subsequent whereabouts. The Foundation lent a Morisot and a Caillebotte to the Norton Museum of Art, West Palm Beach. Six others have gone on loan to the Philbrook, according to a November 2009 piece in the Tulsa World. The two highest profile paintings are a van Gogh oil sketch, Lilacs (1887), and a more substantial Renoir from the following year, Antibes (below). The latter is no worse than the landscapes on view in LACMA's current Renoir blockbuster. The other loans are Corot's major, though much-darkened Pleasures of the Evening, William Michael Harnett's Still Life, and works by Bonnard and Fantin-La Tour. 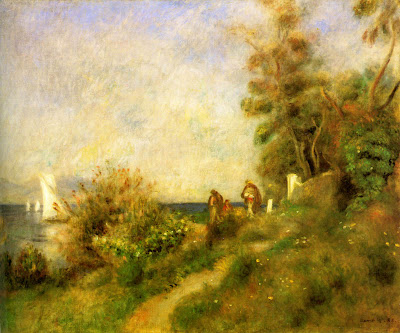 There are no great surprises here. Ex-Getty director John Walsh advised on the split of the Hammer collection, ensuring that the Westwood museum retained the most museum-worthy material. Lilacs is the least interesting of the four van Goghs Hammer owned. Van Gogh's scintillating Hospital at Saint-Rémy, from 1889, is still in L.A.
Obvious question: Why Tulsa? The Philbrook fluffed the Hammer collection way back in 1984. According to the Tulsa World's James D. Watts, Jr., Hammer's grandson, Michael, was married in Tulsa to a Tulsa native, and he sits on the board of trustees of Oral Roberts University. The latter is best known for a brand of Christian conceptualism. In 1977 Oral Roberts had a vision of a 900-foot-tall Jesus telling him his "City of Faith" would be successful. Of comparably monumental scale is the 60-foot Praying Hands, a 1980 bronze by Leonard McMurray, now at the campus entrance. 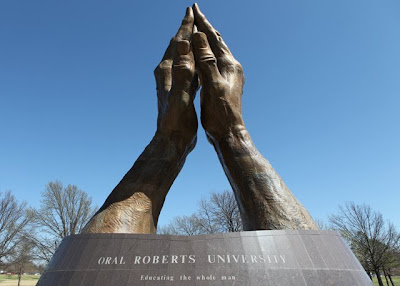