The Eli Problem: One Too Many or Not Enough? 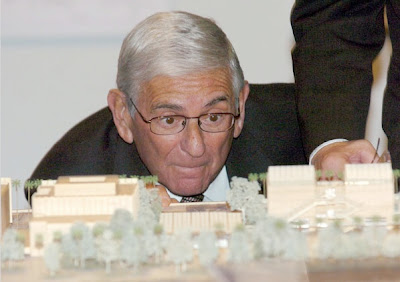 (The New York Times cites unnamed LACMA board members as saying that Eli Broad failed to pay $6 million of a pledged gift, a charge that Broad denied.)

“He owes us a fortune. There was a period he wouldn’t speak to me for a year and a half.” — Lynda Resnick, LACMA trustee

“The problem is that we don’t have enough Elis in Los Angeles to balance out his generosity and the power of his influence.” — Ann Philbin, Hammer Museum director
Email Post
Labels: Ann Philbin Eli Broad LACMA Lynda Resnick

marshall said…
Ann's comment has been made again and again in LA over the past decade, and it's still a correct assessment of LA's philanthropic problems.

Eli isn't the problem. He's a difficult to deal with funder, sure. The fact that he's out there alone magnifies the difficulty of working with him and makes him, a single individual, too relevant to any issue or institution that he attaches himself to.

LA needs 5-10 (or more!) people with Broad's level of interest and resources to take an interest in supporting the city's arts institutions. One of the concerns that a number of people have expressed to me over the years is that Broad's colossal presence may be deterring other "funders of size" from entering the field because they can't compete with Broad's presence.
February 8, 2010 at 10:54 AM

Donald Frazell said…
The problem witht that is, LA is a one trick pony. We have no sizable business at all except real estate and the movie industry. We are far down the list of cities with major corporate headquarters, with all the banks now gone, and aerospace, we dont have much. LA has a narrow range of major individual wealth compared to others, look at who own the Lakers, Clipers, and Staples Center/Kings. Real Estate guys, and so stuck with salesmen,the PT Barnum's and snake oil salesmen of art. Nouveau riche, and tacky. Into mausoleums, not contributing to our human culture.
February 8, 2010 at 4:32 PM