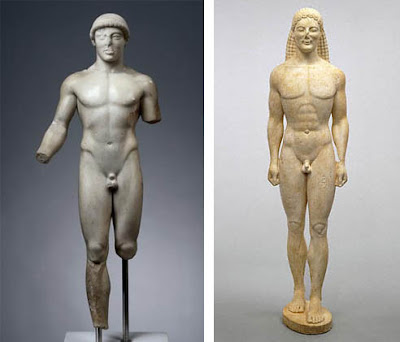 The Getty's recently announced deal with the Sicilian Ministry of Culture and Sicilian Identity provides for transporting the famed Marble Youth of Agrigento (above left) to Malibu for construction of an earthquake-resistant base and public display. The Agrigento Youth, dated about 480 BC, should make a provocative comparison with the Getty Museum's so-called Kouros (above right). The latter, bought for a reported $7 million in 1985, is now labeled "Greek, about 530 B.C., or modern forgery." Practically every classical scholar outside the Getty would say that a more reasonable dating would be "Modern forgery, barring a miracle." Perhaps the most damning indictment of the unprovenanced kouros is that no European state has ever asked for its return.
The Agrigento Youth is not quite a kouros. The word is Greek for "dude," but art historians apply it to a small group of frontal statues of nude young men from the archaic period. The Youth is later and probably represents an athlete holding a libation. The Getty kouros has been faulted as a pastiche. The treatment of the face, the six-pack abdomen, and the feet appear classical, a style that would have been unknown to an archaic sculptor working in 530 B.C. A counterargument is that the date is unknown, and one art-historic style must somehow segue into another. The Agrigento Youth is relevant, as it represents the "severe style" bridging the archaic and classical periods. Unless 99 percent of scholars are wrong, the comparison probably won't favor the Getty statue.
Email Post
Labels: Getty Villa kouroi