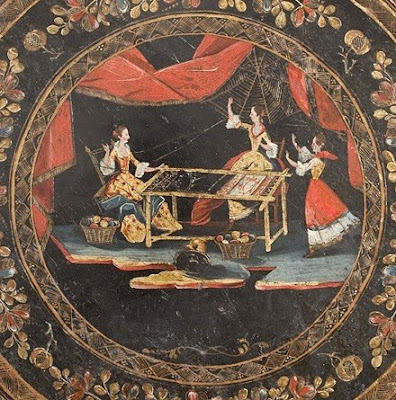 LACMA's Latin American department has made another impressive acquisition with deaccession funds from the Lewin collection. It's a lacquer tray (batea), attributed to the workshop of José Manuel de la Cerda, greatest lacquer artist of 18th-century Mexico. The tray is circular, nearly a yard across, minutely decorated with a flat-world mash-up of fete galantes, bull fights, Greek mythology, and chinoiserie. (Above, the central medallion shows the myth of Arachne, complete with a gigantic spiderweb.) The "inauthenticity" of the decoration apparently didn't bother Cerda's aristocratic patrons in Mexico and Europe, most of whom had little access to Asian lacquer. European chinoiserie populates its invented landscapes with supposed Asians; Cerda's Orient favors Mexicans decked out in British redcoats. The only comparable piece in the U.S. is at New York's Hispanic Society.
Email Post
Labels: Hispanic Society José Manuel de la Cerda LACMA

Donald Frazell said…
LACMA has done an excellent job with latin American art lately, especially our neighbors. Now,if they would just go out and get the many locally owned Rufino Tamayo's, not just his very early formative works. He is perhaps the greatest painter of the Americas, the Braque of our hemisphere, time to show why.

The probable future of world culture will most likely be to our south, in Brazil, and if they would stop killing one another, Columbia ansd Venzuela. the Olympics will show why they are the futre, and how China has tapped out. Thye know and understand, FEEL color. We need to get with it. Time for passion in art once more, its reason for existence.
March 8, 2010 at 11:47 AM