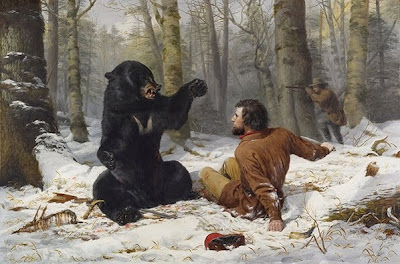 LACMA's "American Stories: Paintings of Everyday Life, 1765-1915" is two shows in one. The higher-profile show is a greatest hits collection of American painting that refuses to be limited by its nominal theme. By today's conventional thinking, paintings with a clear narrative are "illustrations," valued less than art open to multiple interpretations. That's one reason why Winslow Homer is prized more than Eastman Johnson; Thomas Eakins more than William Paxton. The good news: Through May 23, Los Angeles audiences can peruse textbook masterpieces of Copley, Homer, Eakins, and Cassatt, whether they tell much of a story or not. "American Stories" embraces everything from Colonial portraits to California landscapes. Only still lifes and Madonnas are off-limits.
That's not to say that there aren't plenty of proper narrative paintings. They comprise the show's more unruly side. Most of the flat-out story pictures are by forgotten artists, and many are ridiculous to the point of sublimity.
Consider Arthur Fitzwilliam Tait's The Life of a Hunter: A Tight Fix (above). If you like that sort of thing, get thee to Bentonville. The Tait, along with several other works, is on loan from Alice Walton's unopened Crystal Bridges Museum in Arkansas. It looks like Crystal Bridges is poised to become America's Baddest American Wing.
Tait's rip-snorter is a world removed from Homer's The Gulf Stream (below, one of the many iconic works in the show). "American Stories" wants to claim that all these paintings draw from a common well. It comes as a shock to realize that they've got a point. 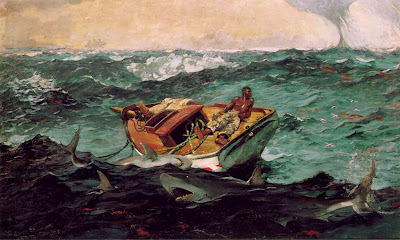 Both the Tait and the Homer present man imperiled by the forces of nature. Less obviously, both presume a viewer who delights in discovering a succession of narrative clues. "The bear's sitting on his gun!"… "The boat has no mast!" Both paintings step back a bit from the gloomy abyss, offering the possibility of salvation. The hunter's buddy is aiming at the bear, and a ship is on the horizon. Rescue looks more probable in the Tait, but it's not the first thing you notice.
Homer originally exhibited The Gulf Stream without the rescue ship. After hearing criticism that it was too dark, he added the ship, reverting to the money-making formula of earlier paintings such as Tait's. These parallels do not make the Tait a better painting or diminish the Homer. They do hint at the web of connections between art high and low. 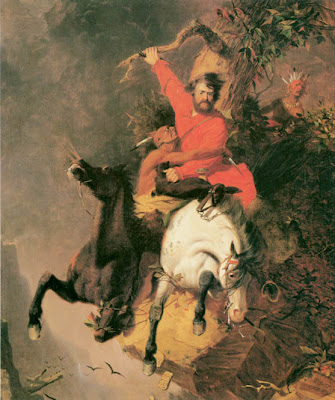 The best of the show's "bad" paintings must be Charles Deas' fantastic The Death Struggle (above). On loan from Vermont's Shelburne Museum, it's an exuberantly baroque piece evoking Rubens' Fall of Phaeton. Nothing else in the show is like it. The "story" must be that that the white guy was hunting beavers — the Indians hunted him/and or his precious beavers — the chase ending in all plunging over the precipice. White hunter clutches beaver that bites Indian that grabs hunter — a vicious cycle worthy of Sartre, or at least M.C. Escher. As Sartre said, hell is other people. And animals. 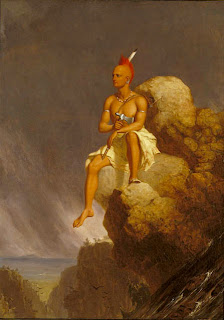 Deas is known to L.A. museum goers for his magnificent A Solitary Indian, Seated on the Edge of a Bold Precipice, probably the only worthwhile painting at the Autry Museum (not in the show). Gene didn't buy it — it was a purchase of the museum trustees. Evidently, Deas liked the theme of native Americans dangling over cliffs. The Autry painting depicts its subject heroically. In contrast, the native Americans in The Death Struggle are demonic, barely human. But they're not the garden-variety racist caricatures, either. There's a trace of Ben Kingsley in the figure at upper right. It's an amazing, troubling picture.
Charles Deas (1818-1867) was born in Philadelphia and knew the work of Thomas Sully and George Catlin. In 1840, he visited the settlements of the Sioux and Pawnee. A 1849 fire in Saint Louis is said to have destroyed most of his life's work. He went insane in 1859 (now there's an "American story" that the public has always eaten up) and died in a New York hospital in 1867. Deas' first retrospective opens at the Denver Art Museum this August.
Email Post
Labels: Arthur Fitzwilliam Tait Autry National Center Charles Deas Crystal Bridges Museum Denver Art Museum John Singleton Copley LACMA Mary Cassatt Thomas Eakins Winslow Homer

Donald Frazell said…
Painting had not yet gotten to the point of being life expressive purely through visual means, which may have started with Corot and Barbizon through Impressionism, but not truly developed til the Post-Impressionists and Modernism.

A motif had to dominate, it was how it was presented, using the entire space, and bringing it forward into ones life, rather than receding into a seperate space and world as illustration does. Creating a design, a pattern revealing the integration of god, man, and nature. Poetically and musically, not as individually dominated prosaic self glorification.

Homer frontalizes the picture plane with red blood splashes all over the water, obviously a few have been gobbled up with the 'negro" awaiting his fate. Like the white man in the ship is gonna save him, LOL! Not like Watson, and the reason Jim Brown stopped making movies.

Fitzwilliam's recedes into the distant in a tableau, like viewing a exhibit at the Natural History Museum. Though the bears head looks like a wolf wearing a combed fur parka. Realism always reveals the existence of mans hand and attempt to capture reality. And so is fantasy, not reflective of the world around us. Hollywood does this much better, illusion their trade, as Night in the Museum shows.

True creative artists have always look for the universal, but through the filter of their own experiences, which if truly intelligent and connected to life, will be shared among all humanity. But what, no Whistlers? Too European, with Japanese influence? Still American, as much as Ben Franklin who spent so much time there as well. Got Cassatt, couldnt afford the Whistlers?

The Deas are kinda interesting, on a par with Parrish and Wyeth, surprised they aren't there too. No more fantasy based than this, though more European in subject matter. Andrew of course would dominate, but after this period. His fields are like "Veteran in a new field", and shares its sprituality with Anselm Kiefer's works of devastation, and the glimmer of rebirth. God, and nature seemingly destroyed by man, yet watching, eternal,waiting for mankind to rejoin them.

Interesting show, one all artists should view, and then ask themselves, why? What is my purpose? How do I follow Truth? How do I visualize this eternal trinity, which are truly one? Is it about me, or us? We must all answer that in our own ways, but there is only one answer, Purpose. do we have one? What is mine?