Getty Got a Turner, or Maybe Not 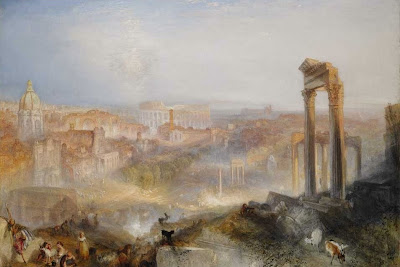 The Getty Museum was high bidder for J.M.W. Turner's fantastic Modern Rome—Campo Vaccino, auctioned for $45 million at Sotheby's. The Getty press release talks like it's a done deal. Ditto for the New York Times and Wall Street Journal (where Thomas Kren volunteered the unusual-for-Getty detail that the museum hadn't reached its bidding limit). The L.A. Times is more skeptical ("Getty Museum ready to buy J.M.W. Turner masterpiece for $49.9 million--if Brits won't match the price.") Under British law, a U.K. museum or even a private collector could pre-empt the sale by matching the price. The question is, will any British party be willing or able to raise $45 million in this economy?
It can be argued (from an American perspective) that the last thing Britain needs is another Turner. The artist bequeathed the cream of his output to the British nation. It is now at the Tate Gallery (which has about 300 Turner paintings and 30,000 works on paper) and the UK National Gallery. As with Spain and Velazquez, Britain clutched Turner to its bosom too tightly for the artist's own good. Turner's international profile would be a degree higher, were there a few more major Turners not in Britain. You can go to New York and see rooms of Rembrandts and Courbets and Monets. But the Met has just three Turners, and only one of them great. The Huntington Library, that shrine to British art, has two Turner oils.
Britain's museums have modest acquisition funds. They block export when they are able to tap into patriotic sentiment to raise the huge sums required. "Patriotic" need not entail "British." Over the years, the British have claimed country house Raphaels, Titians, and Canovas as patrimony (and in each case, foiled the Getty). Turner is an authentic Englishman. The British are not likely to be less territorial about that.
Still, it's tough to imagine the Tate launching a $45 million campaign to buy its 301st Turner. Modern Rome would make more sense for the London National Gallery, and still more for the National Gallery of Scotland (NGS), Edinburgh, where the painting was on loan since 1978, and which owns no Turner oils. Another Turner painting of Rome is on loan to the NGS from the Earl of Rosebury, the collector who lent Modern Rome. 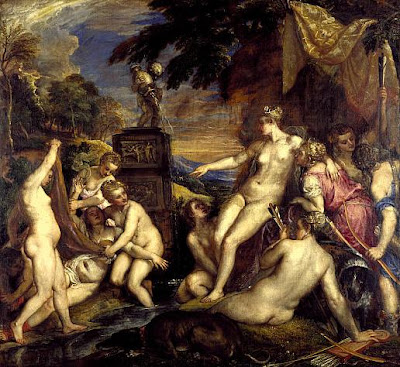 Edinburgh's population is roughly that of Long Beach. Nevertheless, Edinburgh's and London's National Galleries are jointly raising 100 million pounds to buy two Titians from the Duke of Sutherland, Diana and Actaeon (bought last year) and Diana and Callisto (above; they're still raising the money). In March, when the Modern Rome sale was announced, The Scotsman quoted an unidentified NGS spokesperson: "We are not in a position to acquire it. We have a strong collection of 19th-century British art. We are obviously sorry to see it go, but we have been delighted to show it over the last 30 years." 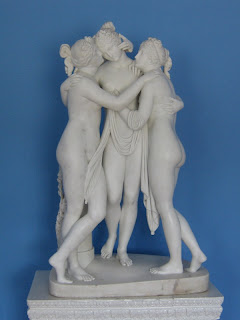 The $45 million bid was also heavy lifting for the Getty, which hasn't bought anything in that price bracket for over two years. Not in question is what Modern Rome—Campo Vaccino could mean to the Getty collection, if it ever lands there. It would be the Getty's greatest British picture, and the most important work of the Romantic movement. Modern Rome would connect the dots between the antiquities at the Villa and the later art at the Getty Center. Canova's The Three Graces was supposed to do that. The Getty's deal to buy the Canova was nullified in 1994, when its sale price was matched by the Victoria & Albert Museum and the National Gallery of Scotland.
Email Post
Labels: Getty Museum J.M.W. Turner National Gallery (London) National Gallery of Scotland Titian Victoria and Albert Museum

Steve Roach said…
Also, I have to think that with the recent fundraising drives in Great Britain for the Raphael in 2002, the Titians, and a few others, the well has run dry in terms of public support. It's like saying that Boston needs another Monet, even if it's really pretty. See also: http://theartoflaw.blogspot.com/2010/07/getty-center-finally-puts-its-money.html
July 7, 2010 at 3:03 PM

Donald Frazell said…
This would be wonderful, we dont have many Turners in America let alone LA, always enjoyed the Fricks when there. i can do without Titians typical over the top show piece, he is interesteting, but rather get Goyas and Rembrandts and quattrocento painters. Italians weren't good with oils except in portraits, and dont get me started with the perv caravaggio. Dark and moody and far from realistic, just angry, not that far from hogarth. Artistes love him now because we are in asimlar decadent age.

And forget Canova. i like this quote from an old art book i have called The Modern World. "Canova with his assistants was responsible for a great quanitity of what Hildebrandt later described as 'petrified human bodies'".
More like porcelain figurines for grandmas mantle. Well done, but hopelessly tacky. The Brits did us a favor.

Anonymous said…
This is a great Turner, yet it does not fit at all with the Getty's paintings collection. I heard a Getty curator once say that they did not buy British paintings because there are already enough masterpieces in LA at the Huntington.
July 10, 2010 at 8:50 AM

Donald Frazell said…
It's not really British, it is an early modern piece, as Michelangelo was too, among the first to paint energy, and go directly to the soul through feeling with the eyes with no literary or psychobabble dependancy, something so rare now. Turner was closer to a late Monet and even AB Ex painters, as were Cezannes watercolors, than Reynolds or Gainsborough, though i also truly appreciate Constable. Still, turner was a great artist, and that knows no set time.
July 14, 2010 at 10:39 AM

scott davidson said…
Beautiful banner at your site as well, I am reminded of some wall paintings by the Mexican artist, Diego Rivera, such as this one http://EN.WahooArt.com/A55A04/w.nsf/OPRA/BRUE-8BWNY4. You browse more murals of his at wahooart.com.
October 20, 2012 at 12:12 AM