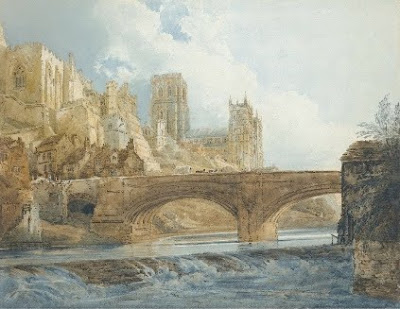 The Telegraph is reporting that the Getty Museum bought a Thomas Girtin watercolor, Durham Cathedral and Bridge, at Sotheby's last week. The sale featured the collection of British fertility doctor Ian Craft, well-known across the pond for his arguably ethical egg-trading schemes. The Getty paid 265,200 pounds. The Telegraph speculates that the museum was also an underbidder for the auction's highest-priced work, a John Cozens watercolor of Lake Albano that went for an incredible 2.4 million pounds. The winner of the Cozens was Baron David Thomson, son of the Anglo-Canadian tycoon who outbid the museum for Rubens' Massacre of the Innocents in 2002.
Between that and the pending purchase of Turner's Modern Rome, the museum is showing unusual interest in British art. Girtin and Turner were the Matisse and Picasso of British watercolors. Girtin died at age 27. Turner said, "had Tom Girtin lived I should have starved."
Email Post
Labels: Getty Museum J.M.W. Turner John Robert Cozens Thomas Girtin

scott davidson said…
Nice way to decorate your walls. I have never done that. My effort to beautify the walls in my house was to order big-sized canvas prints from wahooart.com, from images of western art. I use the same angel motifs in all of the rooms painted by different painters, such as this one by very interesting English artist Stanley Spencer, http://EN.WahooArt.com/A55A04/w.nsf/OPRA/BRUE-8LT7K6
April 18, 2013 at 12:30 AM