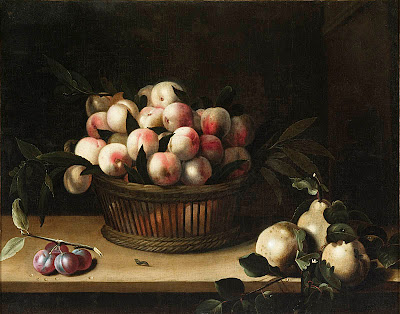 LACMA has just doubled its representation of pre-1800 women artists. The latest Ahmanson Foundation gift is a still-life by Louise Moillon, Basket of Peaches, with Quinces and Plums (after 1641). It joins the museum's sole other female "Old Master," Clara Peeters, and might help to make sense of the peculiar painting by Moillon's lesser-known brother that the museum bought last year. There are two other Louise Moillon still-lifes in Pasadena, acquired by the prescient Norton Simon.
The Ahmanson Foundation must be on a Louise kick. Not yet on view is a 2009 gift, Jean-Joseph Carriès' Portrait of Loyse Labbé (more often spelled Louise Labé). Made around 1887, it's an imaginary portrait of the great female poet of the French renaissance. Labé, daughter and husband to wealthy ropemakers in Lyons, was also known as La Belle Cordière ("the Beautiful Ropemaker") and the French Sappho. Like Joan of Arc, she dressed like a man and fought for the Dauphin. There also seems to have been a famous whore nicknamed La Belle Cordière, and a 16th-century urban legend claimed the courtesan and the poet were the same. Even more improbable is a more recent scholarly theory claiming that Labé did not write the poems published in her name. They were supposedly the work of a consortium of male poets. 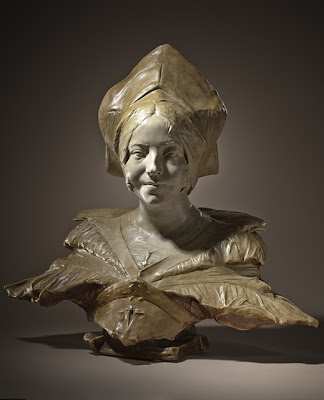 Labé and her mystery must have appealed to Carriès, who also lived in Lyons. His stoneware bust makes an interesting comparison to the roughly contemporary sculptures of Jean-Léon Gérôme now at the Getty. Both artists reacted to the age of photography by creating hyperrealist sculptures that can be offputting. It's hard to say whether the long-dead Labé would have appreciated the batwing outline and beatific expression Carriés gave her. (Sarah Bernhardt apparently had no problem with the kitsch atrocity that Gérôme created in her image.) Unlike Gérôme, Carriès used realism as a vehicle for a pessimistic and philosophical imagination. He found a congenial subject in Labé, a woman about whom everything we know may be wrong.
Email Post
Labels: Jean-Joseph Carriès Jean-Léon Gérôme LACMA Louise Labé Louise Moillon Norton Simon