How LACMA Got “The Wrestlers” 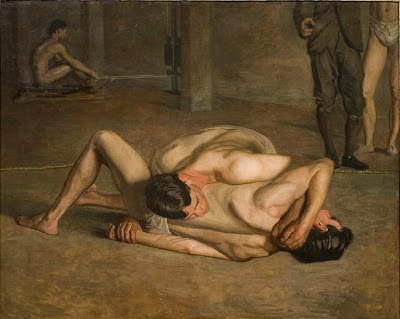 Thomas Eakins' The Wrestlers is the greatest American painting in LACMA's collection. Amazingly, it was once the greatest painting in two other museums' collections — both of which sold it to raise money. MOMA doesn't deaccession Les Demoiselles d'Avignon. Why did two museums sell The Wrestlers?
LACMA curator Ilene Susan Fort now gives the back story in an unusually candid article, "Wither the Wrestlers?" published in June's American Quarterly. (Unfortunately, it's not online.)
Eakins painted The Wrestlers in 1899 and gave it to the National Academy of Design in 1902. It was a "diploma picture," a gift required of newly elected academicians. The NAD has thereby assembled a considerable collection of American art, which it exhibits in a small museum in Manhattan. In 1968 the NAD put The Wrestlers on the market, and in 1970, it was snapped up by the Columbus Museum of Art. They too sold it in 2005. Meanwhile, LACMA patron Cecile Bartman was thinking of buying the museum a Hopper. (Edward, not Dennis.) When The Wrestlers became available, she recognized its capital importance and funded the purchase in 2006.
What makes this history particularly puzzling is that Eakins has never really been out of favor. Museums dumped Hudson River and trompe l'oeil paintings in the early 20th century, believing them to be irrelevant in the modern age. Yet Eakins' reputation sailed ever higher. The soaring market value of Eakins' paintings must have tempted NAD and Columbus to sell. Still, that can't be the whole explanation. 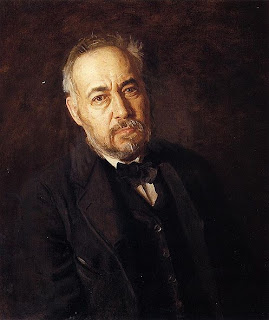 It turns out the NAD wasn't crazy about Eakins' gift. Fort cites a 1930 letter in which NAD's secretary, Charles C. Curran, tried to talk the College Art Association out of borrowing The Wrestlers for a show: “I cannot say that it is a very fine example of his work.” Curran proposed instead the “much finer” self-portrait (pictured), which remains in the NAD collection.
The NAD is a funny place. It's housed in the Fifth Avenue mansion of Archer Milton Huntington, the possibly bastard son of Arabella Huntington. (The father may or may not have been Collis P. Huntington, uncle to Henry.) There's no permanent space for the NAD collection. As the years went by, the NAD became a bastion of conservative, representational art. Many New York museum goers have never been there.
That must be why there wasn't much of an outcry when The Wrestlers left New York. The NAD said it needed the money to conserve and frame paintings for exhibition. Fort reports that two Academy members, artists Joseph Hirsch and John Koch, protested — but that was about it. The NAD required that the painting be sold to a museum. The lucky beneficiary was the Columbus Museum of Art.
Columbus has one of the best U.S. museums for a city of its size (over 700,000). Its American collection is arguably better than LACMA's. Up until 2005, there was no "arguably" about it, not when Columbus had The Wrestlers and LACMA didn't. Then Columbus sold the great Eakins. The reason was an opportunity to purchase the collection of politically edged representational art assembled by Chicagoans Philip J. and Suzanne Schiller. The Schillers collected many of the overlooked artists the NAD champions — Rockwell Kent, George Tooker, Ivan Albright — as well a greater number of lesser figures (pictured, Tooker's Lunch, 1964). 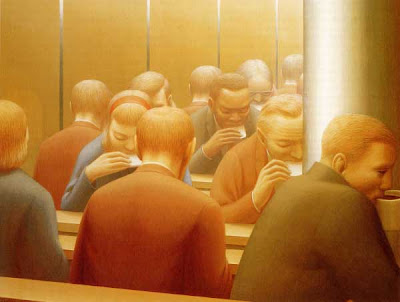 Was it a good trade for Columbus? It's hard to overstate how fantastic the Schiller trove is — but no, you shouldn't trade away the picture that put Columbus on the map.
In the American Quarterly article, Fort writes,

"Was the selection of Wrestlers based solely on market value, or was there another determining factor? The museum has remained silent on the matter, explaining only that the painting was “increasingly isolated from the collection.” I would like to suggest that Columbus chose Wrestlers over any other realist painting because of the changing scholarly perspectives on the artist.… With this new perception, the two figures struggling in a wrestling hold come to symbolize the artist and his own psychological battles, among them, Eakins the straight man versus the homosexual. Although Internet sources rate Columbus a “gay friendly community for travelers,” and the region has a significant gay and lesbian population… the questions raised by Eakins’s biography and by the suggestions of homoeroticism in his work have tended to isolate art such as this. The painting thus became an image inappropriate for a moderate-size art museum in middle America."

If Fort is right, homophobia landed LACMA the best American painting west of… uh, another Eakins painting of naked guys in Fort Worth. But with Eakins, nothing is simple. His homosexuality (like that of John Singer Sargent) is a matter of plausible conjecture, not fact. In fairness to Columbus, they swapped The Wrestlers for Schiller works by Tooker and Paul Cadmus, who have to qualify as "gayer" than Eakins.
Like any great work of art, The Wrestlers resists any single reading. The last of Eakins' sporting pictures, it's the most engimatic — five figures, and nobody's face is visible. You can find echoes of Eakins' pictorial puzzle-making in Tooker's faceless crowds and in Edward Biberman's Conspiracy (c. 1955, below). Biberman, brother of a blacklisted screenwriter, based it on the McCarthy hearings and that era's closeted antihero, Roy Cohn. 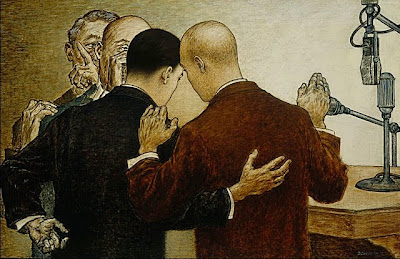 Steve Roach said…
Another fantastic post that inspired me to think more about the role of mid-sized museum collections and the importance of a collection telling a story.

I argue that the Columbus sale is good in that it keeps an important painting under public ownership, while placing it in a setting where it can be seen and understood by more people. Columbus wins by getting a whole collection that better fits in with its current holdings.
July 30, 2010 at 12:02 PM

Mark Venaglia said…
I appreciate the scholarly and especially sensitive approach to the gay subtext in the artists' work indictaed- though even the current utilization of that word was unheard of at the time. It was my ongoing honor to parade hundreds of incredulous adult students before that very Eakins at LACMA, as Artist in Residence at The LA Gay & Lesbian Center. The responses were inspiring (and hilarious!)for all- including the numerous hetero aesthetic supports who delighted at being in on the visual joke- so blatant, it went unspoken for nearly a century.
April 16, 2011 at 10:20 AM