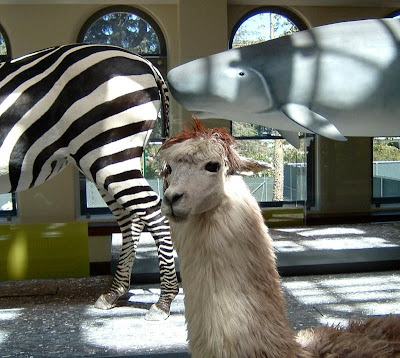 Natural history museums are often dark, windowless, and confusing. Given that, the Natural History Museum of Los Angeles County's new mammals hall is a revelation. Airy and flooded with daylight, it's one of the most appealing museum spaces in Los Angeles.
The hall is a refurbishment of one of the 1913 museum's three wings. The Romanesque arched windows are original fabric; the high-tech skylight is new. To take advantage of all that light, "The Age of Mammals" mixes taxidermy specimens into a palette of bone white and La Brea black. It sounds a little dubious, but it works. The fossil skeletons remain the main attraction, standing up to the cuddly animals and some big-ass flat-screens. 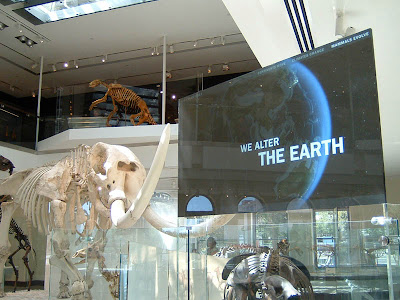 The new installation includes objects not shown before, such as its centerpiece, the Simi Valley Mastadon (above). In recent years, suburban real estate development in the hills has been a major source of finds. That's an unintended postscript to the display's environmental pleading.
There's a lot of text, on printed panels and video, but it's sometimes unclear what's real and what's not. Like Italian panel paintings, fossil skeletons are usually a patchwork of the real thing and artfully concealed restoration. It's common practice to show casts of fossils, as NHMLA does here with the famous proto-human "Lucy." A visitor who patiently read the labels could go away thinking this is the real Lucy. It's not, of course. Lucy is owned by the National Museum of Ethiopia, and even it shows only a plaster replica. LACMA would never show a reproduction of the Mona Lisa in a way that might allow a visitor to confuse it for the original. Why shouldn't natural history museums be as forthcoming?
The mammal hall adjoins L.A.'s old-school museum moment, the Rotunda. It often stands in for Eastern museums in movies. (In Spiderman, it's where Tobey Maquire is bitten by a radioactive spider.) In the original museum plan, three wings radiated off the Rotunda, one each for science, history, and art. Julia Bracken Wendt's sculpture of Three Muses served as a kind of guidepost. The Rotunda now has a curiosity cabinet exhibit of unusual objects from the collection. On the upper floor is a mini-retrospective of the equally curious American painter Charles R. Knight (1874-1953). Brooklyn-born and legally blind, Knight used special glasses to achieve success as a commercial illustrator in New York. He's best known for iconic paintings of dinosaurs and other prehistoric creatures, created for natural history museums nationwide. Knight probably influenced the movies more than Jean-Léon Gérôme did. Special effects maven Ray Harryhausen credited him as an influence. Knight did the La Brea murals for NHMLA (they're now at the Page Museum), which impressed the young Harryhausen. The Rotunda exhibit is a much more modest set of small paintings, Life Through the Ages. Knight did several versions of the set, of which this is the last, created in the mid 1940s, just as abstract expression was starting to change how Americans looked at art. It's possible to see echoes of early Rothko or Baziotes in some of Knight's undersea fantasies. Otherwise, his references are more traditional. Knight presents the distant past as a mix of German romantic snowcapes and Highwaymen tropic paradises. His work is half-naive, half as knowing as a fashion illustration. Like much fashion imagery, Knight's pictures force the comparison to surrealism — what else can you call mid-20th-century imaginings of nature turned strange? 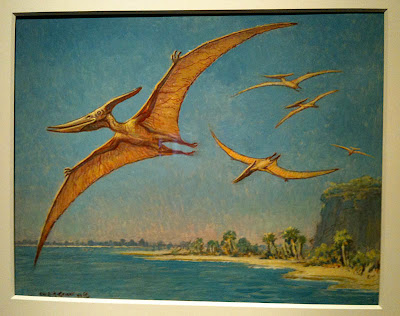 The museum's renovation included much needed work on the stained-glass dome designed by Walter Horace Judson (below). The art wing once boasted an even more celebrated stained glass ceiling by Louis Comfort Tiffany. In 1946 legendary art curator William R. Valentiner organized a loan show of paintings by Rubens and Van Dyck. Valentiner didn't want the Tiffany ceiling's parti-colored light falling on his precious Old Masters. He ordered the Tiffany stained glass discarded — not “deaccessioned,” just ripped out and thrown in the trash. Said Valentiner: “Everybody agrees that it is an ugly feature.” 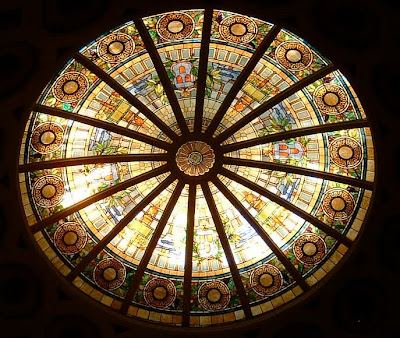