Anyone who's visited the Broad knows how tough it is to score a few seconds inside Yayoi Kusama's infinity mirrored room. How in the world are they going to show six infinity rooms?
The six rooms are in "Yayoi Kusama: Infinity Mirrors," now at the Hirshhorn and coming to the Broad in October 2017. See reports on the show's crowd control in the Washington Post and New York Times; photos tagged #InfiniteKusama.
During this week's blizzard, the Hirshhorn discontinued walk-up passes, lest people in line die of exposure.
From the Times:


“Keep it moving,” guards yelled as visitors lingering in front of Ms. Kusama’s canvases of hypnotic nets and dots.
Visitors who had stood for hours in lines looping around the building discovered more of the same inside.
Some scrolled through their phones. A cry of outrage came from one woman in line, snugged against a wall with diminished cellphone service. “I can’t even get on Instagram,” she wailed.…
Ms. Donnally, 61, and her husband, from Washington, were turned away from the show on their first try. On their second attempt, they arrived more than an hour before the museum opened at 10 a.m. They did not get all the way through “Infinity Mirrors” until 4 p.m.
“I hadn’t realized it would take all day,” Ms. Donnally said. 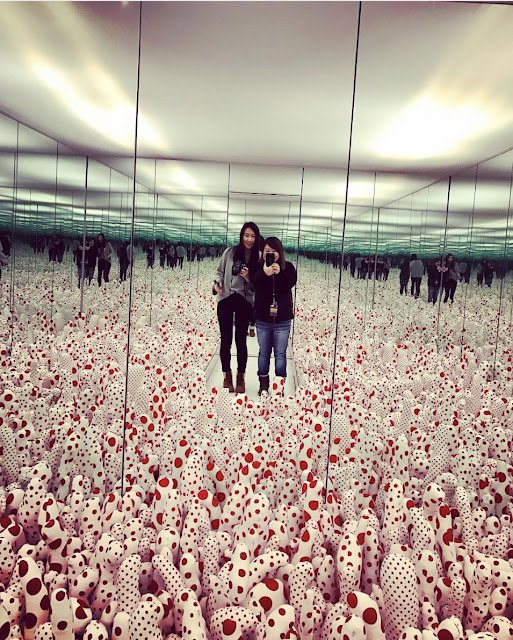