Mehretu Meets Saville at the Broad 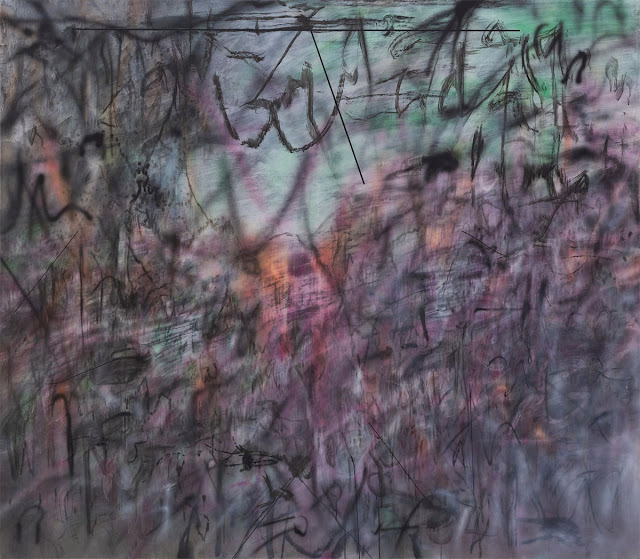 Since its September 2015 opening the Broad has gradually rejiggered its third-floor survey of contemporary art. One of the "new" rooms shows just four large paintings, two each, by Julie Mehretu and Jenny Saville. It may seem an odd pairing, but the artists are exact contemporaries, each born in 1970.
Mehretu's Conjured Parts (eye), Ferguson (2016, top of post), is part of a non-architectural series shown at Marion Goodman Gallery last fall. As the title indicates, it's a response to the 2014 Ferguson, Missouri, unrest. It is thus the Broad's second major Ferguson artwork, after Robert Longo's (not on view). Like the Longo, the Mehretu is based on a photograph, but unlike it, it's a skein of black lines over veils of color, evoking Paul Klee and street art.
Last year Mehretu said of this series, "I was interested in, when you blur these photographs—if you removed all legible information—it still had this almost haunting dynamic taking place, this apparition within the blurred aspect of darks and lights."

Mehretu's unlikely Bunker Hill bunkmate is Jenny Saville. Saville's Strategy (1994), is a looming, 9 x 21 foot triptych. (In impact it dwarfs Thomas Houseago's Giant Figure (Cyclops).) YBA Saville credits a University of Cincinnati scholarship to awakening her interest in the artistic possibilities of plus-size flesh. She found "Lots of big women" in the Midwest; "big white flesh in shorts and T-shirts. It was good to see because they had the physicality that I was interested in."