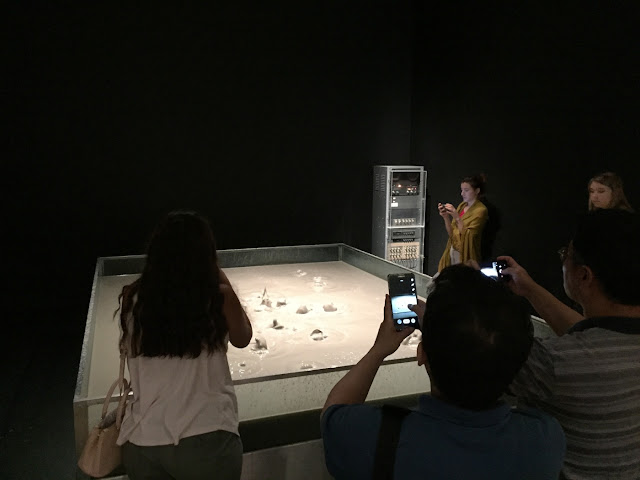 The most Instagrammed work in the Museum of Modern Art's current Robert Rauschenberg show must be Mud Muse (1968-71), created as part of LACMA's (original) Art and Technology Program. Rauschenberg collaborated with a team of engineers from Teledyne, the aerospace firm that also produced the Water-Pik. Mud Muse is a sound-activated vat of gurgling mud. Responding to tape-recorded sound, a refrigerator-size electronic brain triggers a pneumatic device to pump air up through synthetic mud, producing a medley of glops and splattering those who stand too close.


Today Mud Muse must be read in the scatological spirit of Paul McCarthy. But in the late 1960s it was understood to be about love. Critic David Antin described it as an "interactive work of art conceived as the perfectly responsive lover." Rauschenberg said he hoped viewers would "get involved with Mud Muse on a really physical, basic, sensual level." They did. At the first viewing visitors couldn't resist touching the mud, playing with it, and making a big mess. Thereafter it was closely monitored by a guard.

MoMA, which tends to think that all art produced in L.A. has to do with cars and surfboards, discerns a different inspiration here.