Anti-gentrification activists from Boyle Heights protested the opening of Laura Owens' show at the Whitney Museum, New York. They are demanding that Owens leave her studio and gallery space, 356 Mission, out of concern that artists such as Owens raise rents in the working class neighborhood. Hyperallergenic has an interview with a protestor. (At top, ubiquitous Boyle Heights activist Angel Luna.)

The New Yorker's recent profile of Owens offers this context:

[Owens] wrote to me, “I have conducted myself and lived my life as an engaged citizen in my city and my various communities,” and she has empathy for victims of displacements that are “tragic and very real.” Last spring, she sought and got a meeting to discuss the situation with members of the activist group, who proved unbending. “Their single and inflexible demand is that we hand over the keys of the space to them and end 356. It is also very important to them that I ‘leave graciously’ by signing a document saying I agree with all their ideas and I have learned from them.” Subsequently: “All of the staff and our friends have talked this over, asked community members, done research and do not believe we have found any evidence this will result in the reversal of gentrification.” It’s a fact of experience that the appearance of artists and galleries in low-income areas reliably portends rising real-estate values, with dire consequences for many residents. What’s rare in the case of 356, which owns no property and has no monetary investment in Boyle Heights, is the sensitivity of its leader, on the horns of an irremediable dilemma. An adage about the inevitable fate of good deeds springs to mind.

Below, a 2015 painting from the Whitney show, made from printing plates Owens found in her studio, a former printing plant. 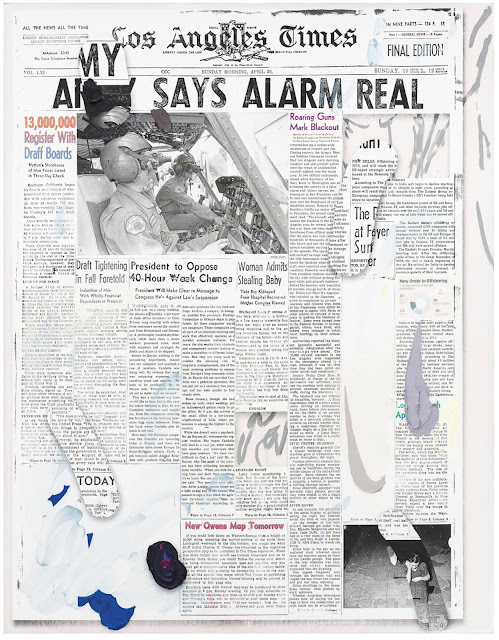