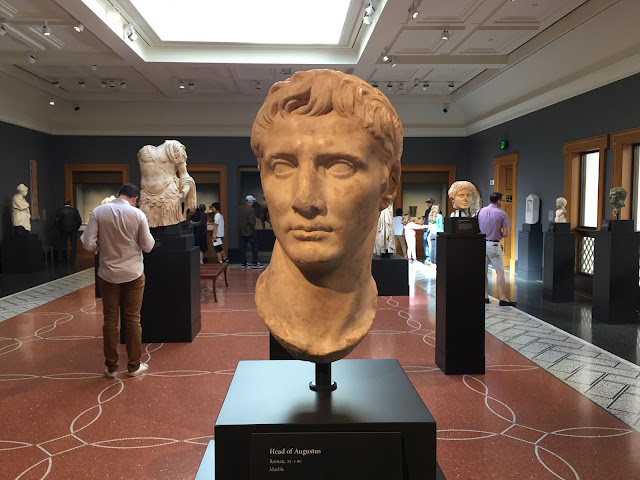 The Getty Villa is replacing its thematic, "lions and bears" installation with a more chronological one. It is now about halfway through the changeover, set to be completed in early 2018. The upper floor, showing Roman art, has been fully reinstalled. A new first floor gallery of Neolithic and Bronze Age Greek art is also open.

Themes v. Chronology. When the Getty Villa reopened in 2006, rooms were organized around populist themes like wine, women, and monsters. This was (take your pick) "accessible" or "dumbed down."

Antiquities curator Jeffrey Spier's new Roman rooms are both an improvement and not all that different in general effect. Though more chronological, they too are built around easy-to-understand themes—a "Roman Treasury," "Collecting Antiquities," the "Roman Villa," etc. The large rooms that were "Men in Antiquity" and "Women and Children" are now co-ed. One is labeled "Early Roman Sculpture" (installation view at top), and the other is "Later Roman Sculpture."

The former installation had rooms on Cycladic sculpture, Greek and Roman Glass, and Roman Egypt. The new install has very similar rooms, edited, and some have been moved around. 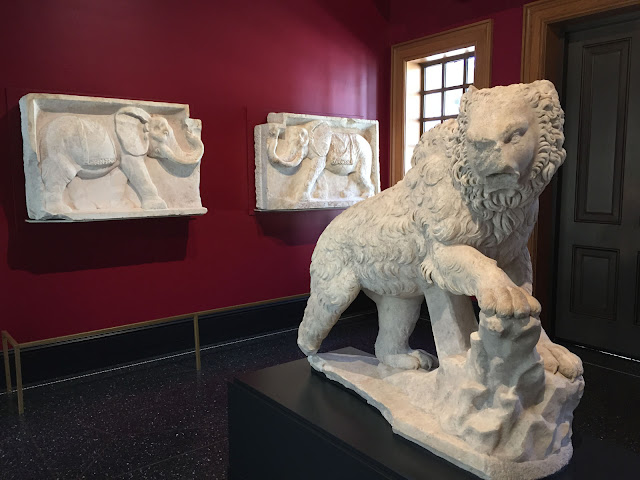 Miss the lions and bears? A small room has a bear and two elephants. That should satisfy anyone's desire for a Roman zoo. As to the lions, you just have to hunt for them.

Pantone 2018. The bear-and-elephants room is painted a ripe cranberry. Overall, the wall color choices will please any hipster home flipper. 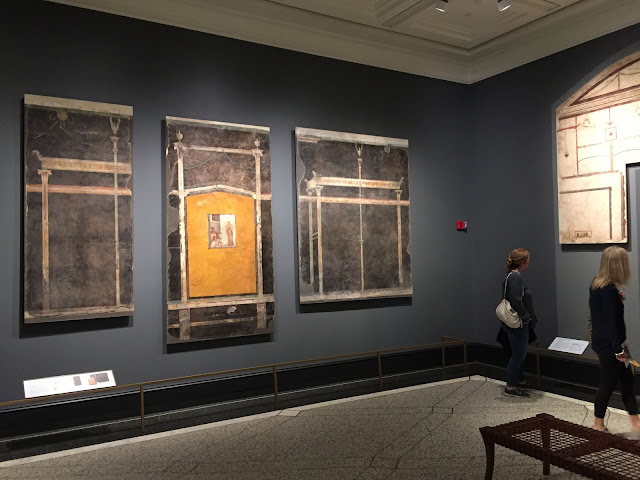 The Villa of Numerius Popidius Florus. The Getty has put on view fresco wall paintings from the Villa of Numerius Popidius Florus in Boscoreale, the hard-working Oxnard to glittery Pompeii's Malibu. (Vesuvius made no social distinctions and buried both in red-hot ash.) Florus was a gentleman farmer who could afford to decorate his home in the fashionable Third and Fourth Styles of wall painting. The Getty paintings are well-documented and come from two known rooms in Florus' villa. Long in storage, they are now shown with candelabra and other objects recovered from the same site. 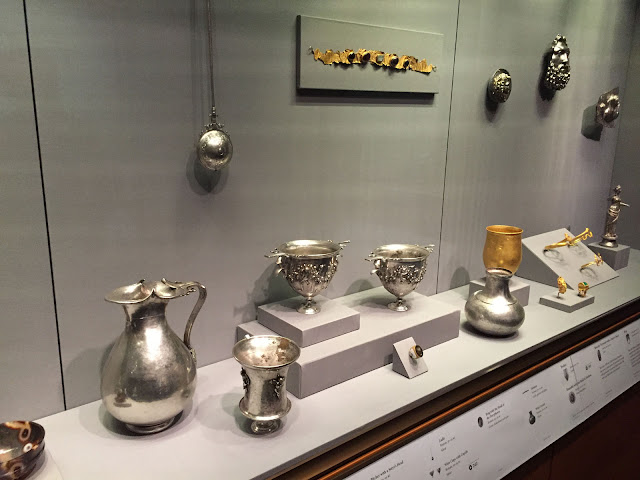 Roman Treasury. A small room of gold, silver, and gems incorporates loans from other collections. Among them are sets of Roman coins and medallions, the mini-portraits that inspired Pisanello. Touch screens convey information about each famous (or notorious) overlord. 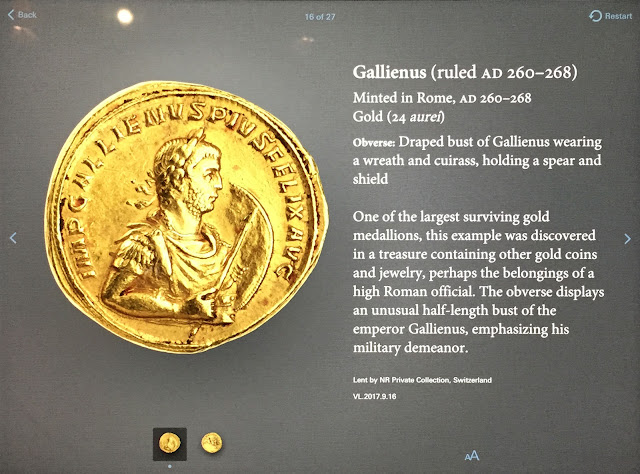 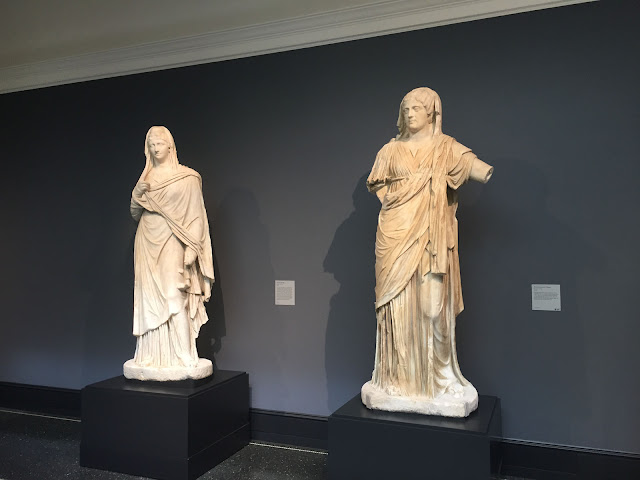 A Lady and a Prince. On view for the first time is a "new" statue of a Roman aristocrat, assembled from a head the Getty bought in 2016 and matched to a headless figure long in the collection (at right above). The woman has not been identified but must have been of considerable status. She's shown next to the Getty's statue of Faustina the Elder, wife of Emperor Antonius Pius (left). The unidentified portrait is more compelling, raising the question: Who was she? 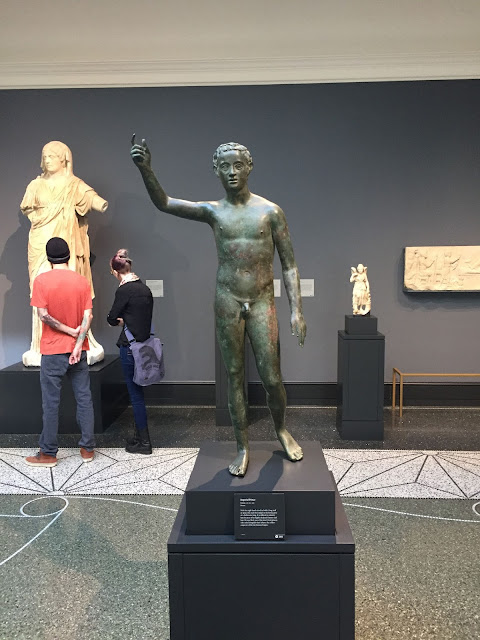 And who was he, the third-century Imperial Prince? It's a Roman "Getty Bronze," acquired in J. Paul Getty's time but not shown in recent decades. 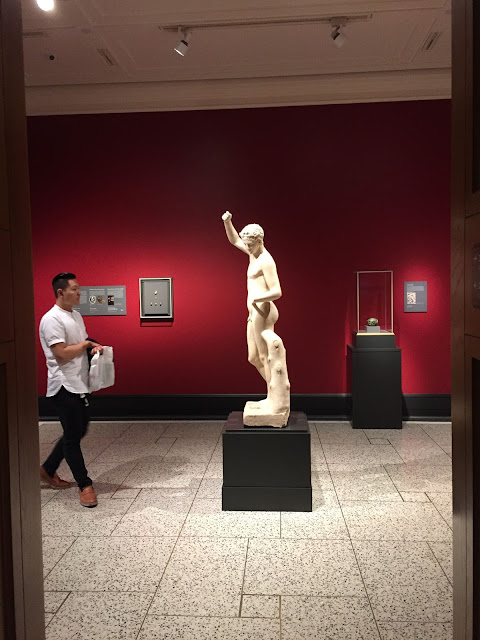 Collecting Antiquities. Anchored by the statue of a Satyr Pouring Wine, from the Chigi collection, this room shows works from historically famous collections. The collectors range from Lorenzo de Medici to Lord Elgin. Most jaw-dropping is Adolf Hitler, who acquired a bronze statuette, now identified as Luna, for his planned museum in Linz, Austria. It was restituted to the Netherlands and passed through several collections, including the Fleischmans', before being acquired by the Getty in 1996. 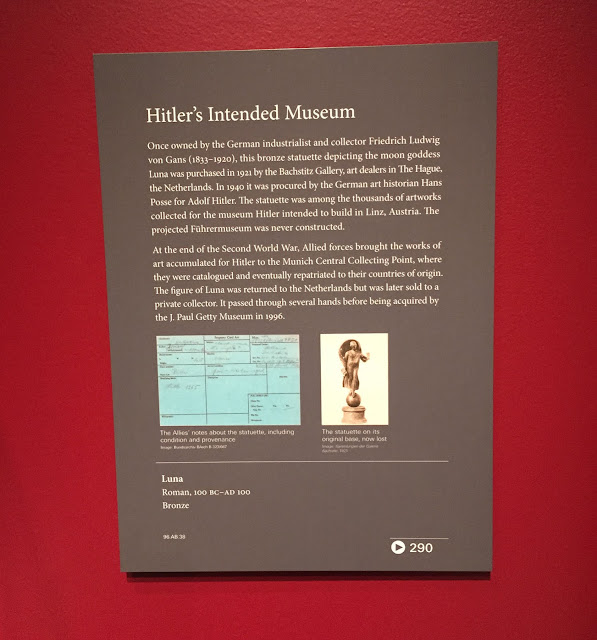 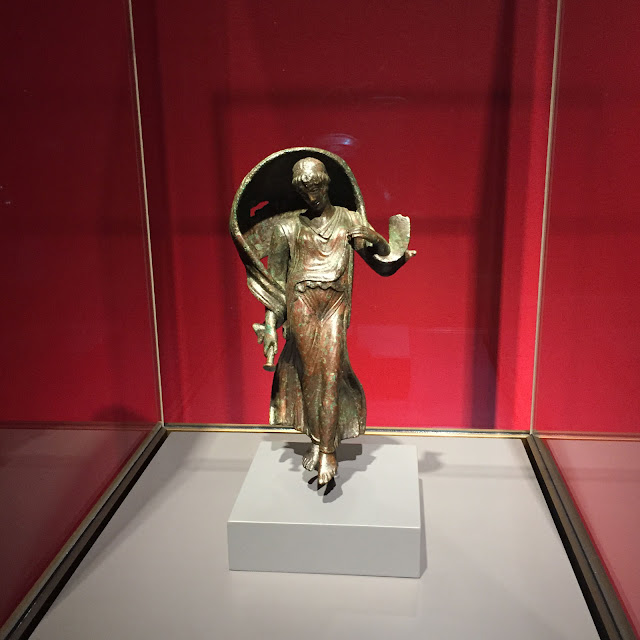 Late Antiquity. Chronologically the new installation ends with a small but powerful gallery on "Late Antiquity." It shows loans of early Byzantine art from the James E. and Elizabeth J. Ferrell collection. A sixth-century Byzantine Head of an Emperor, perhaps Justinian, has a stare unlike any work in the collection. 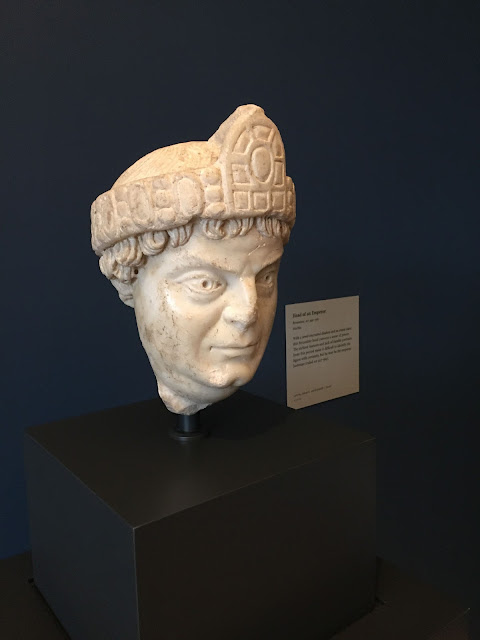