"Painted in Mexico" at LACMA 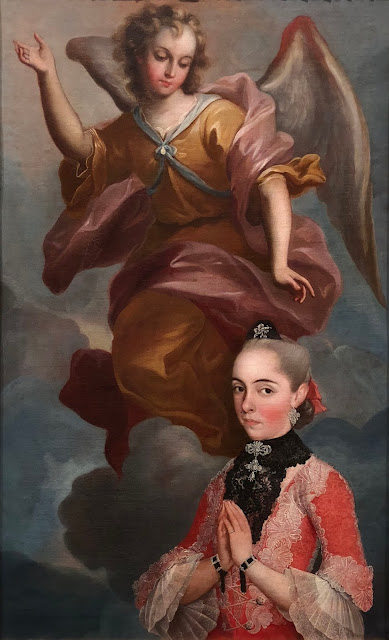 The 18th century was when Mexican art went global. In Europe this was the age of the Rococo and the Enlightenment; and in Mexico too, artists explored brighter colors, asymmetry, playfulness, and empiricism. Sometimes all are combined in one painting, as in Miguel Cabrera's Portrait of María Bárbara Guadalupe de Ovando y Rivadeneyra with Guardian Angel, c. 1760. This was also the century in which Mexican painters sought to distinguish themselves from European precedents. The most ambitious art remained devotional, sometimes exhibiting a twee magic realism (below, another Cabrera, The Divine Spouse, c. 1750.) 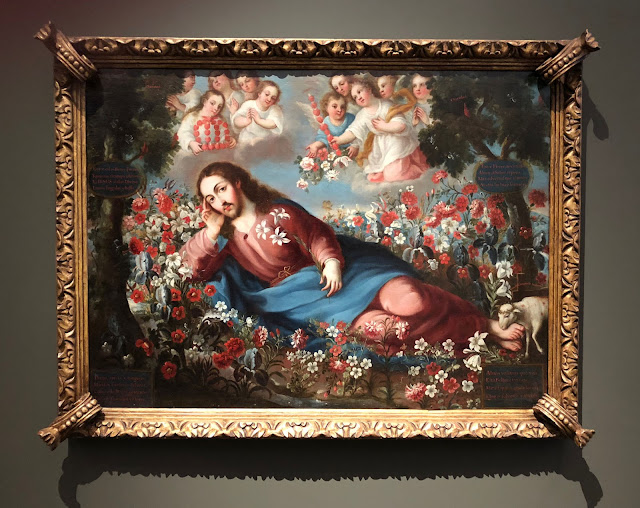 Such art has been a hard sell to American audiences. Contemporary viewers roll their eyes at sincere religious paintings (unless they're by Leonardo?) Some hipsters appreciate this art as an exemplar of "bad taste." But if you're ready to take Mexico's painterly tradition seriously, you won't find a better introduction than LACMA's "Painted in Mexico, 1700-1790: Pinxit Mexico." Co-curated by the museum's Ilona Katzew, it brings together over 100 paintings, many monumental in scale and by the most esteemed artists of the period. The last of the mega-PST LA/LA exhibitions to open, "Painted in Mexico" represents years of new scholarship (in English and Spanish editions of its catalog). Many of the works have never been published or shown in museums before. 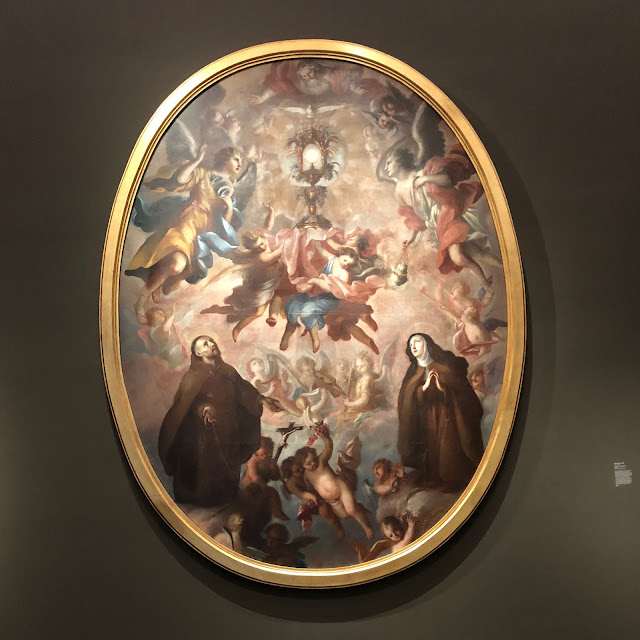 The show starts with a bang, the huge, oval-shaped Apotheosis of the Eucharist (1723) by Juan Rodriguez Juárez. The luminous, free-floating composition bears some comparison to those that Tiepolo was only beginning to paint in Venice. In general Mexican artists looked back to Murillo and the Genoese Baroque, and knew contemporary European developments via prints. 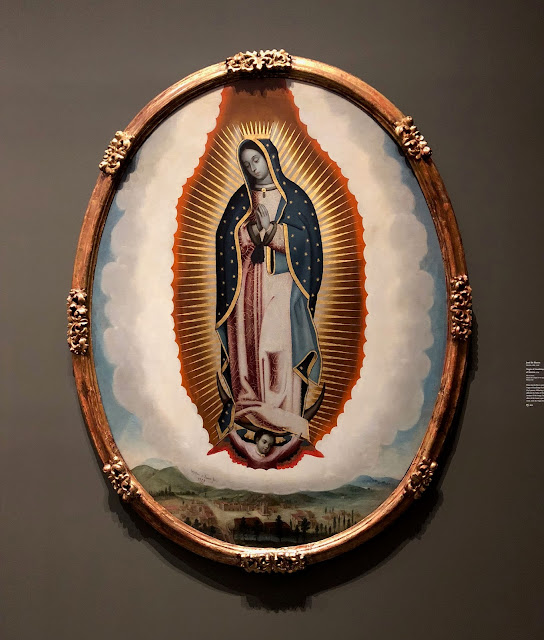 The main story of "Painted in Mexico" is how Mexican artists asserted their independence. The nexus of Mexico's Christian art history is the Virgin of Guadalupe. Dated to 1531, it was recognized by Pope Benedict XIV in 1754. That spurred the already brisk trade in copies in all sizes, media, and levels of quality (a production that continues to this day). LACMA is showing two famous examples. José de Ibarra's Virgin of Guadalupe and View of the Valley of Mexico (1739) situates the icon in a puffy cloud above a landscape.

Who painted the original Guadalupe? The faithful say God himself. Today's skeptical art historians throw out the name Marcos Cipac de Aquino (died 1572), a Christianized Nahuatl artist. But Pope Benedict created an 18th-century controversy by refusing to class the Guadalupe as a divinely made icon. 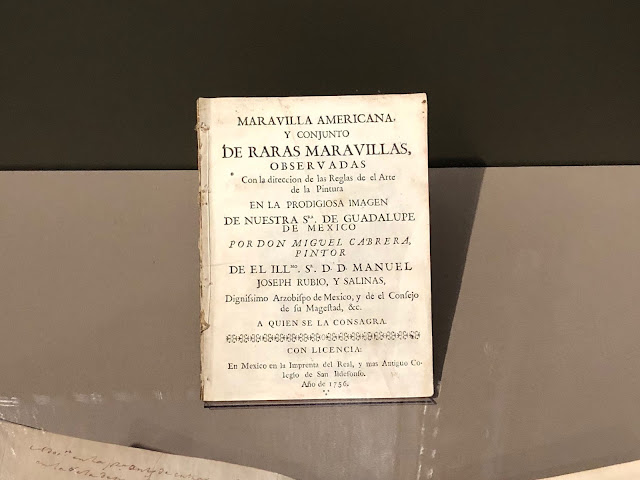 Miguel Cabrera was among those who disagreed. He published his own analysis, Maravilla Americana (1756), arguing for a supernatural origin. A copy is here, and it's notable as a founding document of Mexican art history. 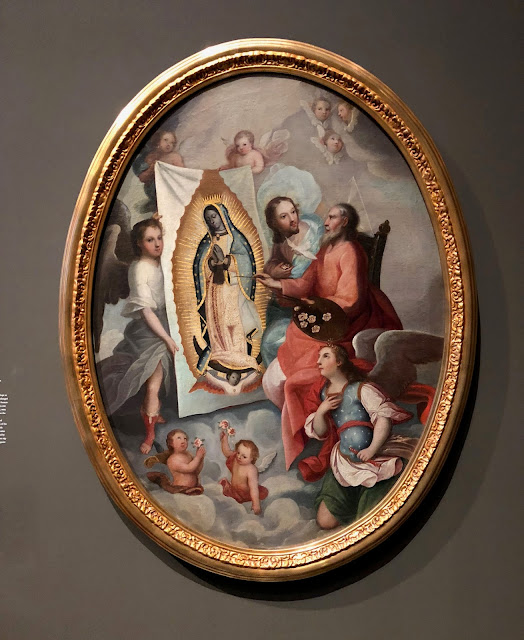 Also on view is an anonymous, widely reproduced painting of God the Father Painting the Virgin of Guadalupe (c. 1750-1800). In defiance of the Pope, the artist shows God himself painting the Guadalupe, as Jesus and the Holy Ghost kibbitz. 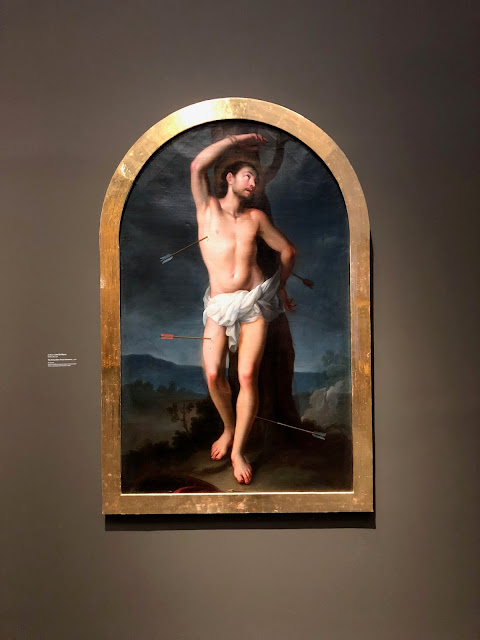 The 18th century also saw the establishment of art academies in Mexico. They offered posing from live models, leading to the new level of anatomical accuracy achieved in a c. 1740 Saint Sebastian attributed to José de Ibarra. 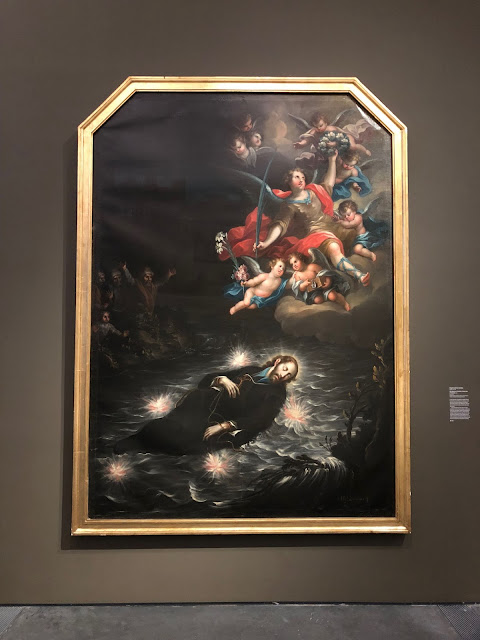 Saint John of Nepomuk was a Bohemian confessor martyred for refusing to violate the privacy agreement of the confessional. He took on an outsized influence in far-away Mexico, as seen in a large painting of The Discovery of the Body of Saint John of Nepomuk, 1793, by Miguel Jerónimo Zendejas, an exponent of the regional school of Puebla. John of Nepomuk's body is said to have been discovered in the Moldova River, surrounded by five miraculous flames. 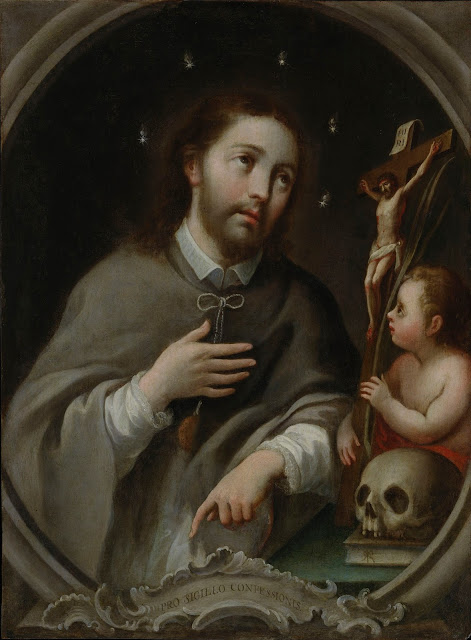 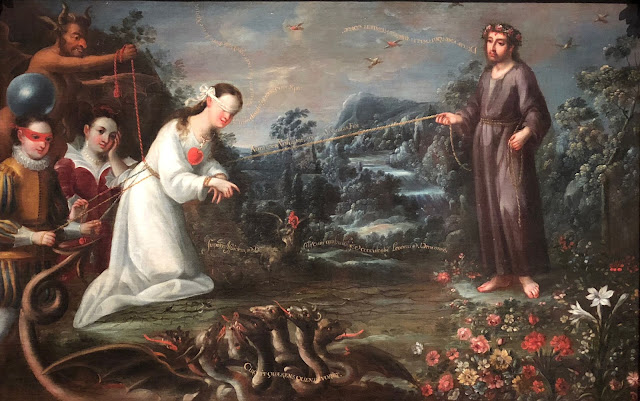 Many of the works illustrate complicated stories or allegories. Even their original audiences found painted captions helpful. Here is The Soul Guided by Christ, 1732, by Francisco Martínez. The masked guy with a bubble on his head represents earthly vanity. 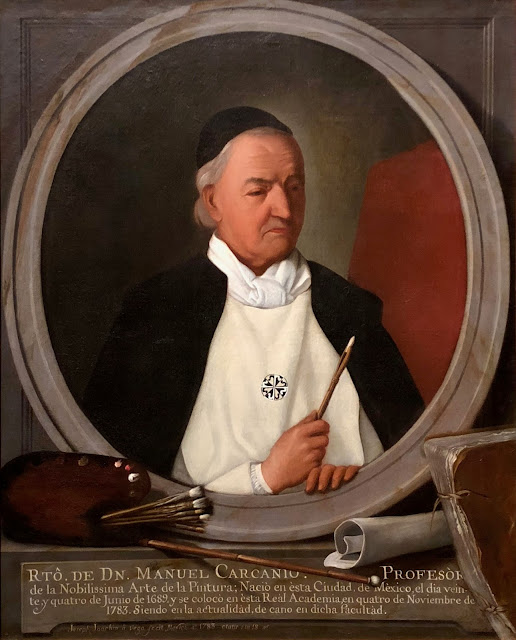 Towards the end of the century Mexican artists were able to blend Mexicanism with Europe's neoclassical avant-garde. José Joaquín de la Vega's Portrait of Don Manuel Carcanio (1783) presents an older artist as dean of "the noble art of painting." It appears that Vega made the squint-eyed sitter look older than he was, in an attempt to invent a history that hadn't quite happened yet. 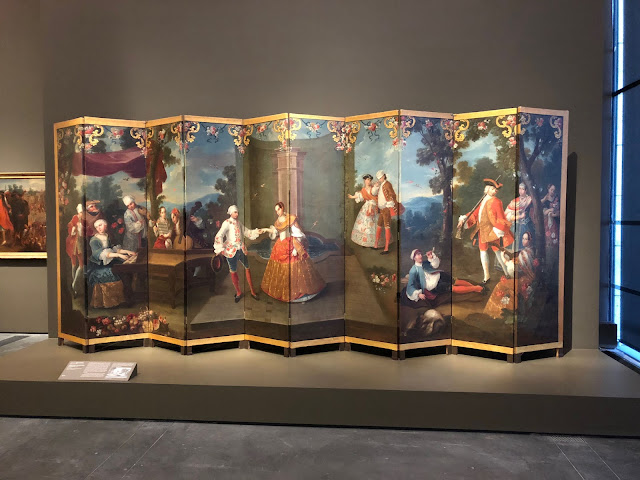 A group of paintings show the new subject of everyday life in Mexico. That life is hybrid, literally in the Casta paintings and more subtly in a folding screen attributed to Cabrera. It's a Fête Galante (c. 1760) based on a print by the French classicist printmaker Bernard Picart. But the French figures have been transformed into Mexican and Spanish types, and the couple step to a Mexican dance. 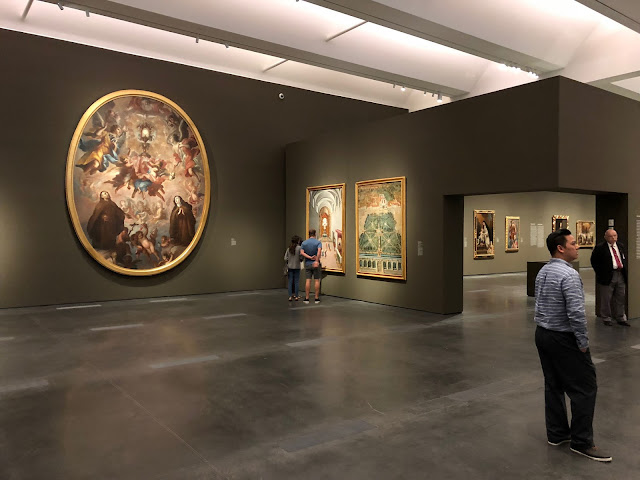