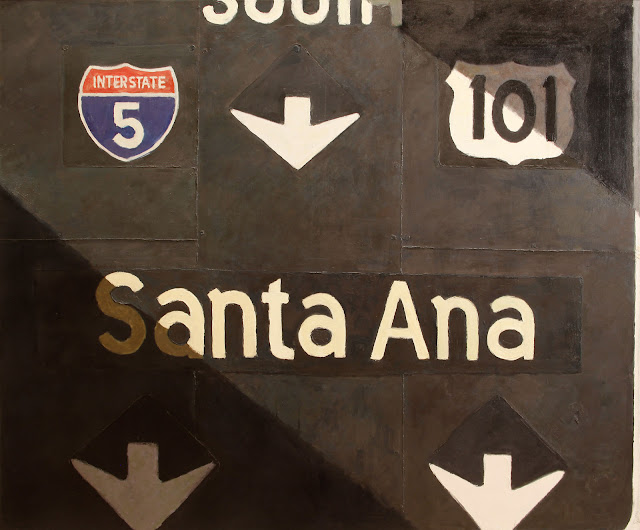 UC Irvine has announced it will be home to the 3200-piece collection of California modernism assembled by Newport Beach real estate developer Gerald Buck. Buck died in 2013, leaving the fate of his collection a mystery. At top is Roger Kuntz' Santa Ana Arrows.

The Orange County Register reports that Buck had intended to donate the collection to the Huntington. Then art historian Johnathan Fineberg talked him out of it. "I think you'll be making a mistake giving this to the Huntington Library," Fineberg says he told Buck. "The five most famous will end in a gallery and the rest will end up in a basement."

I wouldn't take that literally. The Buck collection has scores of quintessential works by big names of California art: Agnes Pelton, Henrietta Shore, Oskar Fischinger, Knud Merrild, Helen Lundeberg, Lorser Feitelsen, Ruth Asawa, Richard Diebenkorn, Sam Francis, Wallace Berman, Bruce Conner, Joan Brown, David Park, Robert Irwin, Helen Pashgian, Larry Bell, Wayne Thiebaud, Carlos Almaraz, Ed Ruscha, and John Baldessari. Though few have seen the collection as a whole, the Buck Collection credit is familiar to anyone who reads exhibition labels.
Just last year it was announced that Joan Irvine's 1200-work collection of California Impressionism was coming to UCI, contingent on construction of a new museum. At the time I was skeptical of how they'd get a "world-class museum" from California Impressionism alone. The good news is that they're not building two museums. The Irvine and the Buck collections will be housed in the same building, to be called the UCI Museum and Institute for California Art. They ought to fit seamlessly. Irvine bought some of her plein air paintings from Buck, after he decided to concentrate on modernism. Together the collections will span California art from about 1890 to nearly the present.
See also: A Modest Proposal: Move Pereira LACMA to Irvine.
Email Post
Labels: Gerald Buck UC Irvine UCI Museum and Institute for California Art