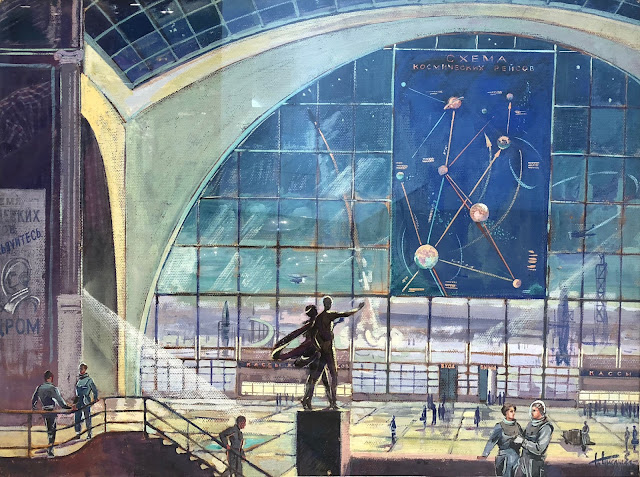 "Cold War Spaces" opens the Wende Museum's new home in the Culver City Armory. It's partly about the space race but mainly a sampling menu of the Wende's multifarious collection, slotted under free-associated headings such as public space, work space, and secret space. 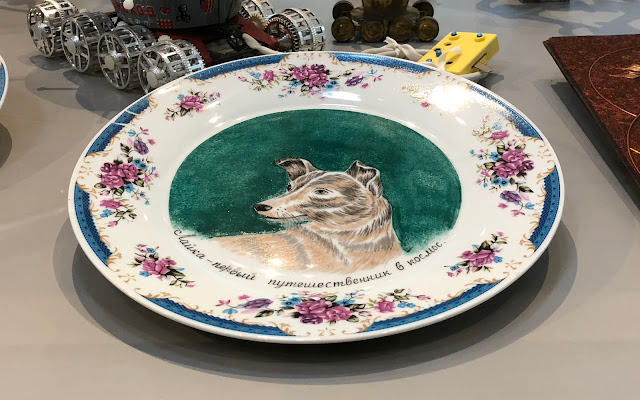 And outer space. Sputnik became a pop culture phenomenon, as did the unfortunate dogs tapped to become the first cosmonauts. Laika (a Moscow stray who did not come back from her trip to the stars) achieved an afterlife in commemorative porcelain. 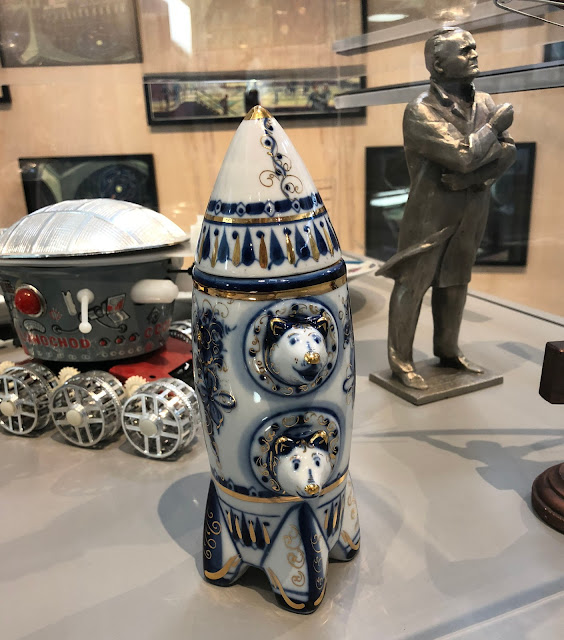 Belka and Strelka were the first space dogs to survive their mission. A porcelain rocket has the pair happily poking their heads out the windows. (By the way, you can see M.A. Peers' contemporary paintings of these and other space dogs at the nearby Museum of Jurassic Technology.)

After her 1960 mission, Strelka gave birth (all space dogs were female). Kruschev gifted one of the pups to Caroline Kennedy… whose dad launched the race to the moon.

The notion of a space race predates JFK. At top of the post is a Georgi Lukaschevich conceptual painting for the 1959 Soviet science-fiction film The Sky Calls. The plot envisions a Soviet-US race to Mars. Villainously incompetent Americans screw up and have to be rescued by their USSR rivals. Despite the tensions of the time, American B-movie maven Jack Harris managed to secure rights to the film. He hired Francis Ford Coppola, then a UCLA film student, to recut it for the U.S. market. Coppola's cut was released in 1962 as Battle Beyond the Sun. Coppola renamed the rival nations ("North Hemis" and "South Hemis") and used matting to erase the Cyrillic lettering and USSR signage. 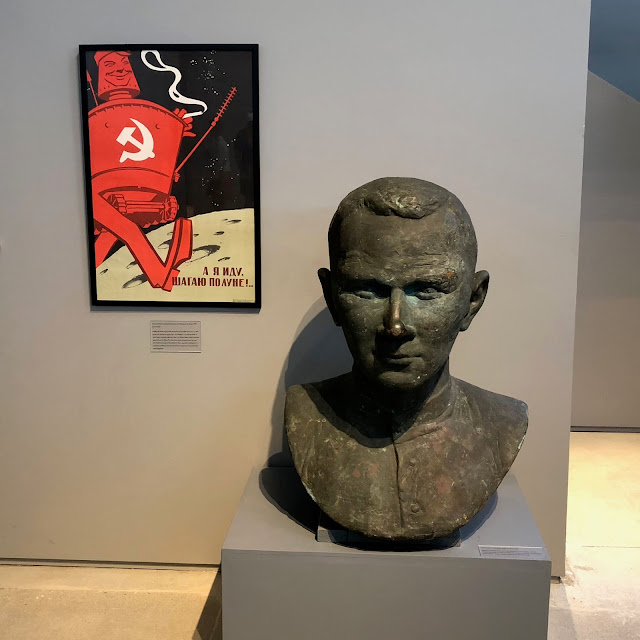 Meanwhile the space dogs' success led to the first man in space, Yuri Gagarin. After his 1961 mission Gagarin became a secular saint, represented by a larger-than-life bronze bust at the exhibition's entrance.

It's shown next to a poster created in 1970, the year after America's moon landing. Veniamin Markovich Briskin and Valentin Viktorov I Am Walking on the Moon! defuses the U.S. success through humor. A grinning Soviet robot smokes a cigarette on the moon. 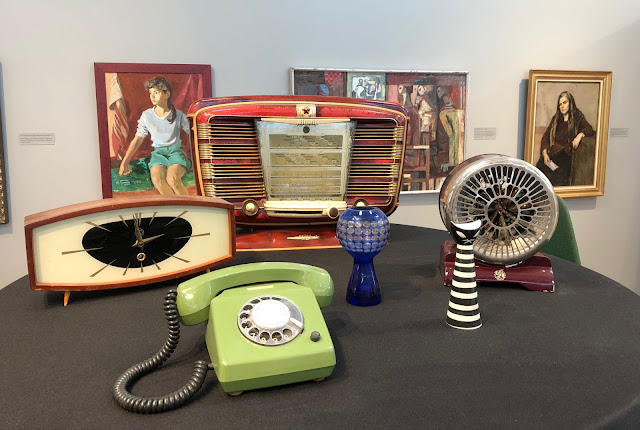 The space age informed Soviet Bloc design of consumer products. Many of the objects on view invite comparison to mid-century California, another center of the aerospace industry. 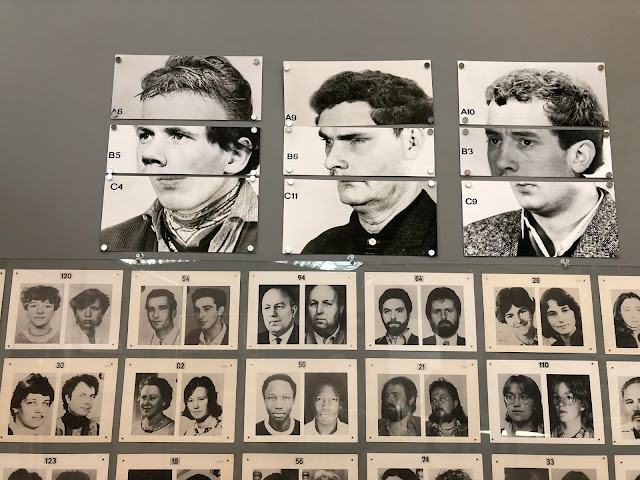 "Border Spaces" resonates as America contemplates building its own wall. Berlin Wall guards were trained in extreme vetting. Testing materials required guards to decide whether paired images represented the same person. Like much of the collection, it is non-art that weirdly resembles contemporary art. 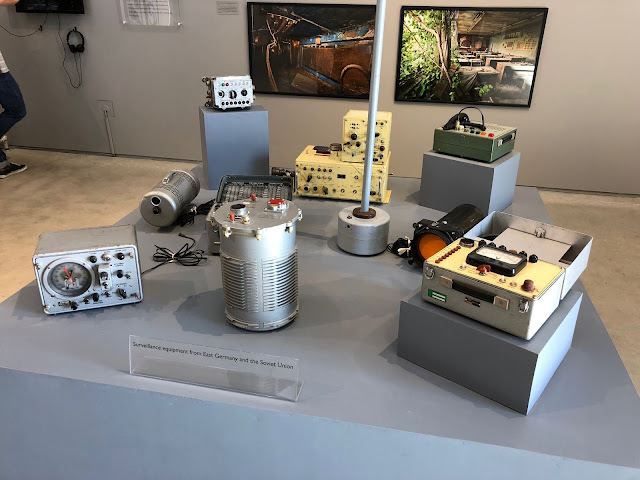 "Secret Spaces" includes this still-life of secret police tradecraft. Telephones were rare throughout the Cold War era, often limited to one rotary-dial landline per apartment building. It was relatively easy for agents to eavesdrop on the limited volume of phone calls. Today the volume of communications has grown exponentially, but algorithms do the eavesdropping, raising the question: Are we more surveilled than East Germans once were? 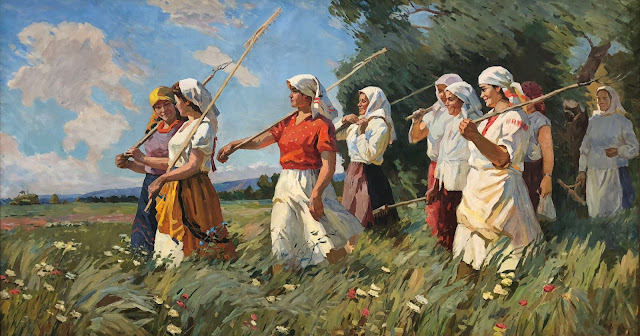 The Wende's painting collection is distinguished by its otherness. It mostly defies connections to the art history that Westerners consider significant. Many Socialist Realist paintings, such as In the Meadows (1967) by P.V. Alexeev and B.I. Kaloev, draw on French painting of the previous century. While French realism favored downtrodden workers, Socialist Realism turns the frowns upside-down. Happy workers clock in for a new workday of boundless quotas. 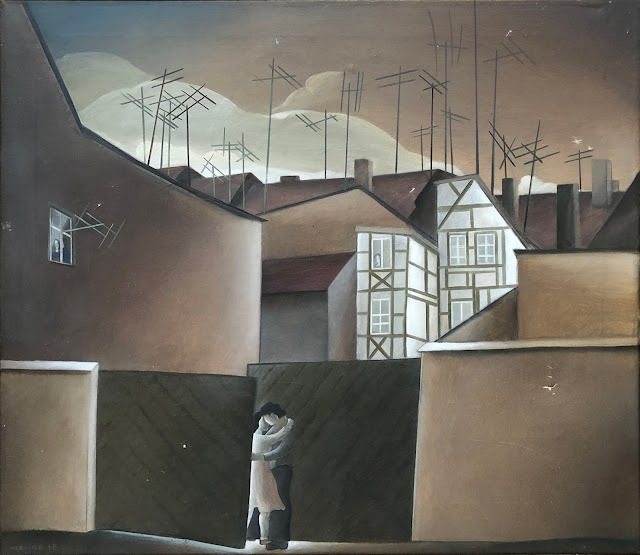 By the 1970s some artists found more ambiguity in utopia. Lothar Gericke's Cityscape with Love Couple (1978) has parallels in American Precisionism, George Tooker, and even Norman Rockwell. 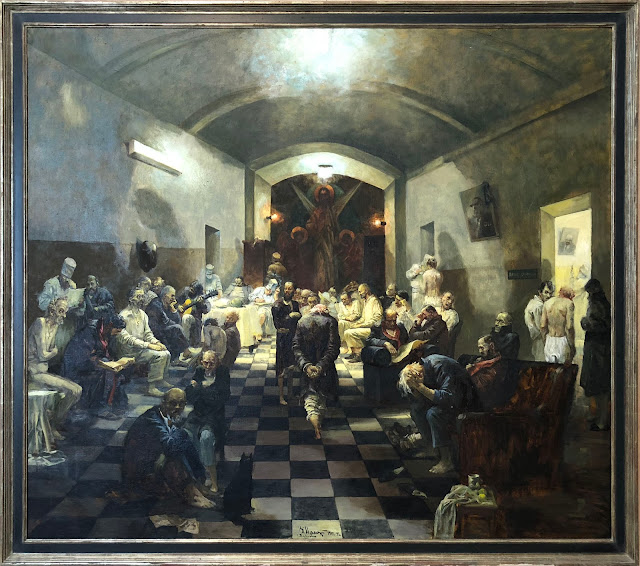 Stanislav Molodykh's The Asylum (1982) is Goya-inspired gulag. Molodykh voluntarily checked in to a mental hospital for treatment of his alcoholism. There he found a motley group of political prisoners, who were perfectly sane, and others who were not. The faces are amazing, worthy of close inspection. Many pairs of eyes confront/implicate the viewer. The Asylum was recently donated by the Abby J. and Alan D. Levy Family. 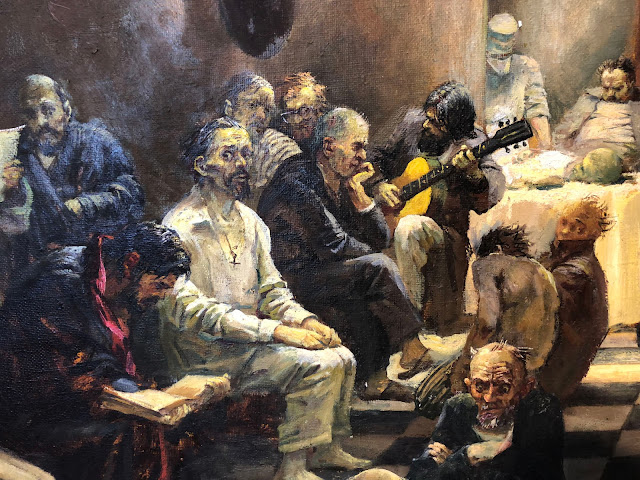 P.S. Since last month's post the Wende has installed its open storage spaces. Below is a Stalin bust among depictions of the worker; toys; ceramics and glassware. 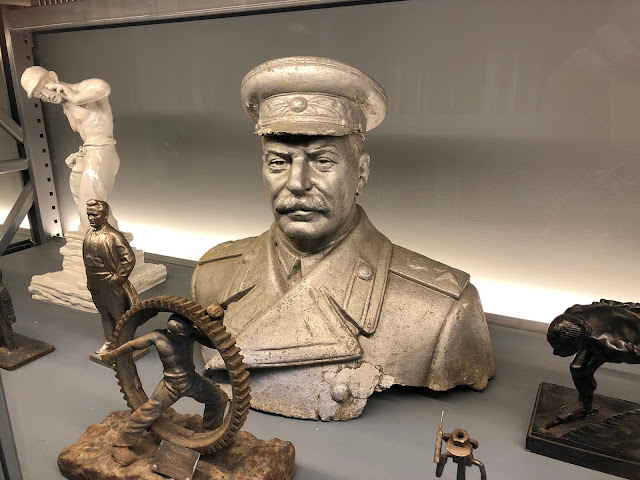 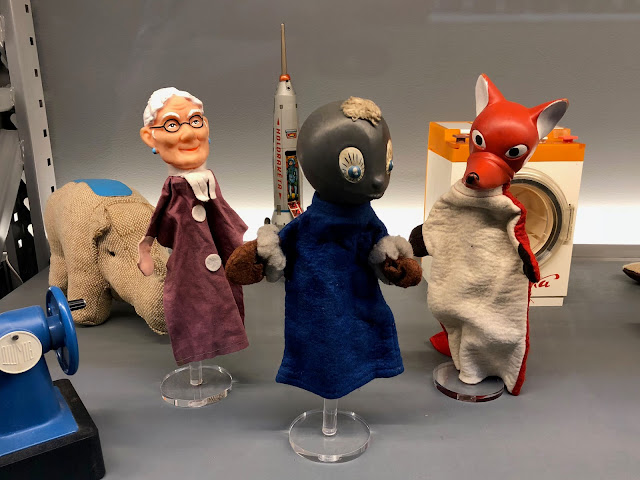 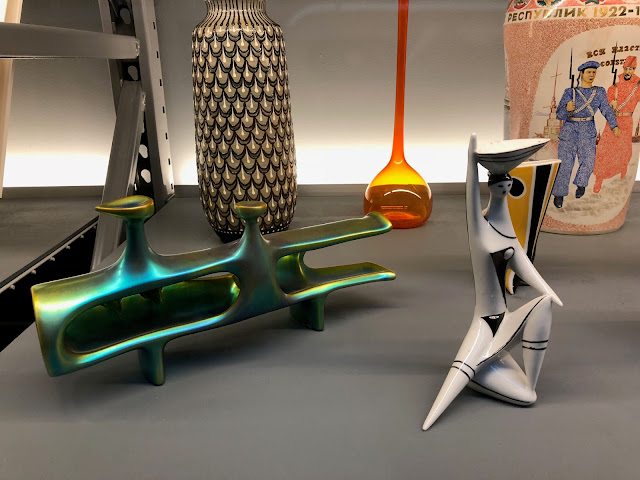 The Wende's evolving sculpture garden now has walkways and seating. 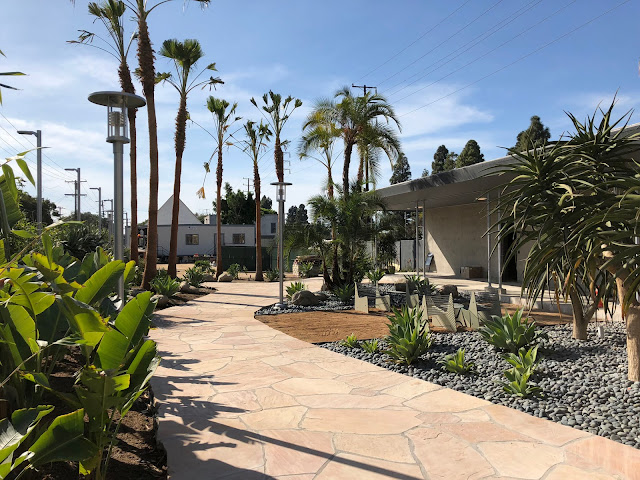 The Wende's new logo is handsomer than many a larger museum's. 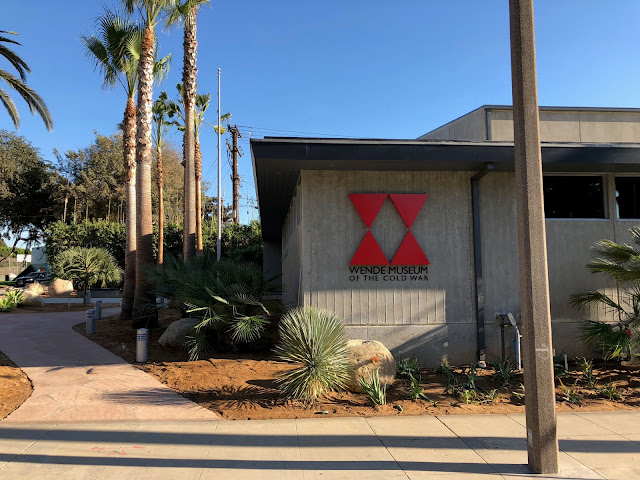 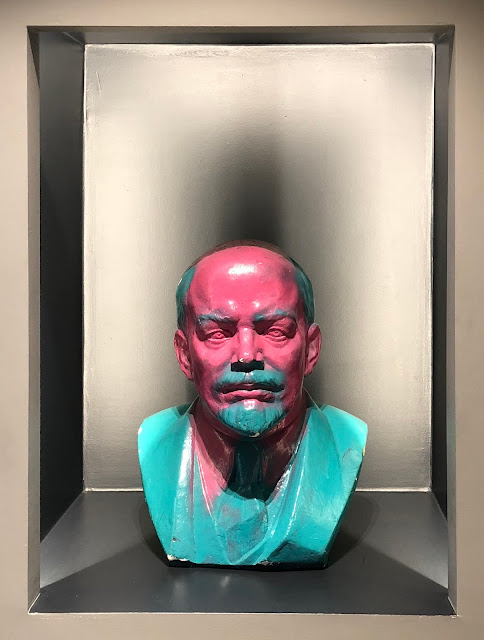