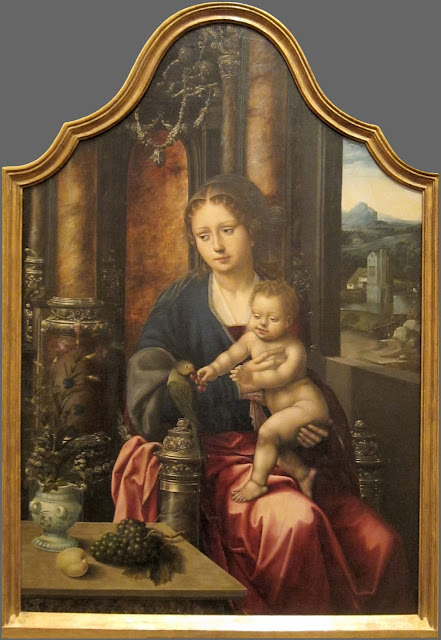 The anonymous Renaissance painter known as Master of the Parrot, named for a Madonna and Child in the San Diego Museum of Art (above), has been identified as Cornelis Bazelaere. That signature appears on a similar painting that was recently auctioned in Paris. Bazelaere is listed as a master in the Antwerp guild in 1523, confirming that this "Antwerp Mannerist" was indeed from that city.

The unsigned San Diego painting was a gift of reclusive sisters Amy and Anne Putnam, in their day the most discerning collectors of European art on the West Coast.

Why a parrot? Bazelaere included parrots in a number of paintings, but he wasn't the first. There's a parrot in Jan van Eyck's Virgin and Child with Canon Joris van der Paele (1434-36; detail below), which must be 90 years earlier. The San Diego parrot is the same green and red-necked species and is posed similarly.  Scholars theorize that van Eyck used the parrot as a symbol of Mary's virginity, the Immaculate Conception, or (appropriately for a talking bird) the Word. In the Renaissance parrots' vocalizations were heard as "Ave," as in "Ave Maria." 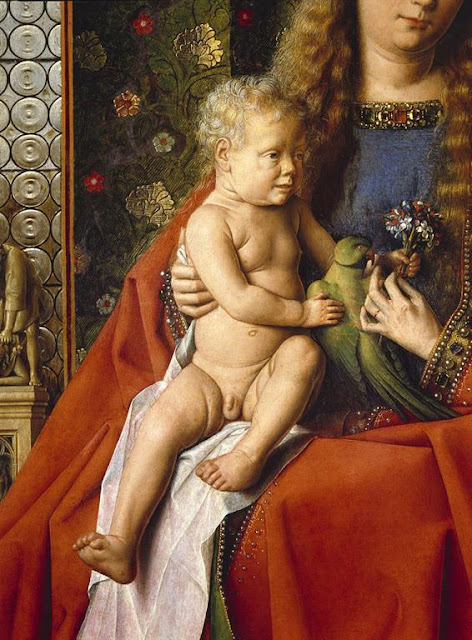