The Uncanny Valley of Chinese Stones

LACMA's Resnick Pavilion is fully installed this holiday season, offering a vision of what a 21st-century encylopedic museum can be. Its exhibitions span a 1539-40 Persian carpet and a brand-new Mark Bradford mural, 150 Portrait Tone. Shows on 18th-century Mexican painting and 20th-century design in California and Mexico will be touchstones for future scholarship. Only a survey of Chagall's stage designs might be accused of being crowd-pleasingly familiar.

Newly opened is "Wu Bin: Ten Views of a Lingbi Stone." The Chinese literati prized certain stones for their weirdness of form. "Wu Bin" is a focus exhibition built around the extraordinary scroll known as Ten Views of a Lingbi Stone, 1610. Ming painter Wu Bin meticulously records the appearance of a stone owned by calligrapher Mi Wanzhong (who supplied the scroll's text and calligraphy). 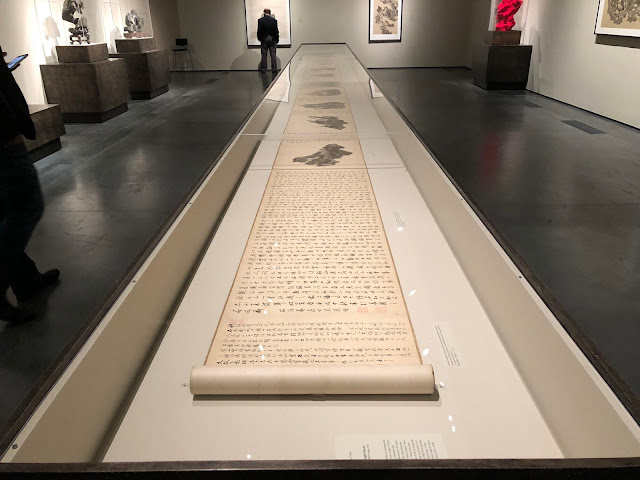 The rule of thumb was that a spirit stone must look good from at least four angles. Wu Bin's scroll supplies ten views of the same rock. You do not have to know anything about Chinese painting to appreciate them as haunting abstractions. If you must, relate them to fractals, virtual reality, whatever.

The stone in question was taller than a man and is not here. LACMA curator Stephen Little has taken the opportunity to debut the venerable Taihu Stone acquired earlier this year. 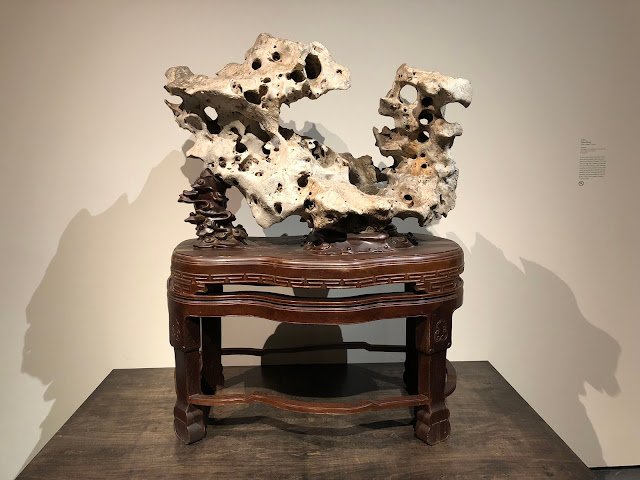 But mainly the show is about simulacra of stones, in 2- and 3D. There are faux stones in purple sandalwood or zitan (unknown maker, 18th century); stainless steel (Zhan Wang's Artificial Rock No. 135, 2007); red plastic foam (Sun Wentao's Scholar's Stone, 2009). 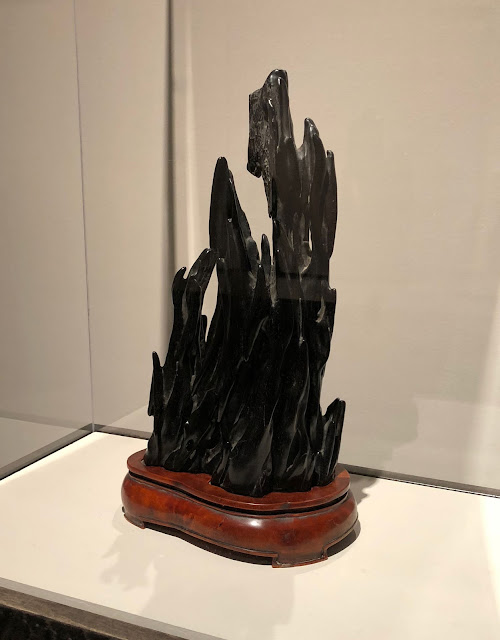 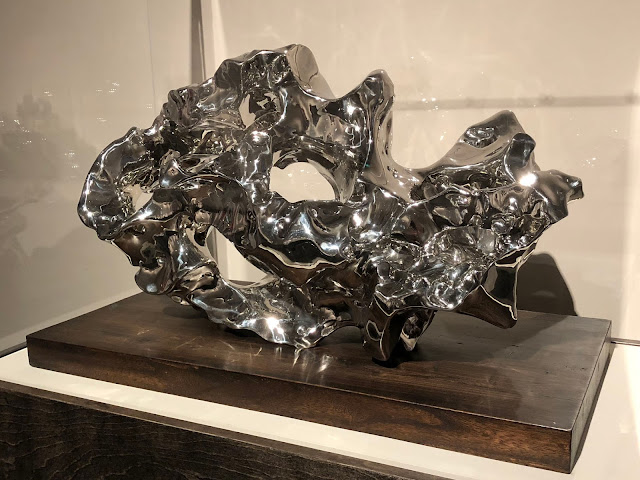 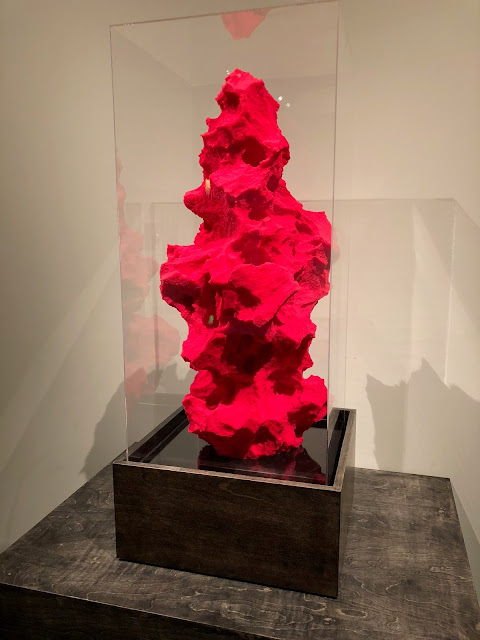 Spirit stones are natural things selected for their uncanny resemblance to other things. Representations of spirit stones double-down on the paradox. "Art" shares a root with "artifice" and "artificial." 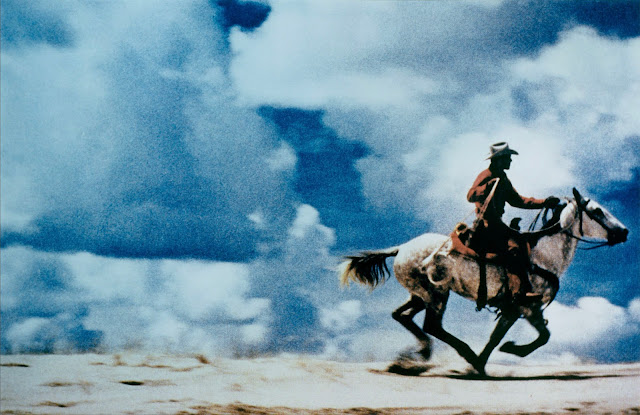 In a way, "Wu Bin" rhymes with another newly opened LACMA show, "Richard Prince: Untitled (Cowboy)" in BCAM. Prince came to fame in the late 1980s for (re)photographing "Marlboro Man" cigarette ads. He cropped the ad copy, scaled the images up to gallery size, and presented them as art. The original ad campaign's photographers sued, resulting in a settlement and much discussion of the ethics of appropriation.

A gallery video traces the complicated story. The Marlboro campaign had been inspired by Leonard McCombe's 1949 Life magazine photoessay of Texas cowboy Clarence Hailey Long. Ad execs hired illustrator Robert Peak to adapt McCombe's vision into drawings and paintings (one below, shown here) and then hired a team of photographers to shoot photos based on McCombe's conceptuals. Nobody was an "original," unless maybe it was cowboy Long. The Chinese tradition understands appropriation as a given. Art succeeds by revealing the strangeness of something familiar (pretty much what Prince did). Western thought more often sees the artist as a maverick, cowboy proprietor of an intellectual property brand. 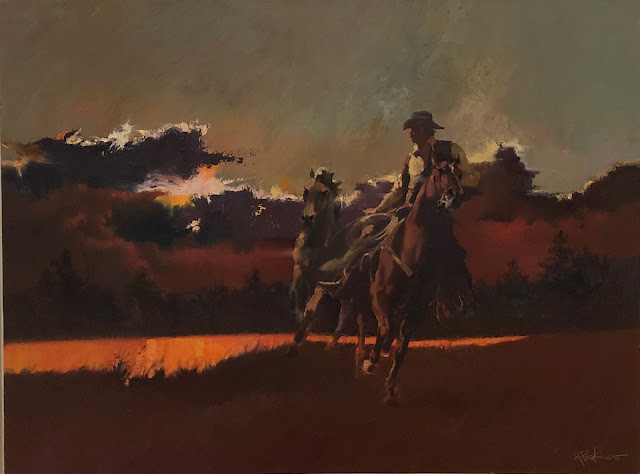 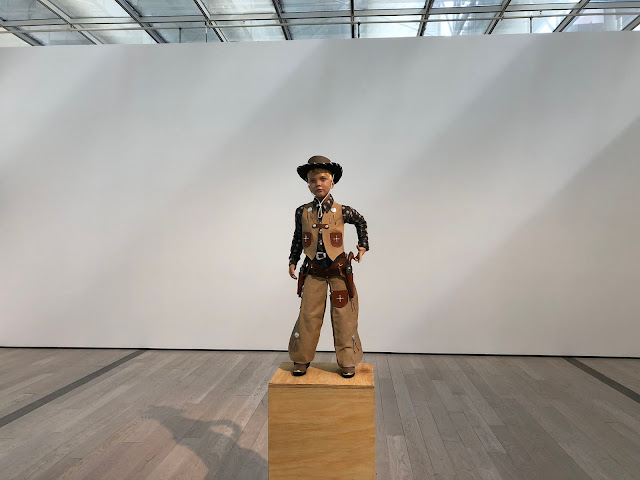