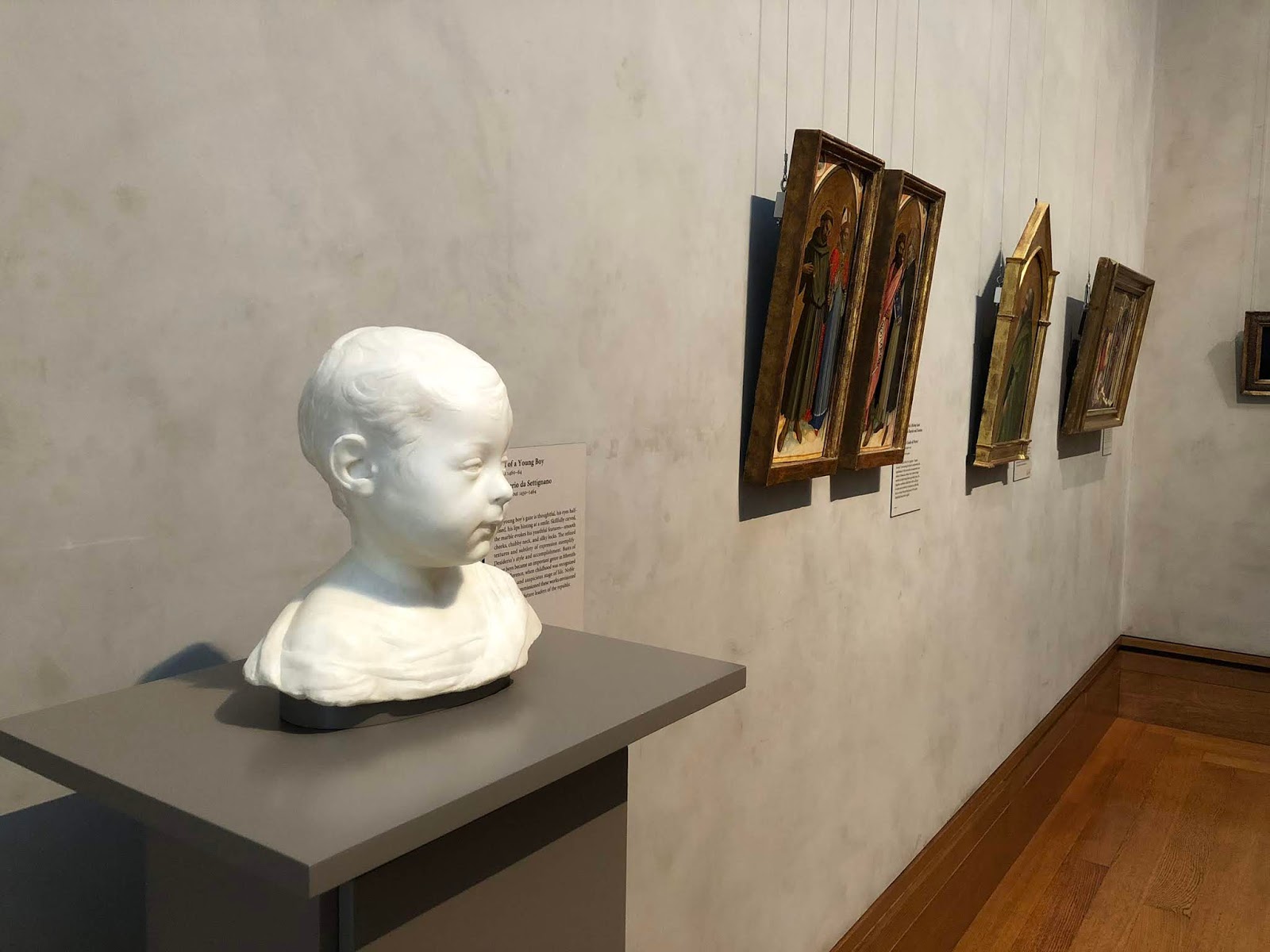 The Getty Museum has put on view its recently acquired Bust of a Young Boy (1460-64) by Desiderio da Settagnano. The Florentine sculptor pioneered toddler portraits, a Renaissance invention still popular on social media. Only four of Desiderio's disarmingly real marble busts of children survive, all of boys. The Getty bought the last in private hands, from the Paris gallery Brimo de Laroussilhe.
Ancient Rome produced bust portraits of children as miniature citizens, grave and stoic. Desiderio's innovation was kids being kids. In an age when marble busts celebrated holy figures or great men, Desiderio's meticulously observed child portraits must have been almost subversive, like Diane Arbus' baby head-shots. (Arbus' closed-eye and sometimes drooling sitter, son of socialite Gloria Vanderbilt, grew up to be CNN anchor Anderson Cooper.)
By far the best-known of the four Desiderio busts is the Laughing Boy in Vienna. Two others are in Washington's National Gallery of Art, sold by Duveen to collectors Andrew Mellon and Samuel Kress.

The Washington busts were once attributed to Donatello, greatest of early Renaissance sculptors and smartest of Mutant Ninja Turtles. Donatello was the catch-all attribution for early Florentine sculptures of quality. Desiderio's marble-carving skills arguably exceeded Donatello's. But his artistic personality, along with that of contemporaries Antonio Rossellino, Mino da Fiesole, and Andrea del Verrocchio, was submerged until the rise of modern art history.

The Getty Young Boy once had an even more eyebrow-raising attribution. In 1989 scholar Alessandro Parronchi assigned it to Leonardo da Vinci. It's recorded that Leonardo admired Desiderio's "sweetness" and disdain for conventional finish. Desiderio sometimes left chisel marks visible, foreshadowing Leonardo's painterly sfumato. But Parronchi's attribution got no traction.

There has been debate over whether Desiderio's toddlers are true portraits or holy images based on child models. Renaissance theologians advocated displaying likenesses of the young Christ and John the Baptist in homes, to inspire children to behave. Washington's Kress bust is tentatively identified as The Christ Child (?), and the Mellon sculpture has a hole drilled in the neck, evidently for attaching a halo. It's not known when the hole was drilled, and it could have been long after the sculpture's creation. But the Laughing Boy in Vienna is no saint, and the pensive (pouty?) Getty bust probably isn't either. Both are believed to be later than the Washington marbles.

Many scholars believe that Desiderio and his generation of sculptors began using soft media (wax or terracotta) in preparation for marble carving, allowing them to achieve an unprecedented realism. No 3D studies for Desiderio's child busts are known. But terracotta was an important medium for Donatello, and wax studies became common a few decades afterward.

Drawings played a parallel role in advancing the naturalism of Renaissance painting. In 1988 George Goldner, then the Getty's drawing curator, identified a two-sided drawing as by Desiderio. This was a bold claim. Though Vasari boasted of possessing "certain very beautiful pen drawings by Desiderio," no such drawings were known to survive. Goldner's drawing is related to Desiderio's Foulc Madonna, a relief in Philadelphia.

Goldner bought the drawing for the Getty, for $349,000. His successor, Nicholas Turner, branded it a fake. Turner believed it was by the notorious 20th-century forger Eric Hebborn. This blew up into a bizarre scandal involving professional reputations and sexual harassment accusations. Now that the dust has settled, opinion has sided with Goldner. The Getty website now identifies the drawing as by Desiderio "or workshop."

Study twice, carve once. That may have a lot to do with the triumph of Renaissance realism.
Email Post
Labels: Anderson Cooper Desiderio da Settignano Diane Arbus Donatello Getty Museum Leonardo