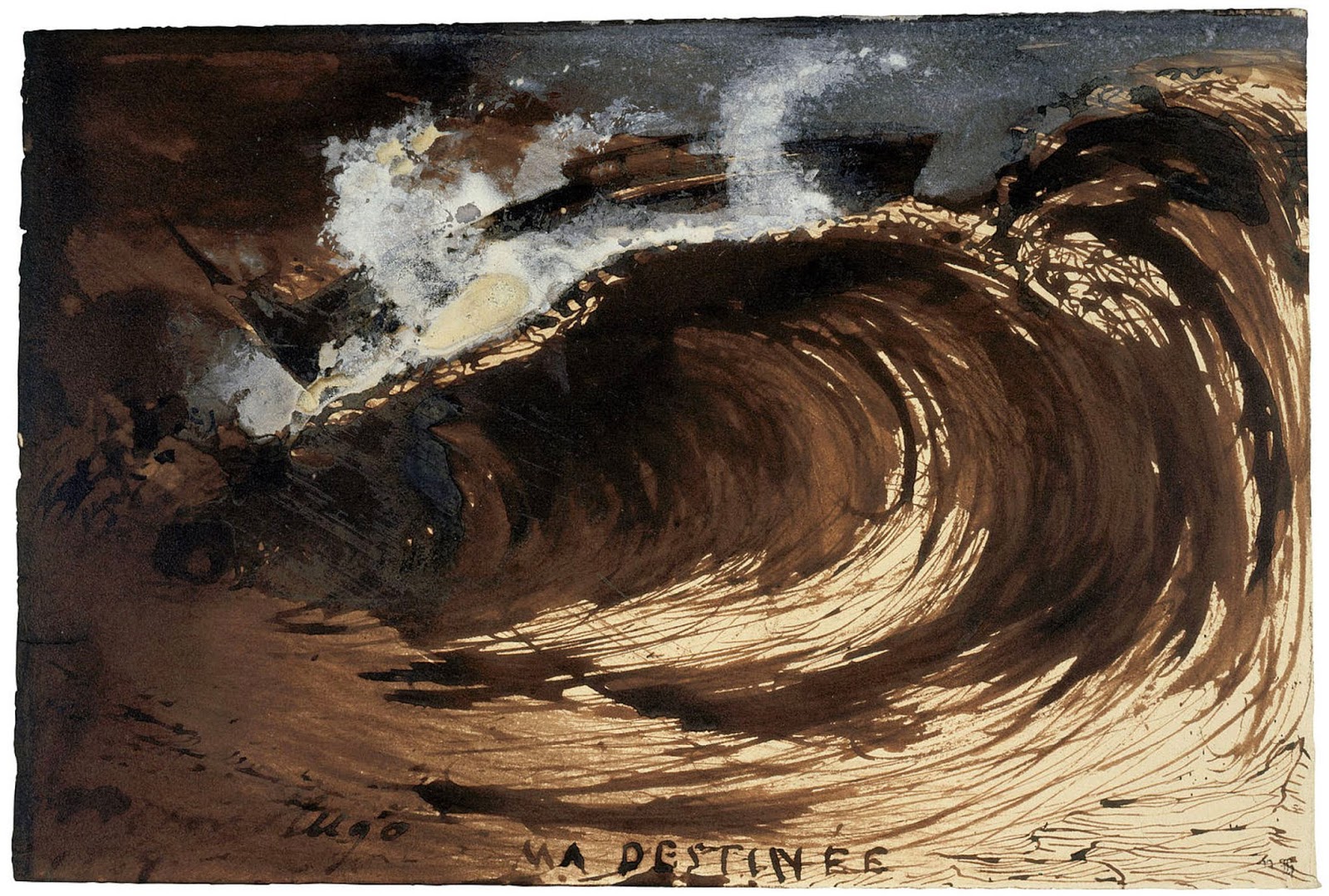 Two of this fall's most provocative shows survey distinctly uncanonical moderns: Hilma af Klint at the Guggenheim and Victor Hugo at the Hammer. Though neither artist came anywhere near Los Angeles, their current regard is largely due to L.A. curators. Maurice Tuchman first presented af Klint's art to American audiences at LACMA in 1986. Ann Philbin oversaw the first Hugo show, at the Drawing Center, New York, in 1998. Now she's at the Hammer, and "Stones to Stains: The Drawings of Victor Hugo" (curated by  Cynthia Burlingham and Allegra Pesenti), is a reprise of sorts, presenting the visual art of the author of The Hunchback of Notre Dame and Les Miserables. Hugo created thousands of super-experimental drawings, at once Romantic and "modern." They were shown only privately in Hugo's lifetime. (Above, My Destiny, 1867.) 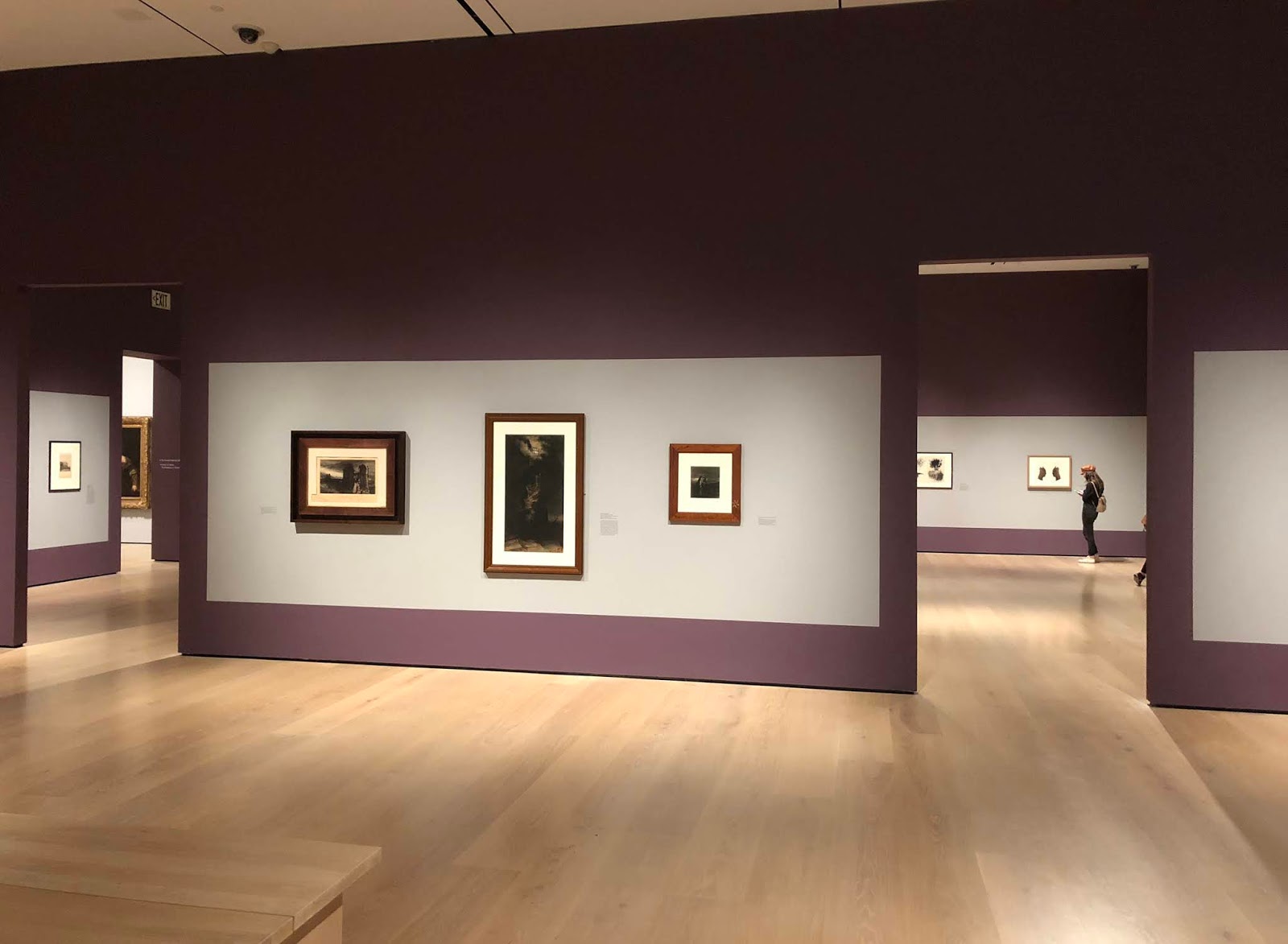 Hugo's drawings are Rorschach blots—figuratively and sometimes almost literally. With hindsight it's tempting to read them as precursors to Odilon Redon's weirdo-noir; Surrealist automatic drawing; Rorschach blots (and Warhol's Rorschach paintings); Merrild's and Pollock's drips; Jess' collages; Ruscha's stains. But in fact outliers like Hugo and af Klint demonstrate how art history resists being packed into neat, linear narratives. Hugo had (invented) his own predecessors. There's a lot of Alexander Cozens, a dash of Rimpa school.
Like af Klint, Hugo came to abstraction the old fashioned  way—through spiritualism. Hugo's daughter Léopoldine drowned in the Seine in 1843. The author was so devastated that he was unable to write for several years. He became an enthusiast of the talking board (what Parker Brothers later trademarked as the Ouija board). Through this means Hugo believed he had contacted not only Léopoldine but Moses, Jesus, Dante, Galileo, Voltaire, and "Death." Hugo made the experiment of replacing a leg of his planchette with a pencil, so it would trace an automatic drawing on paper.
In the late 1850s a parlor game called "Blotto" became popular. Players made random ink blots on paper and tried to interpret them, as with tea leaves. The emergence of Blotto roughly coincides with the beginning of Hugo's self-imposed exile from Napoleon III's kakistocracy. Most of Hugo's drawings were created during his residence on Guernsey island (1855-70). (Incidentally, another Blotto player was the young Hermann Rorschach, later a psychologist. His friends nicknamed him Klecks or "Inkblot.")
Hugo's son Charles described his father's creative process:

"Once paper, pen, and inkwell have been brought to the table, [he] sits down and—without making a preliminary sketch, without any apparent preconception—sets about drawing with an extraordinarily sure hand… little by little, the entire composition will emerge from the blank paper with the precision and clarity of a photographic negative subjected to the chemical preparation that brings out the picture. That done, the draftsman will ask for a cup and will finish off his landscape with a light shower of black coffee. The result is an unexpected and powerful drawing that is often strange, always personal, and recalls the etchings of Rembrandt and Piranesi."
It's said that Hugo made over 4000 drawings. That would be more than double the existing oeuvre of Rembrandt plus Piranesi in this medium. Yet Hugo said he didn't want his drawings to distract from his literary work. Instead he circulated the drawings to an elite group of cultural figures. One drawing of a Hanged Man was translated into a 1861 heliogravure print titled John Brown, after the American abolitionist, executed by hanging in 1859. The John Brown print apparently achieved circulation on both sides of the Atlantic. The Hammer acquired the example of the print shown here.

Sometimes Hugo drew while looking away from the page, a gimmick later adopted by Rodin. He did stains of soot, coal dust, and coffee grounds, like Ruscha. He allegedly used his own blood—the blood of the poet he was—as in the Eleanor Antin Blood of a Poet Box.
Delacroix was among those who knew of Hugo's art. He said that Hugo might have been one the greatest artists of the century, had he chosen to apply himself to visual art. Van Gogh admired Hugo's drawings, and André Breton collected them.

In terms of influence, the most intriguing work in the Hammer show may be the one owned by Picasso. It's an inky abstraction with an aleatoric devil's head. It's not much like a Picasso, even allowing that the "devil" anticipates a minotaur. Still, it shows how one generation's art becomes the jumping-off point for another's.