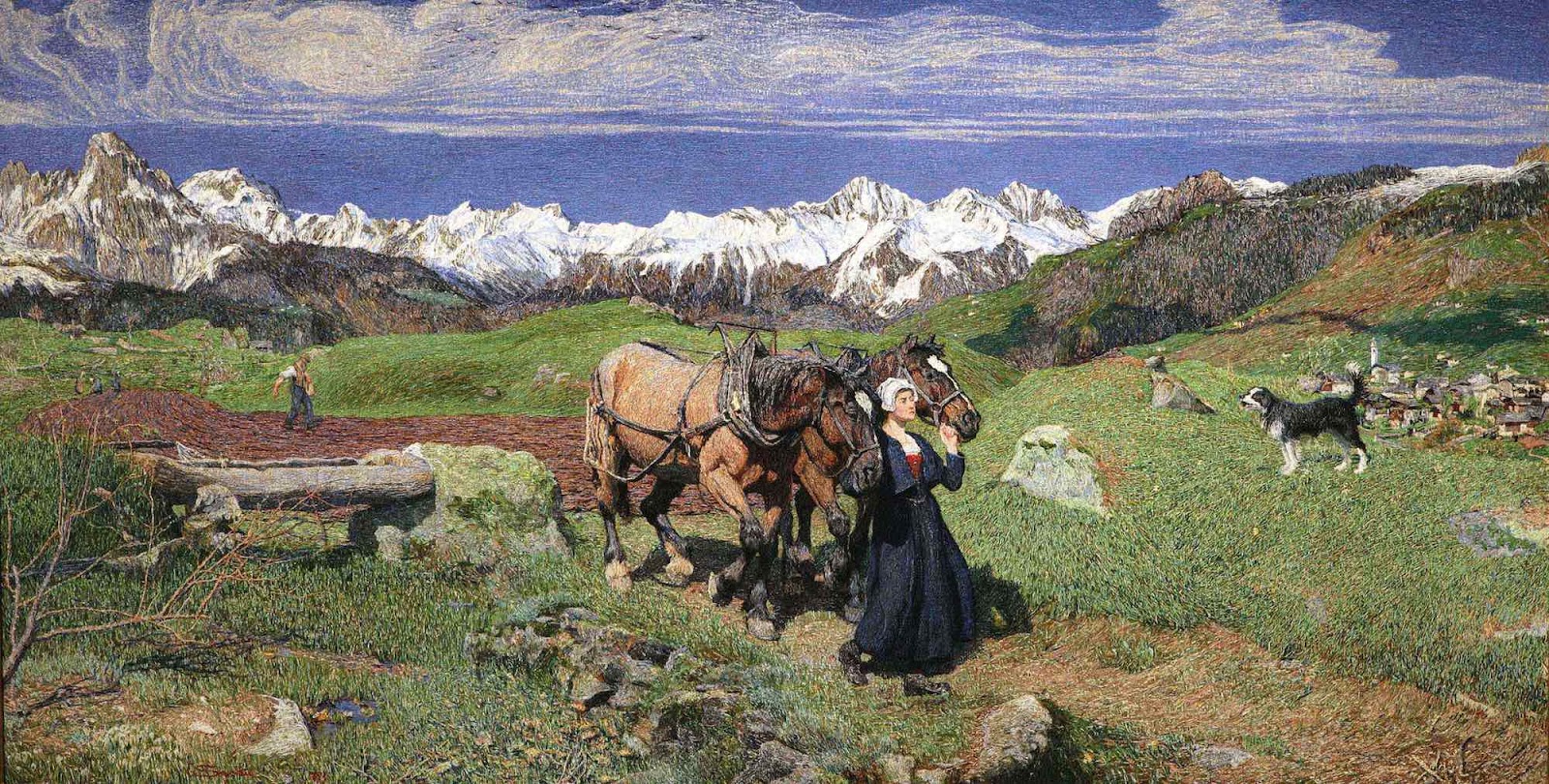 The Getty Museum continues a string of recent painting acquisitions with Giovanni Segantini's Spring in the Alps (1897). The large (4 by 7.5 feet) picture, in its artist-designed frame, is to go on view Feb. 12.

Marsden Hartley adored Segantini as "the only artist who has ever put a mountain spirit on canvas." But for most Americans the Italian nineteenth century—the Ottocento—is terra incognito. The period has experienced a revival of scholarship lately, investigating the cosmopolitan (not all French) universe of early modernism.

Like Seurat, Segantini drew on optical theories asserting that colors are most brilliant when not mixed. Both put this into practice about 1886 (Seurat with Grande Jatte, Segantini with Ave Maria a Trasbordo). Seurat painted dots (Pointillism); Segantini did lines (Divisionism). It's unlikely either artist ever saw the other's work; and both died young.

In large works like Spring in the Alps Segantini achieved an airless hyperrealism. The Divisionist technique, which came to associated with fin-de-siecle angst and democratic socialism, revived Italian art. Most of the Futurists began in this style.

By the 1890s Segantini was famous. European museums vied for his paintings. American collector Jacob Stern, nephew of Levi Strauss and soon-to-be lord of a denim empire, sought a trophy for his San Francisco home. He commissioned Spring in the Alps from Segantini via ex-pat American artist Toby Rosenthal (who painted a kooky, evil-monk potboiler now at LACMA). Spring in the Alps was so famous that its survival of the 1906 earthquake was reported as news. After Stern's death, it was on loan to SF's Legion of Honor for literally a lifetime (1928–1999).

During that lifetime, Segantini's reputation faded to just about zilch outside of Italy and Switzerland. Yet in 1999 Spring in the Alps was auctioned for $9.57 million. That was 36 times Segantini's previous auction record. The buyer was Martin Zimet, owner of the New York gallery French and Co. Zimet said he was buying it for himself. But French and Co. has offered it for sale for much of the past 20 years. At TEFAF 2015 it was shown with a stratospheric asking price of 35 million Euros ($40 million). Compared to that, a $450 million Leonardo seems reasonable.

Spring in the Alps was in the U.K. National Gallery's "Radical Light," a 2008 reappraisal of Divisionism. Painting curator Davide Gasparotto has spoken of doing an Ottocento show for the Getty. Spring joins a large Segantini pastel purchased earlier this year.
Email Post