The Getty Museum is showing Pontormo's Visitation (1528-29). Among its distinctions is that it's the painting behind Tony and Carmela's bed in The Sopranos.

David Chase's dark comedy of Mafioso (American) angst would have us believe that Tony and Carmela commissioned a close-to-life-size replica of a vertical-format Renaissance masterpiece and then hid most of it behind a cheesy headboard. The Sopranos' faux painting is dark, being based on the original before its recent cleaning.
The Sopranos satirizes its characters' notions of Italian classicism and classiness. Tony, Carmela, Johnny Sack, and other characters pay lip service to Italian high culture and religion, while presumably being oblivious to their higher values. Chase said he struggled to avoid cheap shots at his characters' expense. Yet some of the series' best gags, visual and verbal, tweak clichés of criminal-class American "bad taste."

Tony (James Gandolfini) stashes an AK-47 and a hand grenade in a hollowed-out faux Roman column. The misappropriation invites comparison to the postmodern goofs on classical columns of Robert Venturi and Michael Graves.
Carmela (Edie Falco) says of her Lladró porcelain figurine: "I don't even want to tell you how much that cost… $3000." Her notion of art as status symbol is equal parts art fair and Gilded Age. ("I think it's hypocritical to talk about art objects as if they have no commercial value," said J. Paul Getty. "Most people go to look at paintings because they know they're expensive." Getty loved to tell people how much he paid for an iffy Raphael… $200.)

Would Tony and Carmela have known who Pontormo was? Would a suburban NJ decorator have been attuned to The Visitation, a magnificent painting off the tourist grid in Carmignano, Italy? These questions have been debated by Sopranos fans. One theory is that The Visitation was chosen (by the TV show's set designers) to symbolize the Madonna/whore dichotomy of Sopranos thugs.

Pontormo's blue-robed profile figure at left is Mary, the literal Madonna. She confronts Elizabeth, mother of John the Baptist. Both are pregnant, emphasizing women as vessels of patriarchy. The front-facing women behind are understood to be handmaidens, but Pontormo gives them an uncanny resemblance to the main figures. Freud described the uncanny and the Madonna/whore thing, perhaps linking The Visitation to Tony's shrink, Jennifer Melfi.

Carmela is shown to admire Renaissance art in much the way Vasari did, as a sincere expression of Christian piety. This inverts the typical analysis of today's aesthetes, that Pontormo is to be judged for style, not substance—the sum of the squares of how he differs from earlier Renaissance painters. 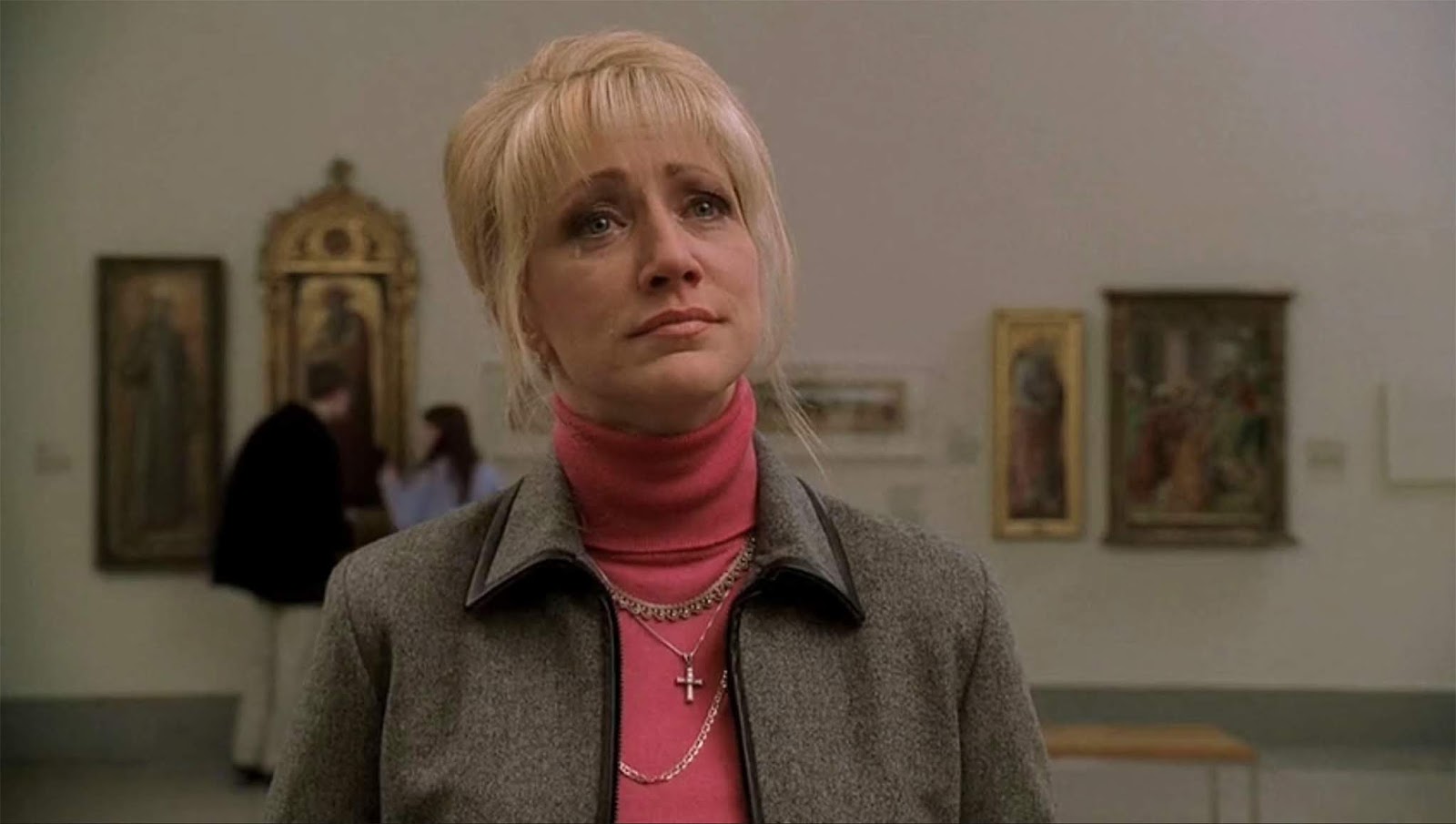 Anonymous said…
When installed, will this be the oldest house in California? On the West Coast?
February 18, 2019 at 7:43 PM

Anonymous said…
I always wondered why the painting was covered by the headboard. Does anyone know, or is it just because they do I think the house itself is tacky and in bad taste. It's like 80's Staten Island. I love that the house has so many expensive things and its so terrible.
April 21, 2020 at 10:18 AM

Hermione said…
Perhaps the painting is covered to show how the deeper meaning of religion is also not accessible to Anthony and Carmela. They pay lip service to the Catholicism in which they were nominally raised--and then go ahead and do whatever they wanted to do in the first place, rationalizing away any discomfort they may have initially felt.

When I first noticed the headboard, I realized that Carmela is so confident of her own taste that she opted not to use a decorator. No decorator would have stuck that painting in that location.
June 13, 2022 at 12:33 PM