Leonardo da Vinci died 500 years ago. Museums on both sides of the Atlantic are commemorating the anniversary. Conspicuously AWOL is Salvator Mundi, the $450 million auction star reportedly purchased for the Louvre Abu Dhabi and more recently rumored to be on a yacht.

Meanwhile, with little fanfare, the Getty Museum has put on view a picture by Leonardo's Northern contemporary, Quentin Metsys. May I suggest it's a better painting?

Oh, sure. Metsys is not famous enough to rate a Mutant Ninja Turtle. But his Christ as the Man of Sorrows, purchased by the Getty last year, demonstrates how spectacular a Renaissance painting can be. Stripped of yellowed varnish, it's intense, cinematic, over the top.
I've not seen the Salvator Mundi. Judging from the press images, it's a painting more to be respected than loved. The condition report is: Don't ask.

Both paintings are rediscoveries. The attribution of Salvator Mundi was an upgrade. It had been thought to be a copy or workshop product (and some Leonardo experts insist it is). Curiously the attribution of the Getty painting is a downgrade. For over a century it had been ascribed to Rogier van der Weyden, the earlier and better known Netherlandish artist. 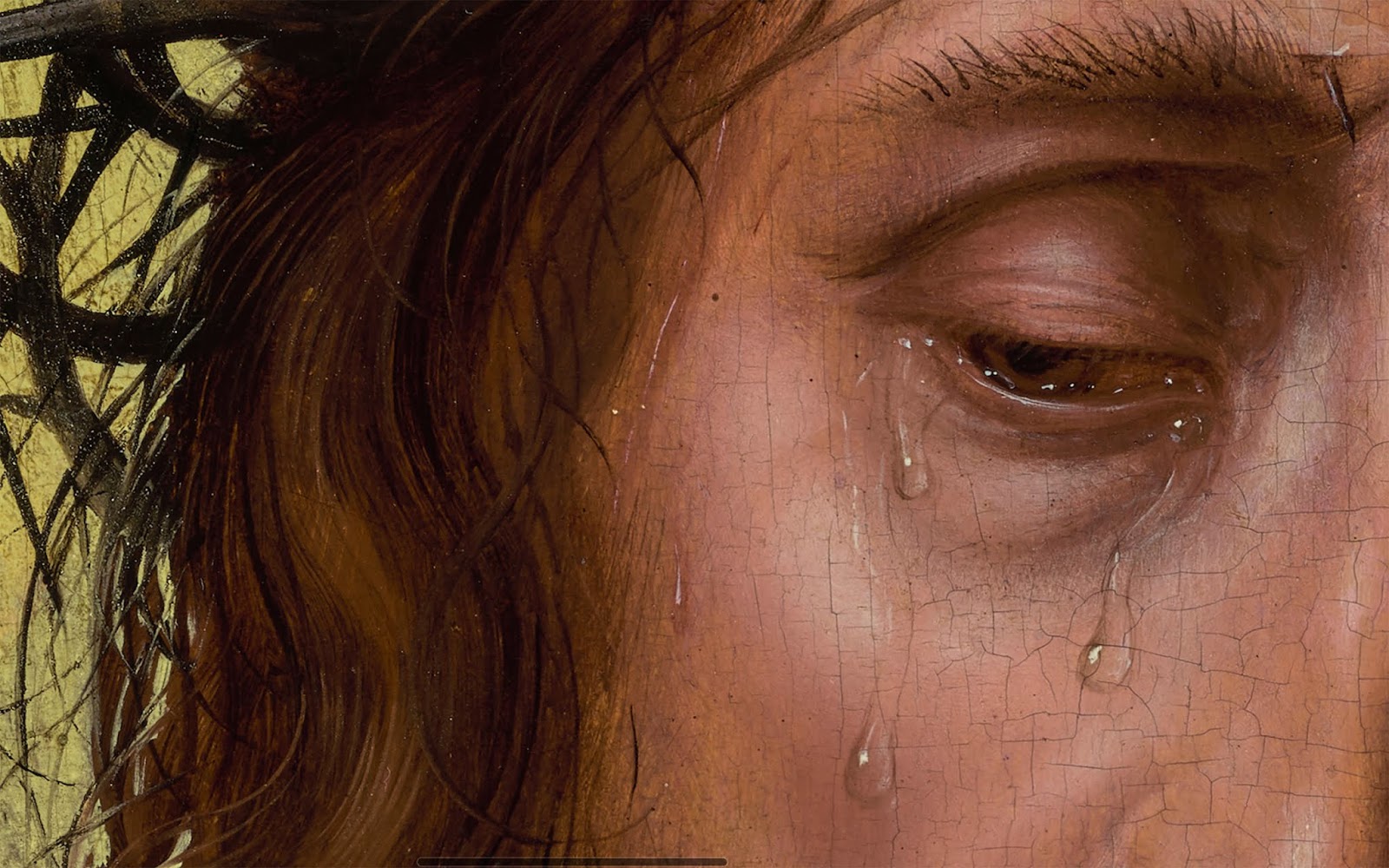 It's believed the Getty Metsys was half of a diptych, paired with a now-lost Madonna and Child. Originally rounded at top, it came to the Getty with later additions squaring it out. The museum commissioned an oak frame concealing the additions while preserving them. The frame's arch directs the eyes to the most prominent feature, the crown of thorns. These are a surreal torture with an almost H.R. Giger vibe. Thorns tear into the flesh, one piercing an eyebrow.
Metsys and Leonardo shared an interest in the juxtaposition of beauty and ugliness. Metsys' Ill-Matched Lovers, in the National Gallery of Art, Washington, invents a visual universe in which the beautiful and the caricatural coexist. Though mismatched couples were already a subject in Early Netherlandish art, Metsys shocked with the new verisimilitude.
Leonardo was exploring similar themes in his drawings. The Getty owns a tiny Leonardo Caricature of a Man With Bushy Hair (about 1495). It was recently on view in the Getty's micro-nano Leonardo 500 observance.
The Getty drawing was probably once part of a sheet of seven caricatures that some long-ago gallerist cut up for profit. A studio copy of the presumed original sheet is in Venice's Academy.
Feast your eyes on this red chalk drawing from Leonardo's studio. It relates to a painting in the National Gallery, London.
The London painting is by Quentin Metsys, not Leonardo. Cataloged as An Old Woman (formerly A Grotesque Old Woman and still better known as The Ugly Duchess), it's impossible to un-see. It's become Metsys' Mona Lisa, the one painting that gets more attention than everything else a versatile artist did.

It had been taken as a given that Leonardo (the A-list genius) must have done the chalk drawing first. Then Metsys (a genius, second-rank) must have worked up the design into a painting. Recent scholarship proposes the opposite. Leonardo & Co. copied Metsys. The London painting is more detailed and strange; it includes the hands, which are difficult to draw and might be omitted by a copyist.

There is a theory that Metsys' painting is not a caricature but a likeness of a woman with an unfortunate medical condition, Paget's disease. I find the theory interesting yet somewhere short of a slam-dunk. The fancy dress and rosebud held over withered cleavage demand to be taken as a caricature of vanity. It's possible that Metsys was inspired by a Felliniesque woman (who may or may not have had a certain 21st-century diagnosis) and exaggerated her features and painted her in clothes that weren't hers. That's how caricature works. 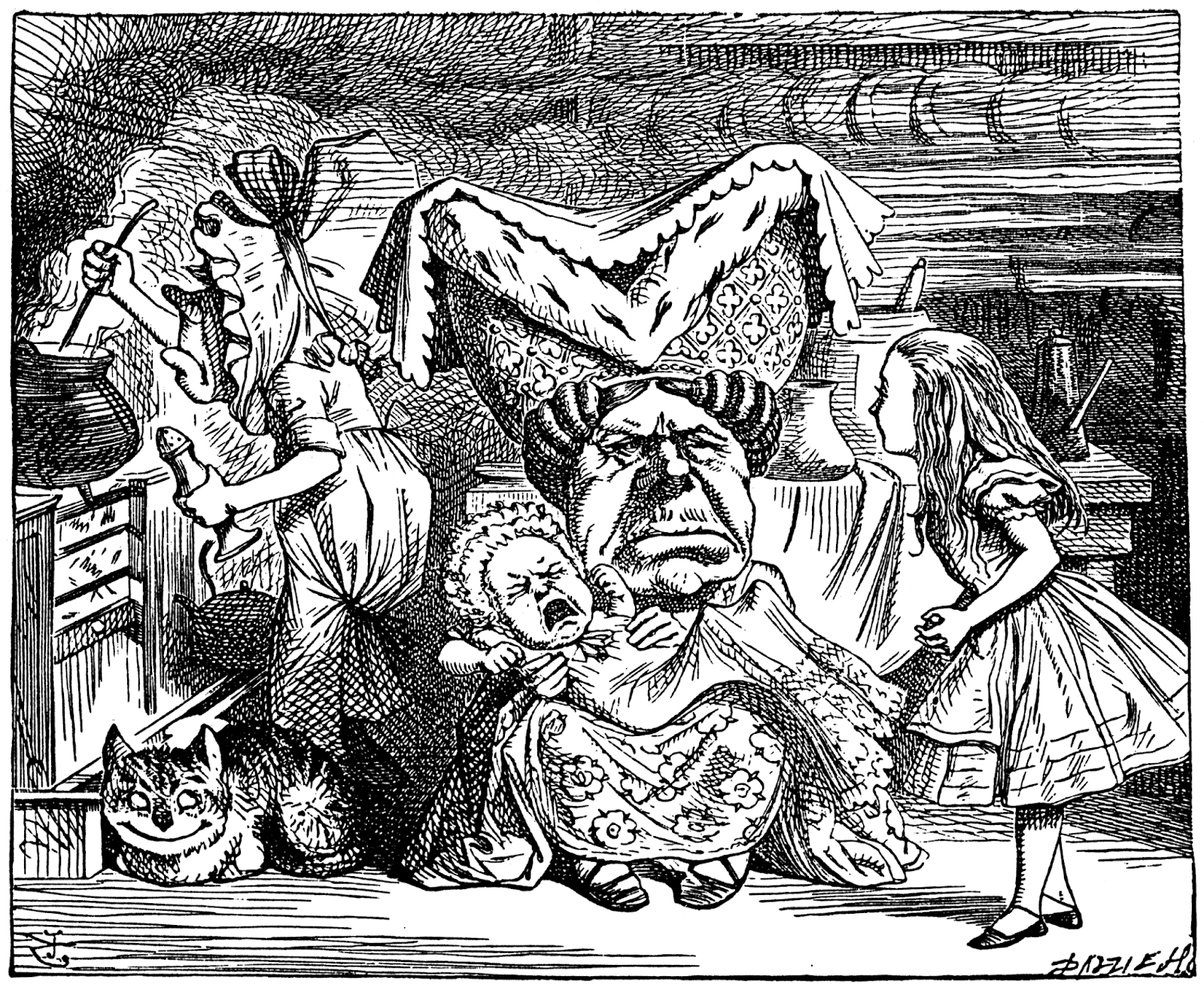 John Tenniel adopted the Metsys painting for his illustration of the Duchess in Lewis Carroll's Alice in Wonderland. Stage and film versions of Alice have cast grumpy old men as the Duchess. Tim Burton's Alice in Wonderland (2010) uses digital f/x as Metsys did oil paint, to test the limits of the uncanny.
The Getty's Christ as the Man of Sorrows was reassigned to Metsys only in 2016, after scholars noted the similarity to to the artist's Ecce Homo in the Doge's Palace. Like the Ill-Matched Lovers, the Venice picture mixes normals and weirdos.
In the Getty painting Metsys zooms in on Jesus, the most human figure of the lot. Isolated in an acid-yellow radiance, it has a numinous quality lacking in the Venice painting.

Metsys did other headshots of Christ. One, discovered in in 2006 in a British church, was sold for £1.5 million to finance the church's restoration. Another is owned by Jeff Koons. It's a 3/4 view with gold lines shooting through a yellow and blue aura.
The Getty painting is the best of the lot. Metsys reminds us that to be human is to be beautiful, grotesque, and divine. 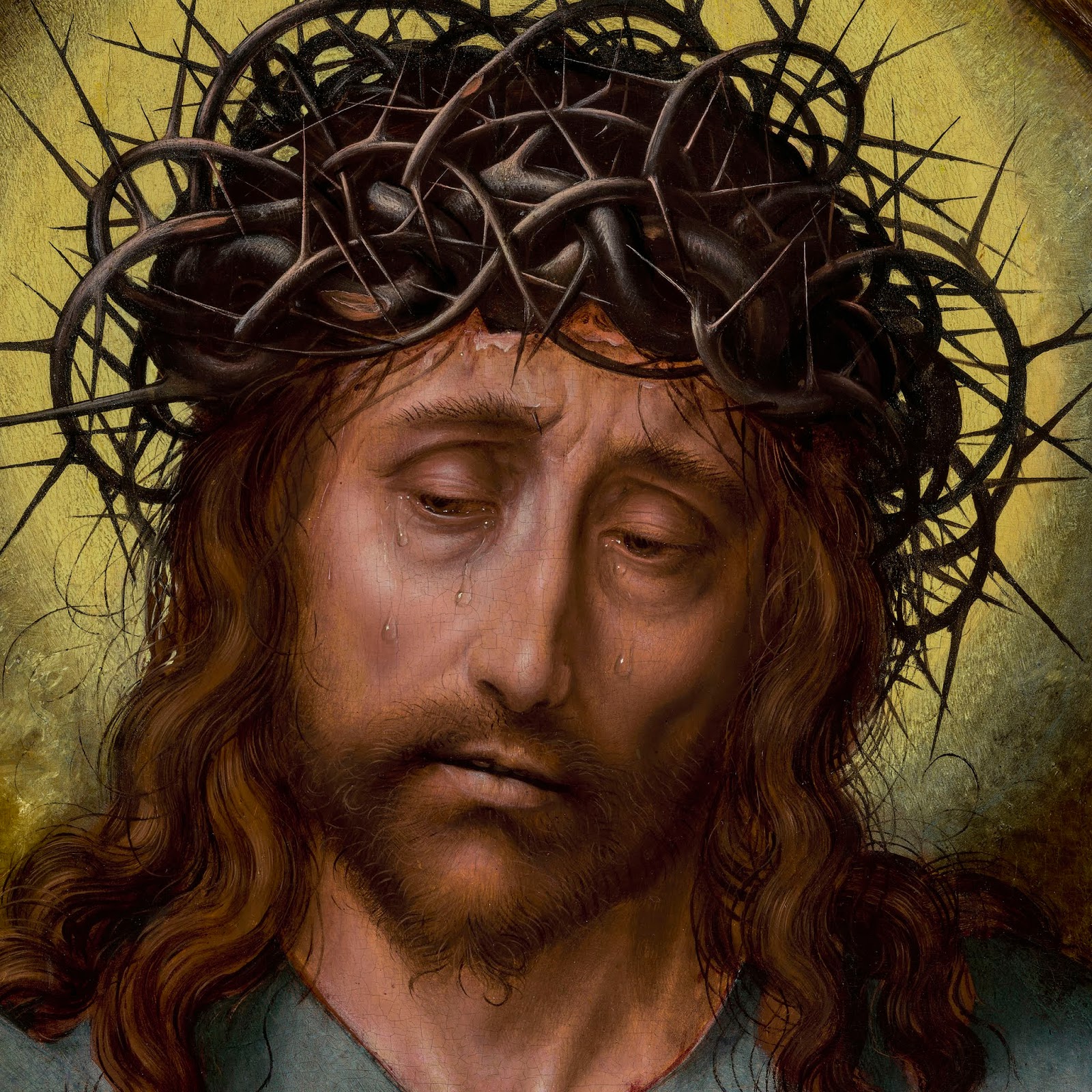 Anonymous said…
I didn't realize there was at least one small work by da Vinci in an LA collection. I thought the only one had been in the Hammer, before it foolishly sold its Codex Leicester to Bill Gates several years ago.

Such missteps make me think of what Barry Munitz was doing to the Getty over 12 years ago or what Michael Govan is doing to LACMA today.
June 24, 2019 at 8:33 AM

Alex Parish said…
For one to simultaneously speak to “qualities” in respective paintings, and also say he has never even actually seen one of them shows profound ignorance and a lack of true understanding of old masters. Not that that will keep you from being quoted or getting your name on the internet.
June 30, 2019 at 7:03 AM