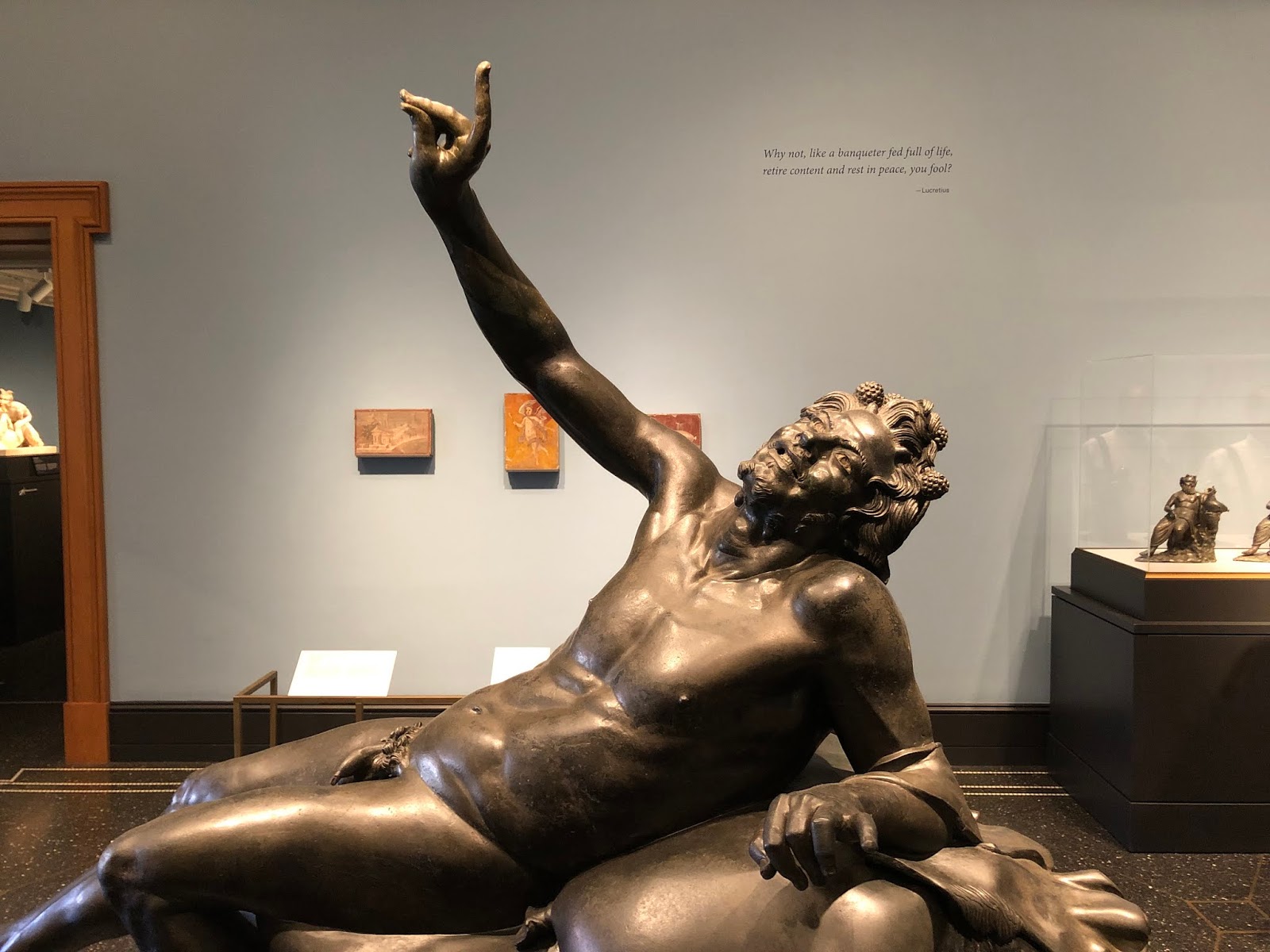 In the 1970s J. Paul Getty scandalized the art/architecture world with his plan to create a replica of the Roman Villa dei Papiri on the Malibu coastline. A further provocation was that Getty commissioned the Chiurazzi Foundry, Naples, to produce replicas of the original Villa's sculptures for display in the garden.

This summer, many of the original sculptures from Herculaneum are on view in Southern California in the Getty Villa exhibition "Buried by Vesuvius: Treasures from the Villa dei Papiri" (through Oct. 27, 2019). Consequently some of the loans will look familiar to Getty visitors, such as the Drunken Satyr (top of post), the paired Runners, and two of the stately women striking poses in the museum's Inner Peristyle Garden. Aggressively restored in the 18th century, and recently conserved at the Getty, the 2000-year-old statues look nearly as pristine as J. Paul Getty's 20th-century knock-offs.
Above all, "Buried by Vesuvius" explores the Villa dei Papiri's unique role in our ongoing rediscovery of Greco-Roman culture. The Villa contained not only art but books. Eighteenth-century excavators discovered carbonized scrolls stacked like cordwood. They were mistaken for logs until one was dropped and cracked open, revealing writing inside.
The exhibition has several black, brittle scrolls (resembling lumps of charcoal) and a steampunk machine for unrolling them. Most of the recovered texts were by Philodemus of Gadara, a follower of Epicurus. The Villa library has supplied the modern world's best understanding of Epicurianism.

Like atom, "Epicurean" is a Greek term that has survived to the present day, with changes. Today the word is hardly more than a synonym for "foodie." The Greek philosopher Epicurus (341–270 BC) said that a fine slice of cheese could be worth a whole banquet. Food, however, was a metaphor. Epicurus' doctrine was a blend of hedonism and existentialism. Though he did not deny the gods, Epicurus said they wouldn't lift a finger to help us. We are on our own. Despite that, death is not to be feared—though it really is the end, a dissolution into atoms. Bottom line: Make the best of whatever time you've got. The wise should aspire to pleasure, in moderation, in the company of good friends.
The rediscovery of Epicurus is ongoing. Some scrolls are being scanned with a 3D-visualization device in UCLA's dental department. Machine-learning algorithms will "read" the text without unrolling. This is where archeology and artificial intelligence meet. 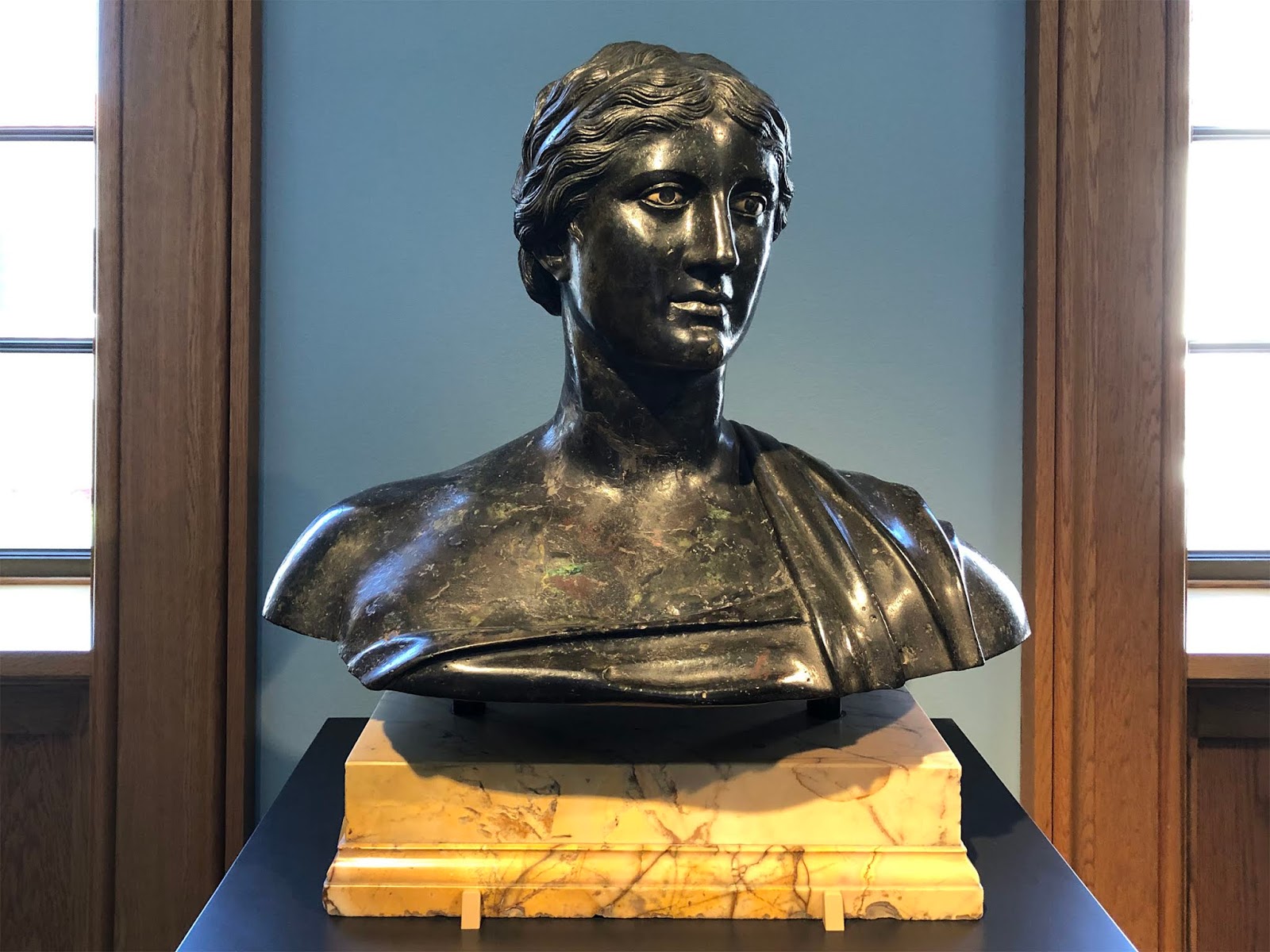 Epicurus admitted women to his school. A bronze bust from the Villa dei Papiri was once identified as a portrait of Sappho, the Greek poet. It's more recently been proposed as a portrait of one of Epicurus' women students. Epicurus praised a certain Leontion, a prostitute turned thought leader.

Maybe things haven't changed as much as we think. "Buried by Vesuvius" has a tri-lingual trigger warning. It's all to view a marble sculpture of Pan having his way with a goat. It's weird, but it's not going to freak out the kids or the in-laws. 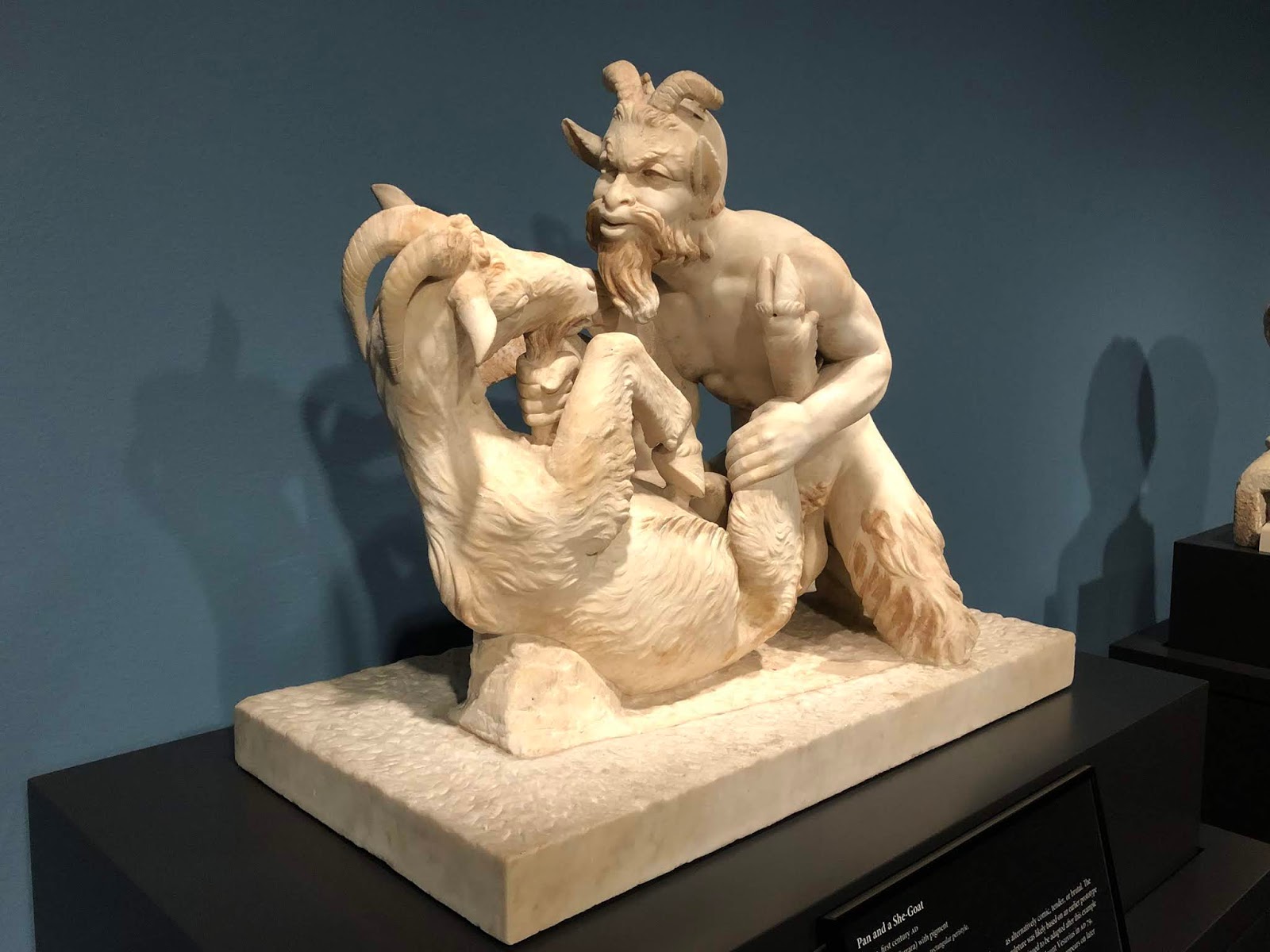 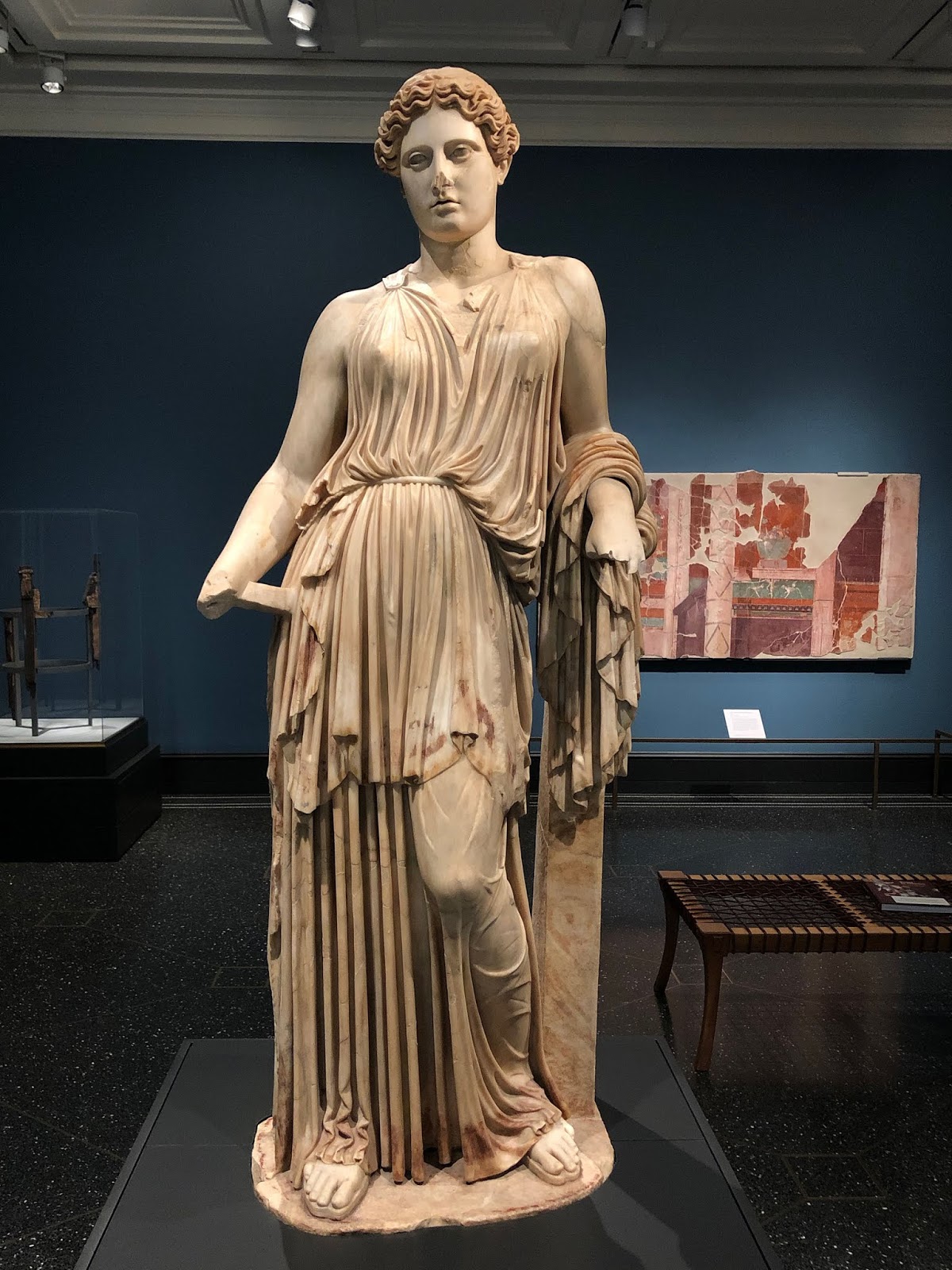 The exhibition's final room shows recent discoveries. Starting in the 1990s, excavations at the Villa dei Papiri resumed, using modern best practices. Archeologists discovered a seaside pavilion and recovered a marble statue of a woman (Demeter or Hera?), ivory reliefs from a disintegrated tripod, and a color fresco wall painting of a vine growing through an illusory window. 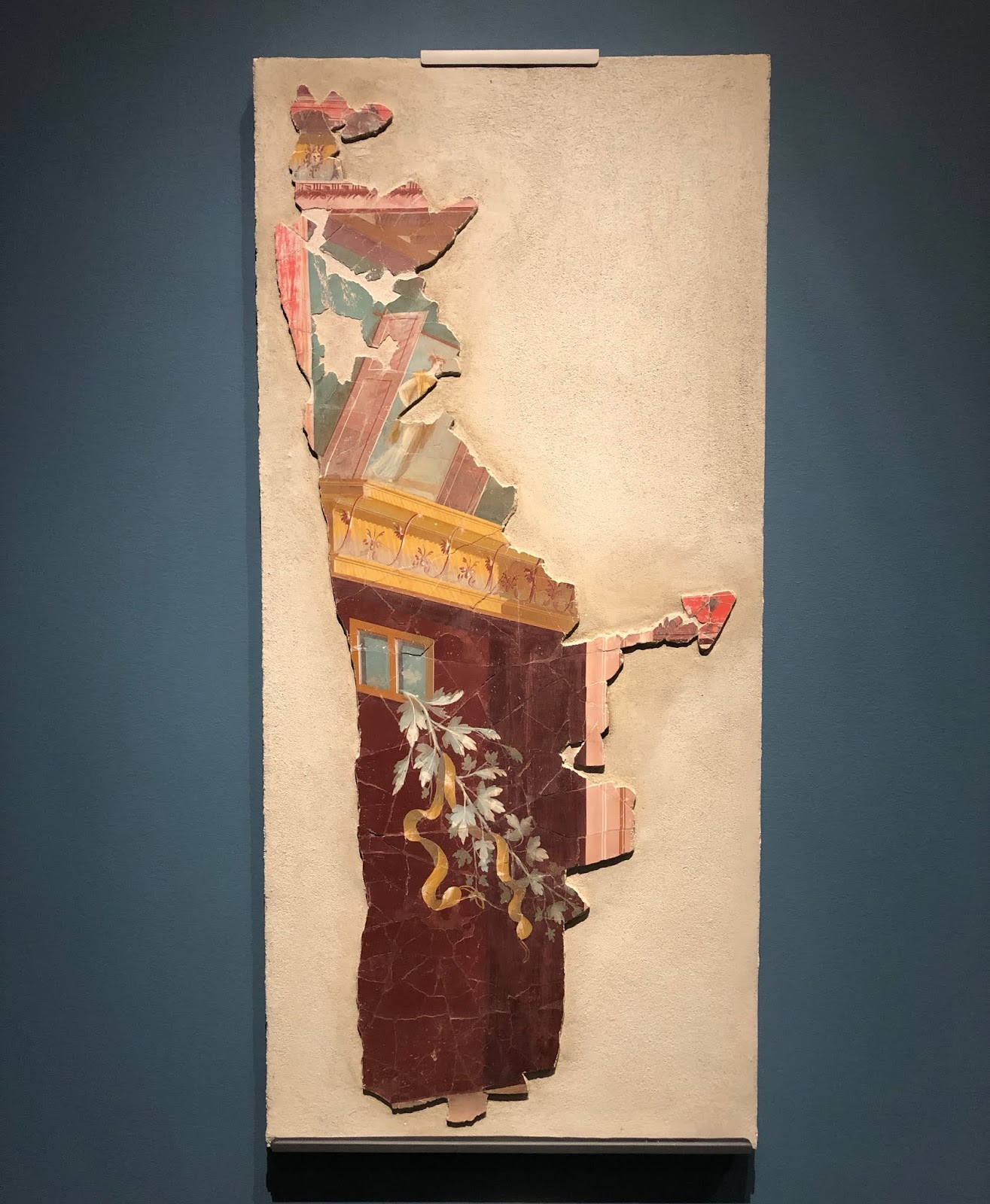 P.S. Rival philosophers dismissed the Epicureans as "pigs" who cared only for their hedonistic slop. The Epicureans apparently took this as a badge of honor. On view is a bronze piglet. It would have been too small to join the bronze deer in the Getty Villa garden.

Even smaller is a iPhone-size sundial in the shape of a prosciutto ham. A missing tail served as the gnomon. The gallery label says: "Its unique shape may be a playful link to Epicurean philosophy, with the pig as symbol of tranquility and freedom from fear of death: piglet today, pork tomorrow—carpe diem."