Zak Ové's The Invisible Man and the Masque of Blackness has just gone on view at LACMA. It consists of 40 resin-and-graphite statues reproducing a small African carving the artist's filmmaker father gave him. The title references Ralph Ellison's 1952 novel Invisible Man and Ben Johnson's notorious blackface play The Masque of Blackness, performed by Queen Anne and her court in 1605. There's a lot to unpack—and more so at LACMA, where Ové's figures mingle with the Rodins in the Cantor Sculpture Garden. Some ascend Hardy Holzman Pfeiffer's very 1980s staircase.
In previous showings The Invisible Man's figures have always always been arrayed in a phalanx (with no other sculptures intervening). The piece debuted at the 1:54 art fair at Somerset House, London, in 2016 and has since been shown at Yorkshire Sculpture Park and in San Francisco, in front of City Hall. 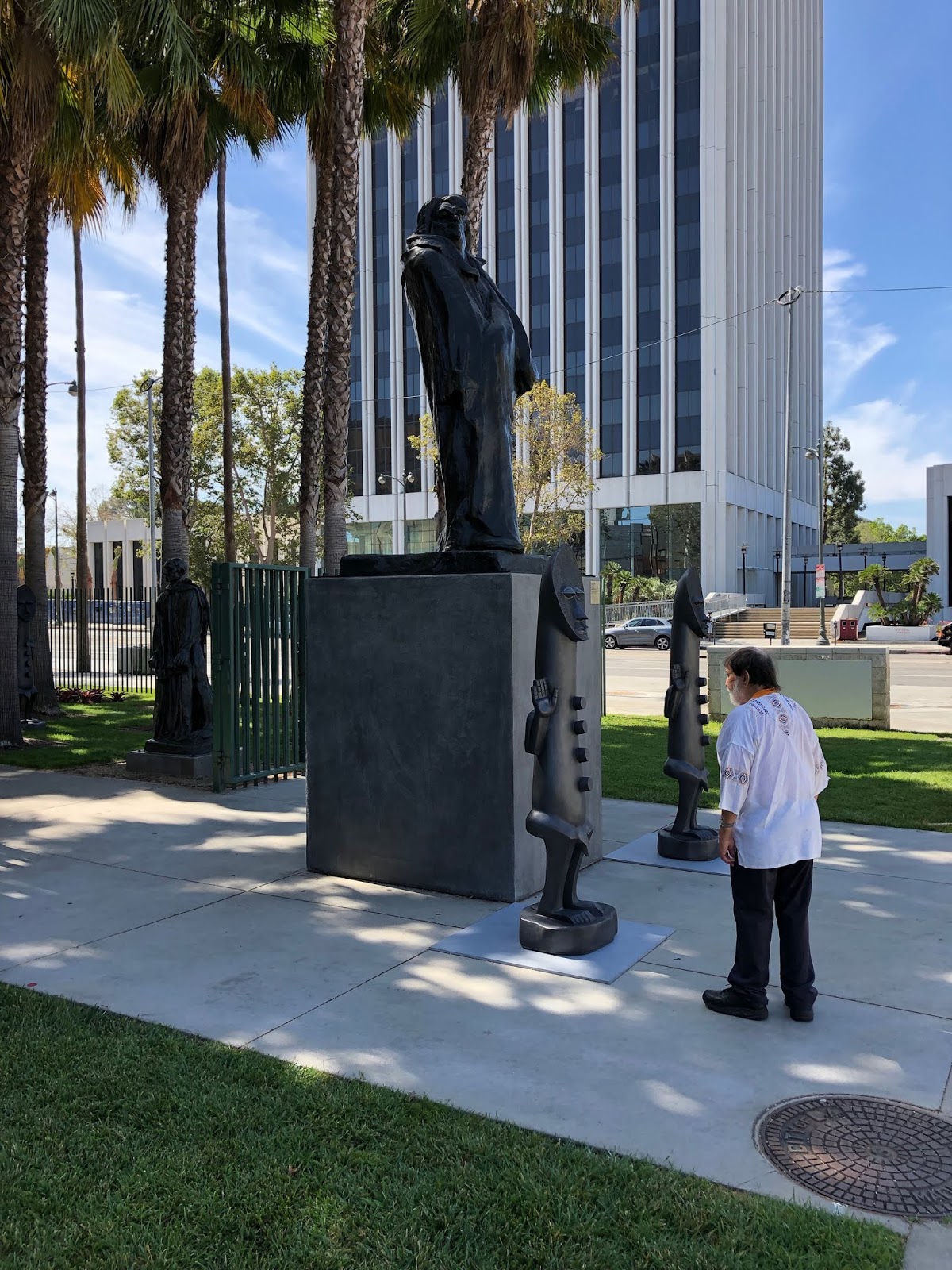 At LACMA Ové's meditation on the African diaspora competes for attention with bronze interlopers: Adam and Orpheus and Jean de Fiennes. The raised hands of Ové's figures can be read as resistance or surrender. At LACMA, the message seems to be, please don't touch the Balzac statue.

Anonymous said…
LACMA has never had enough money to properly upgrade the museum's grounds. That includes its elementary-school-type entrance and major portions of the Cantor gardens.

The other changes through the years, including what originally was the Anderson building (never completely integrated with the other galleries and central courtyard) and the Ahmanson addition in the early 1980s (which looked like a do-it-yourself room extension), have always had a whiff of "our checks are about to start bouncing."

Yet, LACMA was recently described as one of the most indebted museums in the country.

Anonymous said…
Anonymous, Can you please stop hijacking every comment section related to LACMA and turning it into a thing about Michael Govan? I’d like to read relevant comments about the actual art, instead of this constant spam you keep posting (on anything hashtagged LACMA) about the campus redo or Govan, for once. Seriously, no one important at city hall is reading this and will encourage them to stop LACMA if that’s what you’re thinking.
July 29, 2019 at 8:24 PM

By the way, isn't retirement to the south of France or Hawaii something you'd like to do nowadays? After all, a big earthquake is predicted to hit LA in the future. Best to get out when you can.
July 29, 2019 at 9:34 PM