Rudi Gernreich and the Monokini

The designs of Rudi Gernreich (1922-1985) are kooky, androgynous, and often wildly impractical. Gernreich made fashion a conceptual art, and a political one. He created mini-skirts for men and tweedy suits for women. His two easiest-to-explain innovations are the topless bathing suit ("monokini") and the thong.

The Skirball Center's "Fearless Fashion: Rudi Gernreich" seems utterly of the moment (more so than the Met's "Camp"). Gernreich was no less grounded in L.A.'s 1960s art scene, a face in the crowd of LACMA's 1968 portrait of the Cool School. In fact, Gernreich may have been the one household-name celebrity sitting on LACMA's steps. That's due to the monokini. 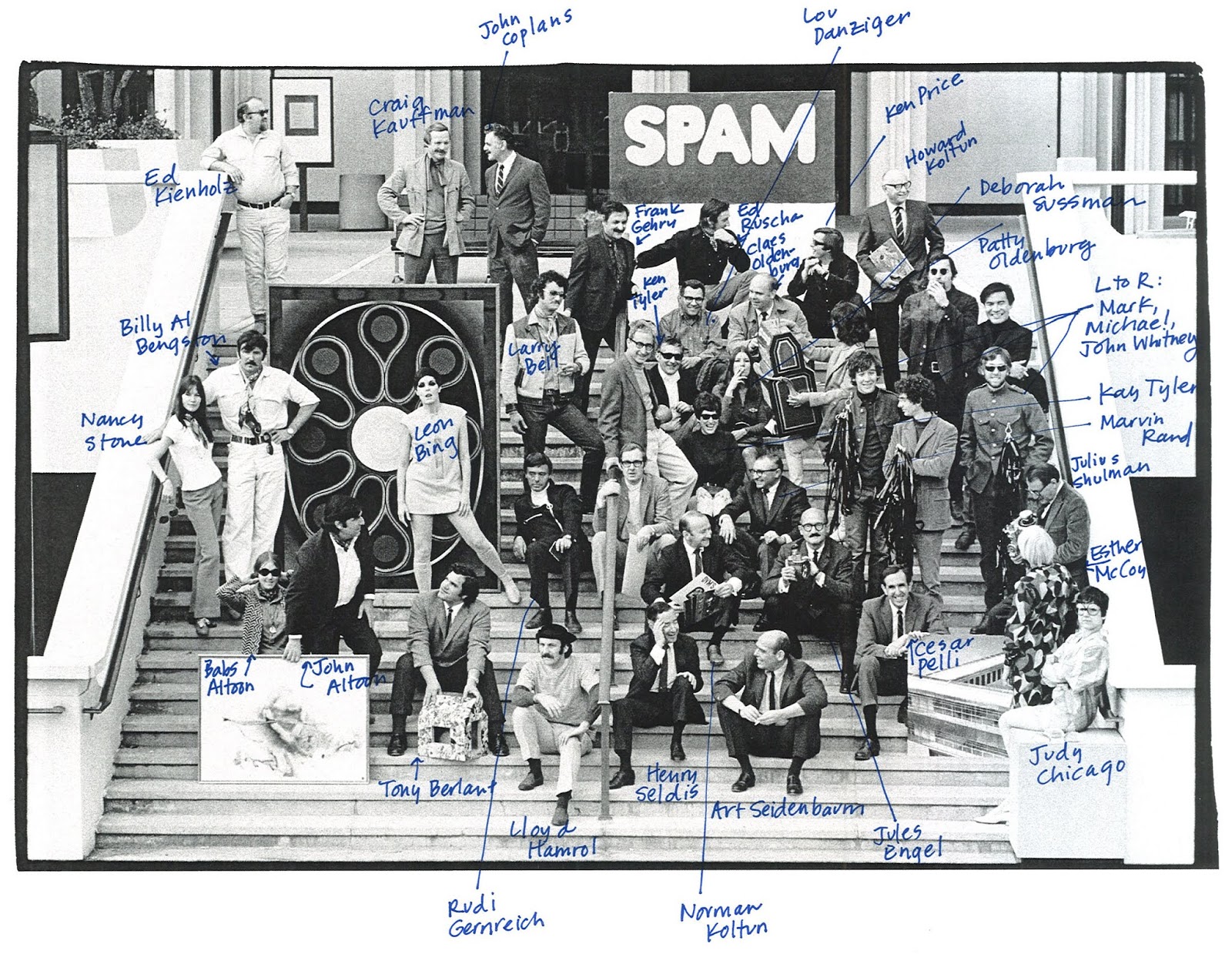 The story of the topless bathing suit begins with Adolf Hitler. When Germany annexed Austria in 1938, Hitler banned public nudity with an executive order. The Post-Freudian Viennese had taken to exercising in the nude, regarding it as healthy. Among those who fled the Nazi regime was widowed Jewish mother Elizabeth Gernreich and her 16-year-old son Rudi. They came to America, where Rudi launched an L.A. career as dancer, fashion designer, and gay activist. He was a founder of the Mattachine Society, an early gay rights organization.

Throughout his life, Gernreich retained the free, Viennese attitude to nudity. This was reflected above all in his swimsuits. In a 1962 issue of Women's Wear Daily, Gernreich declared: "Bosoms will be uncovered within five years." Thereafter journalists kept pressing him for specifics. "It was my prediction," Gernreich recalled. "For the sake of history, I didn't want [Emilio] Pucci to do it first."
So Gernreich designed a topless bathing suit. You might think that would simply be a bikini bottom. That was the problem. Gernreich wanted a unique design to call his own. The one he settled on covers more skin than a bikini does. It extends from upper thighs to midriff, held up by two straps that go between the breasts and over the shoulders. Gernreich called it a "monokini," a name that never made much sense. The already popular bikini was the name of an atomic-test island in Micronesia, and the "bi" doesn't mean two-piece.

Gernreich did not intend to produce the monokini commercially. But Vogue's Diana Vreeland told him that a design doesn't exist unless there are pictures. So Gernreich flew five models to the Bahamas for a photo-shoot. All five refused the shoot when they found out their breasts would be exposed. The photographer recruited an island prostitute to model the swimsuit. Look magazine published a shot of the woman from the back.
The best-known images of the monokini are of Gernreich's quintessential model, Peggy Moffitt. They were taken by Moffitt's husband, photographer William Claxton, and offered to Life magazine. The editors told Claxton that they could never print breasts unless the woman was an "aborigine." Claxton did another shot with Moffitt covering her breasts with her arms. Life published that image, but soon afterwards Women's Wear Daily ran the more revealing photo.

Gernreich's monokinis went on sale at I. Magnin, B. Altman, and Lord and Taylor. They sold 3000 of them at $24 each (about $200 in today's money). There is scant documentation of anyone wearing them in public, however, and the few who dared made the news. San Francisco burlesque performer Carol Doda wore one in her nightclub act, thereby launching a "topless" career. Model Toni Lee Shelley wore a monokini on a Lake Michigan beach and was promptly detained by Chicago police.

Life magazine writer Shana Alexander offered a level-headed assessment: "Once you get over the shock, which takes about 10 minutes, the new suit begins to strike you as the most absurd garment since those two rascally weavers manufactured the emperor's new clothes. The new suit is no good for swimming, because it falls off, and it is no good for sunning, because it leaves disastrous strap marks."

The Pope forbade Catholics to wear topless bathing suits. Denmark, Greece, and the Netherlands banned them, and in the Soviet Union they were offered as proof of American decadence.

It is now easy to read the monokini as the triumph of the Playboy-era male gaze. But Gernreich and Moffitt spoke of it in feminist terms. Gernreich told Vreeland that the monokini represented "freedom—in fashion as well as every other facet of life."

"Rudi's aim was to free the breast rather than glorify it sexually," said Moffitt. She called the monokini "a political statement."
Gernreich's influence persists, often in unexpected ways. The models for Gernreich's 1970 Unisex collection had shaved heads and eyebrows, a starkly androgynous look that young filmmaker George Lucas adopted for his first film, THX 1138.

"He borrowed from the future," Ed Ruscha said of Gernreich. Larry Bell, credited as a supporter of the Skirball show, wrote a 1972 letter to Gernreich saying that "knowing that there are artists doing things other than painting etc like yourself makes life that much better."

Most political artists preach to a choir. For a few pivotal years Gernreich had everyone's attention, broadcasting the message that gender is a costumed performance—make of that what you will.

el saturn research said…
It’s wonderful to see that photo of LACMA’s steps, and to hear if LIFE magazine’s dedication to distinguishing the breasts of white women form “aboriginals” and think, “Progress is slow but possible. “ I think LACMA needs to take another photo-or maybe they already have!!
August 2, 2019 at 3:40 PM

One Piece Monokinis said…
Thank for sharing with us.

LuxFetish said…
It is a very informative and useful post thanks it is good material to read this post increases my knowledge.
October 28, 2021 at 10:20 PM