Edward Tufte is best known for his critiques of tarted-up, dumbed-down charts and business graphics in the age of PowerPoint. Some of Tufte's philosophy could well apply to museum exhibition design. There's an intriguing example of that in LACMA's new Korean galleries. The most ravishing wall display houses the least important objects: 121 ceramic shards from a historic collection assembled by two Japanese connoisseurs, Noritaka and Takumi Asakawa, and donated to LACMA in 1986 by Gregory Henderson. 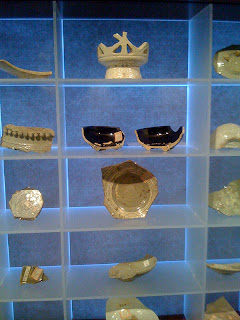 None of the fragments herein would normally be on view as an artwork. Their significance is purely as clues for reconstructing the history of long-vanished kilns. The shards appear against backlighted Korean paper in colors keyed to those on a map. The fragments' role as data must be lost on 99.9+ percent of viewers, who won't bother to match colors or attempt any archeological deductions. That's okay. At a gut level, the display is oddly appealing. This is Tufte's thesis—data is beautiful.
Email Post
Labels: Edward Tufte LACMA