UC Irvine may finally get the campus art museum envisioned in William Pereira's 1962 master plan. Under a recently announced deal, Joan Irvine Smith's collection of California Impressionist painting, now at the Irvine Museum, will be donated to UC Irvine. The gift is contingent on construction of a new museum on campus.
Irvine Museum president James Irvine Swinden envisions a "world-class museum… We are so pleased to contribute to the original vision for the campus outlined by its architect, William Pereira, which included an art museum."
No architect has been announced. They don't seem to be thinking of using Pereira's intended site or any architectural ideas he had for the museum.
Hey—Pereira designed another art museum in the 1960s, and it's about to be torn down! Yes, LACMA would probably let UC Irvine cart away its Pereira buildings for free.
• It would placate the Restore-and-Don't-Replace-the-Pereira crowd.
• As a thought experiment, moving LACMA 50 miles on the 405 would get more free media and social net hits than the Heizer rock and Endeavour space shuttle put together.
• OK, they couldn't realistically move the whole building. They might move part of it. MoMA saved the 63 Tod Williams-Billie Tsien copper-bronze panels of the American Folk Art Museum facade, presumably so that they might one day find a worthy home. What part of Pereira-LACMA should be preserved as iconic? Anybody???

• The lines of the 1965 LACMA campus would fit in with Pereira's UC Irvine, constructed at nearly the same time. Later UC Irvine additions by postmoderns like Charles Moore have been faulted for not fitting in. Frank Gehry's 1986 computer science building was demolished.
• The Ahmanson Building, or even a small portion of it, has far more space than Irvine needs, allowing plenty of room for future expansion (more than can be said for Zumthor-LACMA). If UC Irvine is serious about a world-class museum, it won't get there on California Impressionism alone.
(Below, a still from 1972's Conquest of the Planet of the Apes, shot against Pereira's Irvine brutalism.) 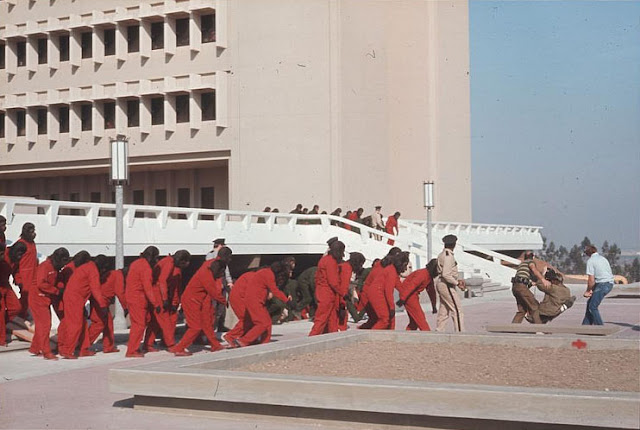